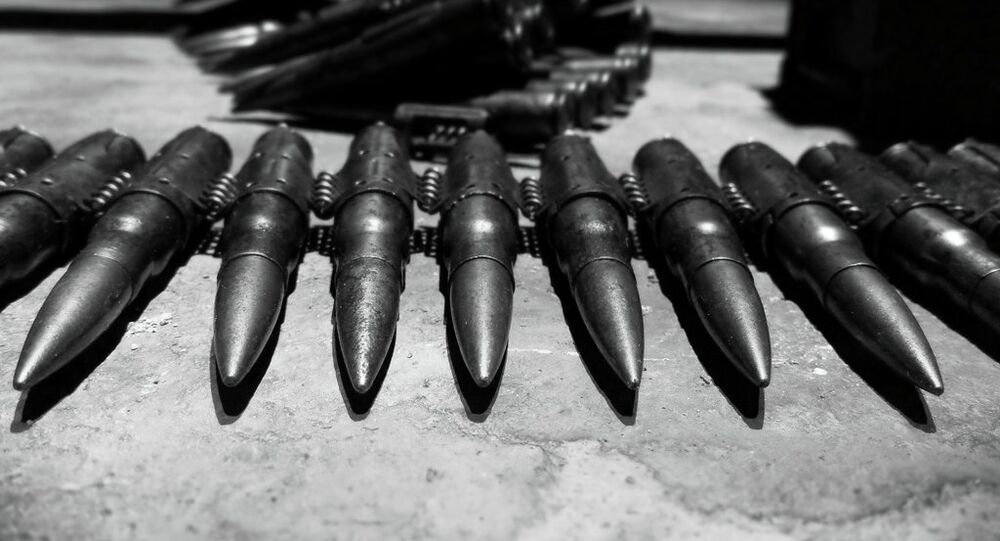 Follow the Arms: The Top 5 Hidden Stories Revealed by the SIPRI Report

The Stockholm International Peace Research Institute (SIPRI) released its regular report highlighting the major trends in the international arms trade over the past five years.

The SIPRI report has already been much discussed by the media and various analysts since its debut last week, with many addressing the headline-grabbing trends published in the document.

While developments like India’s rise as the world’s largest arms consumer and China’s surge in weapons shipments are certainly worthy of examination, it shouldn’t be at the expense of other trends that are just as important, albeit slightly more hidden to the untrained eye. The following are the top five major stories surrounding the SIPRI report that the mainstream media is neglecting to discuss.

© AP Photo / Saurabh Das
India Envisages Arms Exports to 38 Countries - Defense Minister
Israel has increased its arms shipments by nearly 30% in the past five years, with sales to India constituting a whopping 46% of all exports. Driven by Indian demand, Israel is the number ten arms exporter in the world. India receives 7% of all its weapons from Israel, which makes Tel Aviv its third-largest arms partner. It’s important to note that SIPRI acknowledges Israel as one of the world’s leaders in drone exports, meaning that it’s very likely that the country is proliferating this technology to the Indian market.

The deepening ties between Israel and India are significant because they demonstrate that the two states have a confluence of perceived interests that can be capitalized upon to deepen their partnership in all sectors. Netanyahu even remarked during a visit to India last September that “the sky is the limit” for bilateral relations, and judging by the burgeoning arms trade between the two over the past half-decade, this certainly seems to be the case.

To its credit, the SIPRI report does address the fact that rivals Algeria and Morocco are building up their arms supply, but it doesn’t provide any direct context into why this is the case. Both North African states have been intense rivals since independence and a brief border conflict in the 1960s, which has contributed to the stalemate in Western Sahara, a de-facto Algerian-Morocco proxy war that has stretched on for decades.

While the SIPRI document does make mention of the statistics behind both countries’ arms buildup, it doesn’t explicitly connect the dots and call it out for what it is – a hangover of the French-Russian proxy rivalry in the region.

Morocco’s arms imports have experienced an elevenfold increase, giving it a 26% share in all of Africa’s weapons purchases, the second-largest on the continent behind Algeria. France’s number one arms customer is Morocco, which is responsible for 18% of Paris’ weapons exports. Looking at Algeria, the country commands 30% of all African arms imports and 8% of Russia’s weapons exports go there, making it Moscow’s third most important client.

It’s clear that the Cold War never ended in Northwest Africa, and the Algeria-Morocco arms race, as well as Russia and France’s sponsorship of it, is clear evidence of this. The ultimate irony, however, is that both states have more to fear nowadays from asymmetrical threats like terrorism and Color Revolutions than from one another, yet their military buildup continues unabated.

© Sputnik / Alexei Danichev
China Overtakes France in Arms Export After Paris Failed With Mistral Deal
China has become the world’s third-largest arms exporter, and over 2/3 of its shipments go to three countries that border India; Pakistan, Bangladesh, and Myanmar. This isn’t incidental, as it provides evidence that China is tangibly working to hedge its security interests against India. Everybody already knows that India and Pakistan are fierce rivals and that Beijing has accordingly courted Islamabad as a counter to New Delhi, but what’s new is the statistical proof that confirms this.

Pakistan is far ahead of the pack as China’s number one arms customer, accounting for 41% of all exports, followed by Bangladesh (16%) and Myanmar (12%). Chinese sales to all three countries have exploded in the past five years, since Beijing’s overall arms exports have jumped 143% during this period.

While Bangladesh is indebted to India for its independence from Pakistan (it used to be the former “East Pakistan” prior to that), it hasn’t always been on good terms with its gargantuan neighbor. A dispute over illegal immigration and fears of Islamic terrorist infiltration dominate bilateral relations, and India has been weary of Bangladesh’s strong turn towards China.

Myanmar is a bit different, since it’s been a more traditional Chinese ally over the past few decades, but it’s wracked with internal strife and ethnic secessionism.

The Chinese weapons are intended to quell the rebellions and restore stability to the country, after which it’s likely that the military would then transition into a more conventional force that could potentially project influence in India’s vulnerable and ethnically divided northeast provinces. When all of this is viewed from the Indian perspective, it makes New Delhi feel as though it’s being surrounded by a ring of pro-Chinese militaries, whether or not this is objectively the case, which further heightens its threat assessment of Beijing in general.

The New ‘Pact Of Steel’

One of the most startling trends hidden in plain sight within the SIPRI report is the formation of a new ‘Pact of Steel’, namely, a group of ideological allies that dominate the global weapons trade and circulate munitions amongst one another. Here’s a list of the top exporters:

Now take a look at the largest importers:

© Photo : SIPRI
The 10 largest importers of major weapons and their main suppliers, 2010-14

If the list of exporters is broken down into a list of Western countries, then 7 out of 10 would fulfill this criterion, with the exceptions being Russia, China, and Ukraine. The same thing can be done for the list of importers, with another 7 out of 10 being either Western or Western-aligned countries, whereby India, China, and Pakistan would be the anomalies. While the Western exporters indiscriminately make money on all countries in the world, when it comes to importing, they’re a lot more selective.

One can clearly see that the lion’s share of their imports come from allied states such as the US, France, Germany, or Sweden. This network diplomacy demonstrates that the new ‘Pact of Steel’ conducts a lot of military-industrial trade within its own sphere, preferring to buy from one another than from actors outside their bloc. While the same can also be theoretically said of Russia and China, for example, neither of these two can count boast such ‘impressive’ statistics as the Western Bloc, which together account for 53% of all arms exports and 25% of imports.

© Flickr / UK Ministry of Defence / Cpl Neil Bryden RAF
US Arms Industry Generates Massive Weapons Sales Globally
The elephant in the room that nobody wants to address is the question of what happens to Ukraine’s market share in the armaments industry now that its economy has collapsed. The data included in the report covers 2010-2014, with only the tail end registering Ukraine’s dramatic all-around failure. Even with such chaos ongoing at the time of the study, Ukraine still managed to be ranked as the number nine arms exporter in the world, selling 22%, 10%, and 9% of its wares to China, Russia, and Thailand, respectively. Not only that, but it also accounts for 13% of all Chinese military imports, making it Beijing’s third most valuable partner.

What is not stated in the study is that a considerable amount of Ukraine’s armaments industry was composed of Russian-affiliated companies that are no longer active in the country, hence why Kiev has been forced to beg the NATO and Gulf countries for weapons. Since it’s clearly turning into a net arms importer, it’s likely that it won’t be included anywhere near the top ten exporter list when the next study is completed in the coming five years.

That being said, while Russia is expected to increase its domestic production and replace Kiev in China, there’s still an obvious demand for Ukrainian armament supplies in the score of other countries that received them, which the remaining top ten members will likely fight amongst themselves to fill.