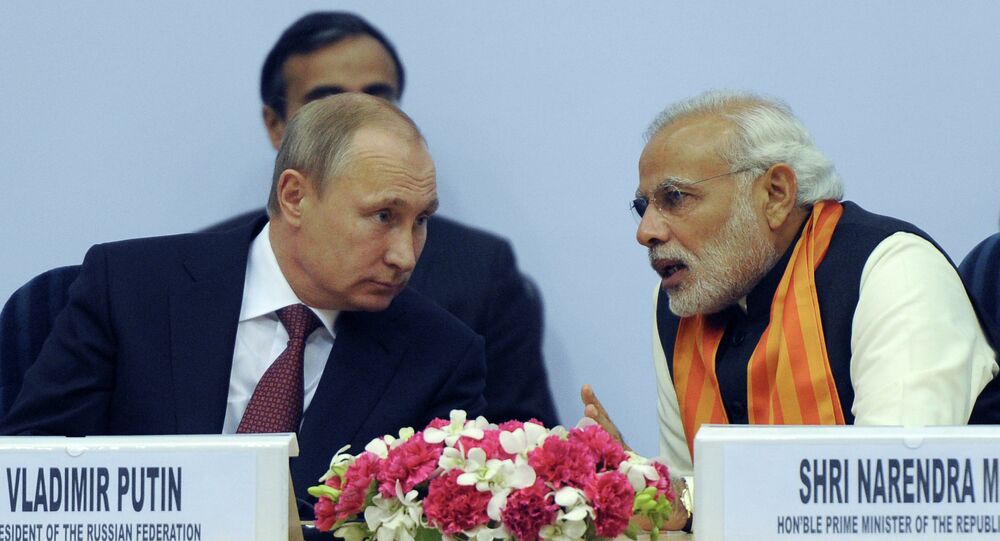 India has unveiled a response to China’s Silk Road projects, which is expected to ramp up the competition between the two Asian colossi.

© AP Photo / Aijaz Rahi
India Tops List of Russian Arms Buyers in 2014
An important three-day conference entitled "Indian Ocean: Renewing the Maritime Trade and Civilisational Linkages" ended last week in Bhubaneswar, whereby multiple experts from nine government agencies and elsewhere announced the ‘Cotton Route' to rival China's Silk Road. The announcement came after Prime Minister Modi's key visit to three Indian Ocean states — the Seychelles, Mauritius, and Sri Lanka — which observers likened to a diplomatic pushback against rising Chinese influence there. With India evidently gearing up to confront China with its own epic trade route plans, it's worthwhile to explore what form this could take and which prospective partners could propel Indian success in this initiative.

India is projected to have two major partners which will form the key continental gateways for its Cotton Route:

Russia and India have been discussing a North-South Corridor which would link their two economies via Iran. In this framework, goods would be shipped from India's Mumbai to Iran's Bandar Abbas, after which they will travel north over the Caspian and reach Russia's Astrakhan port (or perhaps overland through the Caucasus via Azerbaijan), where they could then travel even further afield to Europe. Not only that, but Iran could also be used to bypass Pakistan and connect India to the Central Asian and Afghan markets. Taken even further and if the political situation allows, Iran might even become the middleman in managing Indian-Turkish trade. Thus, Tehran is clearly the key to New Delhi's Eurasian economic future.

Fellow BRICS member South Africa is another forecasted fulcrum for the success of India's Cotton Route, in that its road and rail infrastructure connects to most of the southern reaches of the resource-rich continent and could be a crucial facilitator of intercontinental trade. The Indian diaspora community that remains in the country (a legacy of British colonialism) will likely play a key role in bringing about this vision, and if taken to its completion, then Indian goods might penetrate into Africa in exchange for a share of the continent's natural riches. Indian engagement in the southern cone of Africa could turn out to be beneficial for region's population, too, since South African transit links could help bring African consumer and industrial goods to the megalithic Indian marketplace.

The Cotton Route is also expected to incorporate two pivotal island strategies that will strengthen its viability.

Modi's recent visit to the Indian Ocean island states and the partnerships agreed to during the leadership summits there were significant in demonstrating New Delhi's newfound commitment to the region. Sri Lanka aside (which has a deeper and more complex relationship with India than any other Indian Ocean island state), India aspires to build a strategic presence in the region which could perhaps even entail a shadow military component, much as China has been accused of doing. The guiding concept is for the Seychelles, Mauritius, and perhaps even the Maldives to form a ‘shield' in the Western Indian Ocean that could be used to monitor China's naval presence in the region and extend pressure on its vulnerable trade routes there.

While the Indian Ocean chains have more of a military-strategic role in India's Cotton Route, Indonesia's is mostly economic (for now). The Southeast Asian giant boasts the largest economy of the dynamic ASEAN members, with the majority of it and its population being located in the Sumatra and Java islands abutting the Indian Ocean. This means that they are within convenient distance of India, which makes them obvious partners for any pan-regional trade plans initiated by New Delhi. For its part, Indonesia is seeking to expand its international trade ties and fortify its real non-natural-resource economy in order to become an influential Asian powerhouse, which gives it a complementary motivation to deepen its relationship with India.

The third part of India's Cotton Route will likely be the construction of overland trade paths that run along the India Ocean's rim in both Southeast Asia and East Africa.

India previously announced plans to build a highway through Myanmar that would connect it with the rest of the ASEAN trade group, and this endeavor will surely be integrated into the Cotton Route when it's completed. Creating an overland link between India and ASEAN will supercharge New Delhi's economic reach and allow it to more directly influence regional affairs. Furthermore, India is expected to tap into the soft power goldmine of Hindu culture as it seeks to return to the region, seeing as how it's had a lasting civilizational impact on Southeast Asia throughout the course of history. By coupling economics with culture, India stands a better chance of ‘countering China' than if it relied solely on military means, although it's very probable that this aforementioned element will soon be bolstered if the soft power surge is successful.

This refers to the nickname given to the UK's colonial-era holdings that extended in a straight line along from Egypt to South Africa. In the relevant context, this encompasses East Africa, or put another way, the western rim of the Indian Ocean. New Delhi can encourage its sizeable diaspora community in the area to lay the groundwork for deeper economic engagement between India and the relevant countries (which already have a semi-integrated transport system), in a way which would supplement a similar policy that Modi unveiled last December. At that time, he spoke of assisting Indian Americans with investing in their ancestral homeland, understanding quite acutely that the Indian diaspora (the second-largest in the world with 25 million people) can be an effective international tool for promoting New Delhi's policies. Likewise, the same principle can be applied to East Africa, where the Indian community can be the investment magnet that draws India deeper into the area, with the resultant effect of it serving as a catalyst for increased intra- and interregional integration.