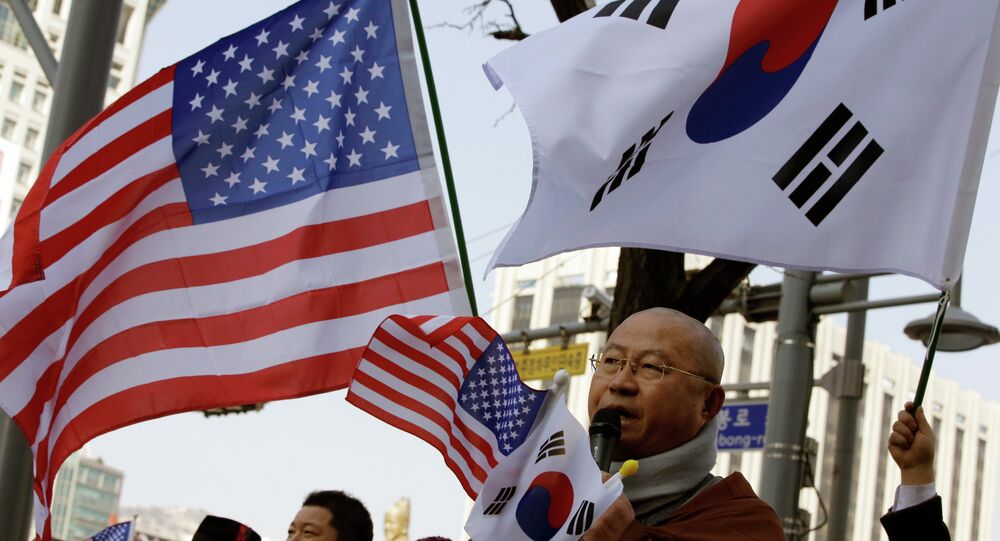 Recent decisions by South Korea raise the question of whether its leadership is becoming more pragmatic in its dealings with Beijing at the expense of Washington.

© Sputnik / Alexei Babushkin
Soft Power: Beijing Offers Seoul to Join AIIB, Reject THAAD Deployment
South Korea is a long-time US ally, but its support for the US is no longer as blind as it once was. Growing economic ties with China through the forthcoming free trade agreement are making the country's foreign policy more balanced, as well as its strategic ambivalence about the US' THAAD missile defense system. While South Korea may not fully switch sides, it looks to be on a trajectory of neutrality and pragmatism, which in and of itself is a relative loss for the US in its Pivot to Asia policy.

Let's take a cursory look at what each of the three main players in this game want to achieve, as this can help give a clearer picture as to why South Korea made the recent economic and military choices that it did:

Ideally, the US wants to integrate the 28,000 troops it has in South Korea into the ‘Chinese Containment Coalition' (CCC) it's building in East and Southeast Asia. It would like to prolong its military presence in the country indefinitely, and hopefully bring South Korea on board its containment plans through a formalized three-way military relationship between Seoul, Washington, and Tokyo. The US doesn't have a real interest in seeing the two Koreas reunified, since this could likely lead to the removal of its half-century-long occupation forces.

Beijing's dream is to see the US completely leave the Korean peninsula, and for the CCC to be broken down or neutralized. It doesn't want to see any destabilization on the Korean peninsula, since this would inevitably carry over into China itself. If the two Koreas reunify, China would cautiously monitor developments to ensure that united Korea doesn't pose an economic or military threat that can be turned against it one day. Still, Beijing would rather have the US leave the peninsula today and deal with any challenges surrounding a united Korea tomorrow than have the Pentagon continue to provoke North Korea in China's backyard.

The most important thing for Seoul is to see a resolution of the two North Korean issues, that is to say, Pyongyang's denuclearization and reunification between both parties. Ideally, it would also like to pursue its historical ‘third way' in balancing between its colossal Chinese and Japanese neighbors, which would entail a policy of neutrality and stability. While South Korea has obviously been under intense American influence since the end of World War II, it appears to be wising up to the fact that a more multipolar policy is the most efficient way to pursue its objectives.

Now it's time to look at the four latest decisions that South Korea made which have led to talk of a potential pivot (and against it):

The US and South Korea agreed last October to delay America's transfer of war-time operational control (‘OpCon') to Seoul until an undetermined time in the future, with the idea being that South Korea is currently incapable of commanding its own forces in the event of a war. The effect has been to prolong direct American control over South Korea's military affairs, meaning that it would literally control its forces in the event of a war with North Korea or China. Even if peace prevails in the long-term, US forces will not be leaving the country for quite some time until then, in what is a clear victory for Washington.

It was only natural that the two sides would reach such an agreement, set to enter into force later this year, since China is South Korea's largest trading partner and South Korea is China's third largest. According to the South China Morning Post, "Chinese investment in Korea jumped 374 per cent to US$631 million last year from US$133 million in 2013" in anticipation of the deal, in a clear demonstration of China's eagerness to expand its business dealings in the country. If economic relations further intensity, then South Korea could potentially enter into China's Free Trade Area of the Asia-Pacific (its counter to the US-led TPP) and even the Asian Infrastructure Investment Bank (China's response to the Western-led World Bank that it's invited South Korea to join if it drops THAAD), which would be an enormous setback for Washington's influence over the peninsular state.

South Korea has been strategically ambivalent about allowing the US' THAAD missile defense system to be deployed on its territory. Seoul acutely understands that the US simply wants to build an East Asia version of its missile defense shield, and by hosting the infrastructure, it would become a complicit member of the CCC. South Korea seems to have misgivings about this, understanding that its relations with China would deteriorate as rapidly as Poland's did with Russia after the former accepted the US' analogous Eastern European counterpart. Should South Korea decide not to become the ‘Asian Poland', then it would be a big blow against the US Pivot to Asia.

…To Be Tricked Into It Later?:

But the US has a trick up its sleeve, in that it's talked South Korea into allowing THAAD to be deployed in the country in the event of vaguely described ‘emergency situations', which could realistically be manipulated North Korean responses to staged American-South Korean war game provocations (as is the norm). Once THAAD is deployed in the country, it's not likely it'll leave after tensions de-escalate, thereby providing the backdoor method for the US to sneakily deploy its missile defense shield inside the country.

Other than South Korea's move towards multipolarity, two other largely unreported trends are also transforming the region. These are South Korea's worsening relations with Japan and North Korea's move towards Russia. The former is the result of renewed Japanese nationalism and militarism, while the latter is due to behind-the-scenes spates between Pyongyang and Beijing. If they continue along their trajectories and are taken to their logical conclusions, these three regional trends will redefine Northeast Asia's geopolitical arrangement in the future, which would lead to three possible developments:

Although the American military presence will likely remain in the foreseeable future, Washington will be less able to influence South Korea to the same extent as it previously did, meaning that its relative power there will decline.

The failure of Japan to restore favorable ties with South Korea would render the CCC ineffective in Northeast Asia, and Tokyo would thus redirect all of its CCC energy southward to Vietnam and the Philippines. Tokyo's already planned these moves, but with South Korea no longer a viable ally, it can focus more efforts southwards.

With South Korea moving closer to China and North Korea doing the same to Russia, the entire dynamic of peninsular politics could be entering a watershed moment. Whereas in the past, the North Korea-China and South Korea-US duality didn't achieve peace after over 50 years, the new arrangement might be more suitable for making progress.