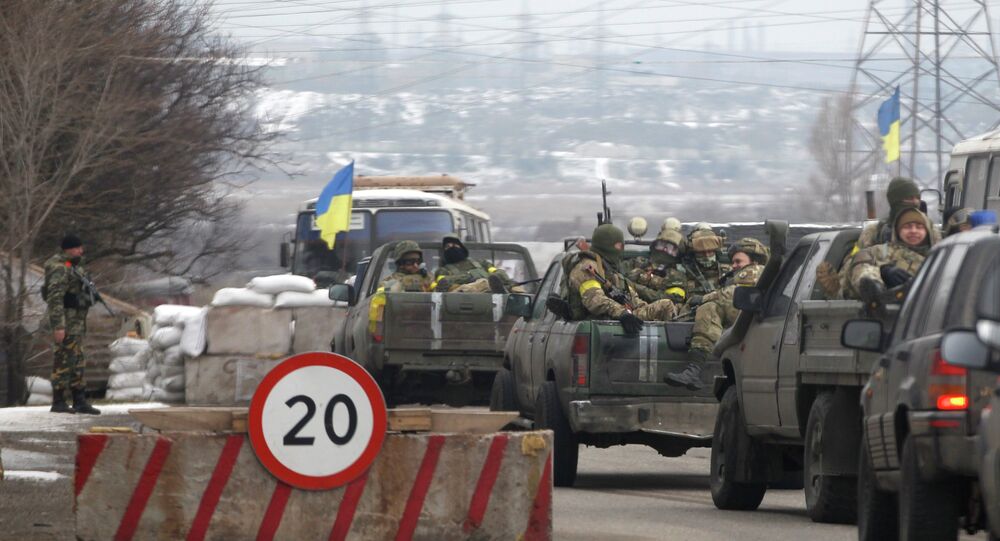 The Ukraine Problem: Another Cold War?

Shakespeare wrote: "Those whom the Gods wish to destroy they first drive mad." If such be the case, then our Western societies are in trouble.

As a Westerner who has spent much of his life in foreign affairs I have seen close up much of distortion and falsehood committed in the name of our allegedly superior Western values. I also have seen a lot of stupidity; in October 1964, for example, I was sitting at a Kremlin green baize table with an ignorant Australian foreign minister who was trying to convince Soviet premier Alexei Kosygin and foreign minister Andrei Gromyko that Moscow should join the West to help defeat an alleged Chinese invasion in Vietnam. But never have I seen anything quite as blatantly dishonest, and stupid, as current Western policies over the Ukraine problem.

From the very start it was clear that the Russian speakers in eastern and southeastern Ukraine simply wanted the same kind of autonomy that we in the West take for granted as a right for significant cultural groups in our own countries. Yet somehow Moscow's very justified support for these people under attack is being used in the West as an excuse for yet another anti-Russian Cold War.

© Sputnik / Nikolay Lazarenko
US to Deploy Six National Guard Companies to Ukraine This Week
I first visited eastern Ukraine in the sixties. Driving from Moscow to Crimea one had no sense of having left Russia to pass through a different republic called Ukraine. Indeed, some of us used to joke the only reason the area had been included in Ukraine was to pretend Ukraine was a large nation that deserved its own separate vote in the United Nations. But what we are seeing today is no joke.

In the years since the break up of the Soviet Union the Russian speakers in eastern and south-eastern Ukraine have had to suffer notoriously corrupt government, a standard of living so debased that their young women seek refuge in the bars and streets of Western Europe, and then the final indignity – an attempt to ban use of Russian language by a somewhat illegitimate government in Kiev dominated by Russian-hating ultra-nationalists.

Yet for some extraordinary reason the Western powers have decided that any demand for autonomy by Ukraine's Russian-speaking population is totally unacceptable. Meanwhile the Scots in Great Britain, the Catalans in Spain, the French-speakers in Canada, the Slovaks of the former Czechoslovakia have for much less reason been able to assume the right to seek some form of autonomy, federation or even independence. Germany is divided into 16 separate states each enjoying semi-sovereignty. Even monocultural Australia and the US prefer to divide themselves into federal states as a way to provide better government.

EU officials I have talked to say that the difference with Ukraine is that the Russian speakers are using force to back their demands. And what did the breakaway republics in the former Yugoslavia supported by the EU use? Presents of flowers and chocolate to the Belgrade government? The West encouraged those breakups.

And when words were not enough they sent in guns and bombers.

The hypocrisy does not stop there. During the Kosovo and other recent disputes Western planners have invoked the principle of 'responsibility to protect' (R2P). It says outside intervention is permissable when central governments use overwhelming force to suppress discontented groups within their borders. Over Kosovo, for example, the principle was supposed to justify Western support for the ethnic Albanian forces there in their alleged struggle against alleged Serbian oppression and ethnic cleansing. In fact ethnic cleansing only began after the Albanian extremists took over. As for the so-called Serbian oppression,  the government in Belgrade had allowed ethnic Albanians to set up a kind of 'shadow' government,  with separate language, schools, hospitals, administration. If the Russian-speaking areas of Ukraine had had the same degree of autonomy I am sure there would no dispute there today.

But for the moment let's accept R2P as a worthy principle.  In that case a Moscow intervention to prevent the independence supporters in Ukraine from being crushed by Kiev would be more than justified. In fact,  Moscow's support for the rebels has been minimal, if any; certainly less that what the West provided the ethnic Albanian separatists in Kosovo. Imagine what would happen if today Moscow was sending in bombers to attack Kiev and destroy key Ukrainian factories and infrastructure, to force it to allow independence for eastern and south-eastern Ukraine? The screeches from the Western media would be heard around the world, for decades. The US hawks would be counting their nuclear weapons.

There is something very sick in the Western mentality when Russia is involved. Our Kremlin watchers tell us how Mr Putin's saying the breakup of the former Soviet Union breakup was a tragedy means he wants to create another Soviet Union, with Ukraine as his first target. Really? Well in that case the 'experts' should tell us why those close to President Putin told us from the start that he believed it was not in the Russian interest to allow Russian-speaking Ukraine to separate since if it stayed within Ukraine it could serve as a barrier to further NATO expansion. Mr Putin's concern over the Soviet breakup would almost certainly have been over the way the sudden collapse left large numbers of Russian speakers under the rule of unfriendly governments in the Baltic States, Georgia, Moldava and Ukraine with little or no protection for their legal, language and other rights.

Is that concern really some unacceptable breach of international morality? Or does the immorality lie in the Western attempts to use those problems to attack, encircle or otherwise weaken the nation which once saved the West from Nazi domination?

The fact is that the US and UK have now found a brand new way to expand power and territory. It goes like this: First find a discontented group in a target country; if it is not already discontented start a propaganda campaign to make it discontented. Provide it with the arms and training needed to launch a rebellion against the government. When that government moves to counter the rebellion tell the world the rebels are being cruelly persecuted and under R2P it is your responsibility to help them gain independence. Then provide whatever military aid is needed to force that government to back down (bombing essential infrastructure is very useful here). When it does back down then, hey presto, you have gained a new client state, and maybe bases from which you can plan your next move, as in the former Yugoslaiva.

Alernatively, as in Ukraine, you join with a weak, incompetent  government trying to suppress a justified uprising. That way, if you succeed, you can also gain a client state and maybe some bases too. Either way it is an easy way to convince yourself and others that you are a saviour for the world's oppressed. It is also an ugly scenario for eventual world domination.