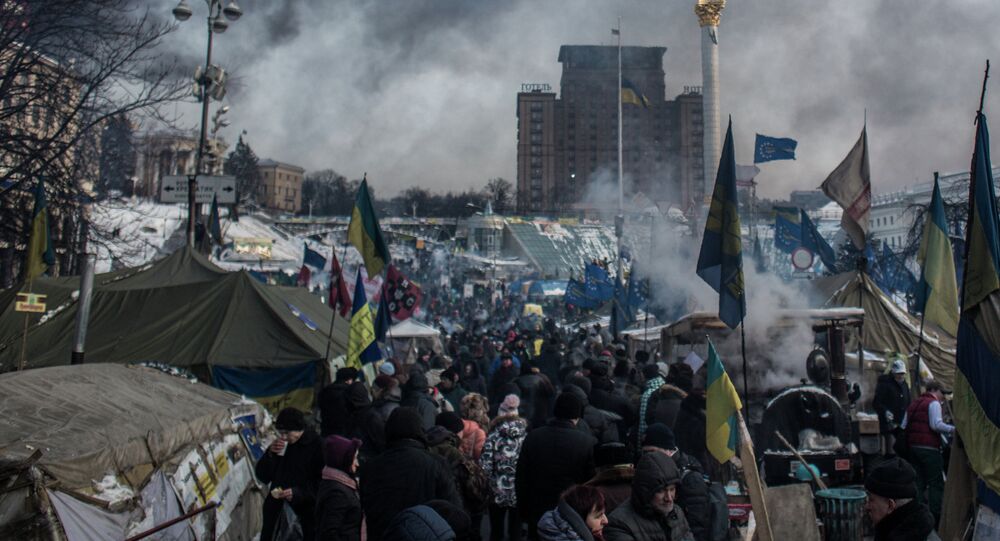 Sputnik revisits EuroMaidan, exploring the events that led up to the pro-Western coup and the aftereffect that this has had on the rest of Ukraine.

EuroMaidan finally succeeded in its months-long coup attempt one year ago, illegally installing a pro-Western government in power at the expense of Ukraine’s democratic processes. Looking at the event in hindsight and analyzing its consequences, one can obverse a continuum of destabilization that just won’t go away. In fact, the main variables destabilizing the country during EuroMaidan are still doing so today, except that they have even more Western backing than they did beforeand might eventually result in the complete dissolution of the Ukrainian state.

Prelude to the Coup

There were many things that were going on in Ukraine prior to the coup, but here are three of the most noteworthy:

© Sputnik / Evgeny Kotenko
Looking Back at Euromaidan: Who Benefits From Ukraine's Economic Collapse
In essence, the entire EuroMaidan movement was a rebranded form of Color Revolution that adapted its tactics to Web 2.0. Social media and the nexus between it and its conventional counterpart formed the backbone behind EuroMaidan’smainstream marketing, and the cunning utilization of this hybrid information warfare created a lot of sympathy for the cause. Unlike previous Color Revolutions, however, EuroMaidan was violent almost immediately from the start, and soon surpassed all of its forerunners in the carnage it caused.

Most of the violence associated with EuroMaidan came from Ukraine’s extreme right-wing elements that became empowered amid the breakdown of law and order that the Color Revolution ushered in. This was obviously facilitated by John McCain publicly meeting with Oleh Tyahnybok, the leader of Svoboda, a well-known neo-Nazi party. Direct ideological descendants of the Nazi occupation of Ukraine thus exploited this photo-op of American support to exorbitantly expand their membership rosters, steal the spotlight in lethally leading the coup forward, and accordingly seat themselves in comfortable positions of power after their overthrow succeeded.

Civil War in the West:

© Sputnik / Evgeny Kotenko
Bonfire of Illusions: Rally in Kiev on Maidan Anniversary
8
What most observers have conveniently forgotten is that Western Ukraine was literally up in arms and on the verge of civil war in the final days leading up to the coup. Newsweek magazine published a piece on 20 February, 2014 called “Ukraine: Heading For Civil War”, whereby it documented how ‘protesters’ violently overthrew regional governments in the west of the country and proudly proclaimed that “what's clear is that much of the country has become ungovernable. Even the capital remains in the hands of the rebels.”

International Business Times, in its 19 February, 2014 article “Ukraine Facing Civil War: Lviv Declares Independence from Yanukovich Rule”, shows that parts of the country were actually going as far as seceding from Ukraine. All the while, these actions carried with them the implicit support of the West, which conveniently forgot its pro-independence leanings when Crimea, Donetsk, and Luhansk decided to follow the exact same path in the aftermath of the successful coup.

Civil War In The East:

Not content with living under an authority that was illegally imposed upon them and threatening to rescind their Russian language rights (seen as a first step towards a larger right-wing-inspired pogrom against the Russian minority), the citizens of Donetsk and Luhansk took steps to exercise their right to self-determination amid the state’s legal collapse. However, the imposed pro-Western government in Kiev was not content with seeing its eastern citizens do the exact same thing against them that its western counterparts wanted to against the democratically elected Yanukovych government, and the subsequent civil war killed over 5,000 people and created hundreds of thousands of refugees.

As was mentioned previously, the coup catapulted certain extreme right-wing elements into the heights of power in Ukraine, such as Andriy Parubiy, who went on to serve as the Secretary of the National Security and Defense Council of Ukraine until August 2014. Not only was a right-wing extremist guiding Kiev’s forces during this long period of Ukraine’s Civil War, but some radical right-wing militias such as the infamous Right Sector were formally integrated into the new ‘National Guard’ that was created after the coup. Not only that, but many more neo-Nazi elements such as the Aidar and Azov Battalions fought informally on the side of the central government. It’s with scant surprise then that the civil war has turned out to be so bloody, and amidst all of this, there are still some voices in the West that refuse to recognize the existence of any right-wing forces in Ukraine.

So Much For ‘European Values’:

The irony of EuroMaidan is that while it was preaching the need for Ukraine to embrace ‘European values’ like the ‘freedom of speech’ and ‘democracy’ (both of which were incidentally already present in Ukraine under Yanukovych), when its conspirators seized power, they rapidly went about revoking these same rights. As but one of the countless examples that can be culled, Russian and suspected ‘pro-Russian’ media in Ukraine is practically all but censored within the state, thus depriving millions of people of their freedom to information and enforcing a harsh suppression on the freedom of speech.

© AP Photo / Sergei Chuzavkov
US General Outlines Plans to Train Ukrainian National Guard
Another example that most comes to mind is the draft that has been recently enacted within Ukraine for men between the ages of 18-60, with draft dodgers (of which there are already reportedly thousands) facing up to five years in prison. During the Vietnam War, Americans celebrated those who evaded the draft as having the courage to face jail for protesting an unjust war, but nowadays, many of those same Americans are hypocritically decrying Ukrainian draft dodgers as ‘abandoning’ their country and ‘selling out’ to the ‘enemy’. It must also be mentioned that in modern-day Ukraine, speaking out against the draft can also get one arrested on charges of ‘high treason’, as journalist Ruslan Kotsaba shockingly found out.

Accordingly, the future for Ukraine looks bleak, and it’s difficult to make a positive forecast about where the country is headed. Being realistic and assessing the situation with a sober mind, the three succeeding scenarios appear most probable:

The extreme right-wing elements are unhappy with Poroshenko’s agreement to the Minsk-II accords, and many have stated that they will continue the civil war with or without government support. As the chocolate king keeps losing more of his militarily pivotal right-wing base, it becomes ever more likely that they may conspire their own coup (perhaps another EuroMaidan) to overthrow the government and take power directly into their own hands.

One year after Euromaidan. What do you think about last year’s revolutionary events in Ukraine?
Voted: 3
All polls
It doesn’t seem likely that Minsk-II will hold the tenuous peace for long, and if it fails, then civil war will restart in the east. At the same time, however, the situation in Ukrainian Bessarabia has been simmering for nearly a year, especially after the Odesa Massacre of 2 May, 2014, where pro-government supporters burned dozens of anti-Maidan protesters alive in the city’s Trade Unions House. If a western front centered on Odesa were to be concurrently opened up during the recommencement of civil war in the east, then the state of Ukraine would likely collapse in the same fashion as Yugoslavia did two decades before it.

If there’s one thing that’s all but certain, it’s that Ukrainians can expect their rights to continue being rolled back amid the thunderous applause of Kiev’s new Western ‘partners’. Since the country is the front-line state in the asymmetrical War on Russia, it’ll be able to get away with any suppression of rights that it wants, and the number of political prisoners in the country will only continue to grow. The irony though is that the more that Kiev keeps violating the rights of its citizens, the more motivated the people of Ukrainian Bessarabia become in resisting the government, so these autocratic moves may have the unintentional effect of creating a pro-democracy liberation movement like that in the east, which could then spell the final end of pro-Western domination over the rest of the country’s political minorities.