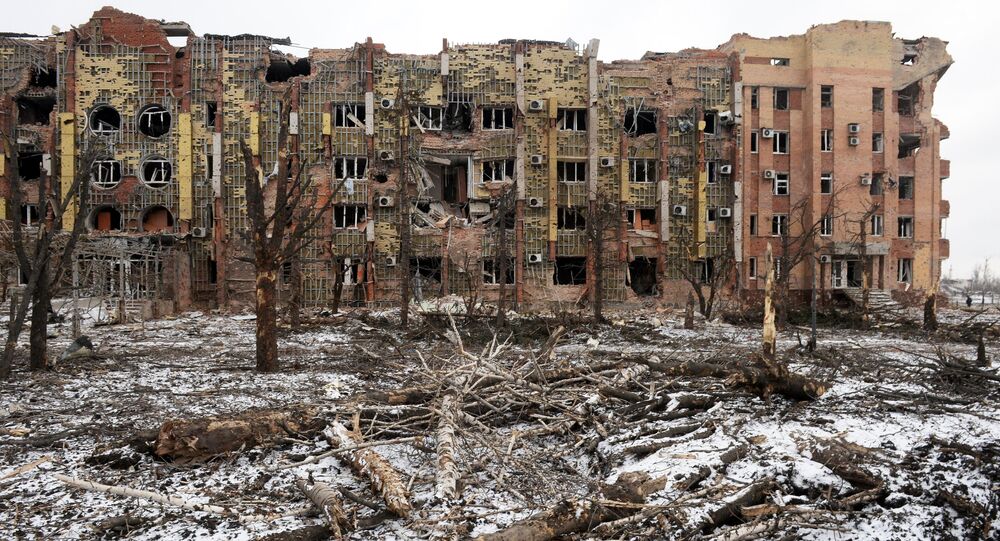 The Ukrainian government released an amateurish report supposedly showing all the damage that Russia has caused in the country. The thing is, it wasn’t Moscow that ruined East Ukraine, but Kiev.

© Photo : Taken from YouTube
Peace in Ukraine? Poroshenko Ally Predicts NATO Airstrikes Soon
Danylo Lubkivsky, Ukraine’s Deputy Foreign Minister, presented the so-called “Kremlin’s Black Book” prepared by the “Information and Communication Department”, which apparently was created to highlight all the destruction that Russia has supposedly brought to Eastern Ukraine. While putting aside the stereotypical and unsubstantiated ‘blame Russia’ narrative, the document surprisingly might be the most comprehensive assessment yet of all the damage the country’s civil war has done to the East’s infrastructure and the overall economy of Ukraine. In this manner, the whole thing can be seen as a major backfiring for Kiev’s “information and communication” objectives, since it has inadvertently implicated itself by collecting and publishing all the data about the extent of its crimes.

Before looking at the meticulous data that Kiev unintentionally collected about its own crimes, it’s necessary to address some of the amateurish aspects of its report. For starters, it comes off as overly desperate in trying to get one to believe the anti-Russian narrative that it’s pushing.

Unlike the ‘big boys’ of information manipulation that at least address some of the more popularly known but ‘inconvenient’ realities before dismissing them away, Kiev doesn’t even try. To the Ukrainian government, such untimely facts as the East’s large-scale popular uprising against the coup authorities and its subsequent battle for autonomy don’t exist, nor do Pravy Sektor and other extreme neo-Nazi elements that motivated the residents’ fears in the first place.

According to them, everything is the fault of Russia and its “terrorists”, including the MH-17 tragedy, although no authority in the world besides Kiev says that Russia supports terrorists or was responsible for the plane crash. Although Kiev does have some supporters in the West who say that Russia has ‘invaded’ and ‘occupied’ Ukraine, not a single shred of incontestable proof has even been procured to support this fantasy, and those that ascribe to this myth also typically reject the actual proof of entrenched and indigenous resistance to Kiev. Combine these obvious informational shortcomings with the report’s childish red and black color scheme (a despairing attempt to ‘scare’ the reader), and the entire thing comes off as overly amateurish and too eager to push a one-sided agenda.

Having moved past the anti-Russian falsehoods presented in the report, it’s now possible to get down to the nitty gritty of how bad Kiev’s war in the East has hurt Ukraine’s economy. The document states that 20% of the country’s economic potential has been destroyed, which has resulted in a 124% inflation index for 2014. Ukraine’s foreign exchange reserves decreased by three times and its sovereign debt is up by 88.4%. Industrial output fell by 10.7% and there were 10.1% less goods being transported throughout the country, showing that trade has indeed suffered. Altogether, these facts and more show why the country has been urgently begging for an enormous $40 billion loan from the IMF, which Kiev’s creditors have been reluctant to fully provide to the corrupt and warmongering authorities.

In between the lines, however, one can see a different, albeit completely unintended, narrative emerging. When the false accusations of Russian complicity are swept aside, it’s clear that all of this macroeconomic devastation is Kiev’s own fault, and that it’s affecting both the rebellious east and the pro-government west. It’s not the supposed ‘Russian troops’ in the east that are directly harming the west’s coffers, but the Kievan forces that are obsessed with continuing the conflict at all costs, including economic. Instead of pragmatically realizing that no government can ever succeed in subduing a people that don’t want to be ruled by it and cutting their losses in advance, Kiev has opted to continue exercising the use of force out of its own nationalist and ideological desires, with all of the resultant negative consequences for the rest of Ukraine.

The real value in Kiev’s document is the damage assessment it provides for Donetsk and Luhansk, with a specific focus on residential and energy infrastructure. It represents perhaps the first time that such a comprehensive survey like this has been carried out by the Ukrainian government or any pro-Western source, and amazingly, it can actually be read as a compilation of Kiev’s war crimes (which obviously wasn’t the intent). Here’s what it entails:

The report documents that 489 residential buildings in Luhansk and 9,215 in Donetsk (12% of the total there) were destroyed or severely damaged by the beginning of February 2015.

Think about it — if what Kiev asserts about a ‘Russian invasion’ is true, why would Russia destroy the homes of so many of the same people that it intends to conquer and annex? Wouldn’t that breed immediate resistance to the ‘occupation’ and spawn World War II-like partisan groups that would fight to the literal death for their liberation?

That doesn’t make much sense, does it? But now consider this scenario – a nationalist government carries out reprisal attacks against the majority-minority population in two rebellious provinces, with the intent of punishing them for their resistance and de-facto actualizing an ethnic cleansing by forcing many of them to flee to the neighboring state for their safety. Which is more plausible?

Just as ridiculous as it is that Kiev wants people to believe that “Russia” would bomb the homes of the people it hopes to one day ‘occupy’, they also want the world to think that it would do the same to the energy infrastructure in those territories, too. According to the report, 239 gas distribution pipelines in Luhansk and 2,772 in Donetsk were either severely damaged or destroyed by “Russia”, which would mean that the energy giant is masochistic enough to purposely harm its own economy (which the West inaccurately characterizes as ‘energy-centric’) in order to somehow spite Ukraine.

Even if that whopper of a lie were true, wouldn’t the ‘evil Russia’ just go all out and cut off all the gas to Ukraine or go about and destroy every pipeline to Europe while it’s on the rampage?

Of course that’s not at all what happened, but the truth of the matter is actually scarier. The document quite correctly notes that 9,360 consumers (both private houses and apartment buildings) in Luhansk and 43,300 in Donetsk were affected by this sabotage, and that this led to unbridled catastrophe in the latter, with 117,000 people deprived of power and 515,000 with no water. Interestingly, this humungous humanitarian crisis was largely skimmed over by the Western media, with only RT and other Russian sources consistently reporting on it since it happened. So why has the West been silent on this tragedy? Well, because Kiev is the one who destroyed the pipelines in the first place and created the humanitarian crisis, with all of its ethnic cleansing implications. When a pro-Western military commits such crimes and the rest of the world ignores them, that’s a lot worse than a phantom Russian ‘invasion’ that never happened.

A Silly Blunder or Back to the Future? CNN Annexes Ukraine to Russia

Ukraine is a 'Soup We Should Not Stir' — Romanian Ex-President