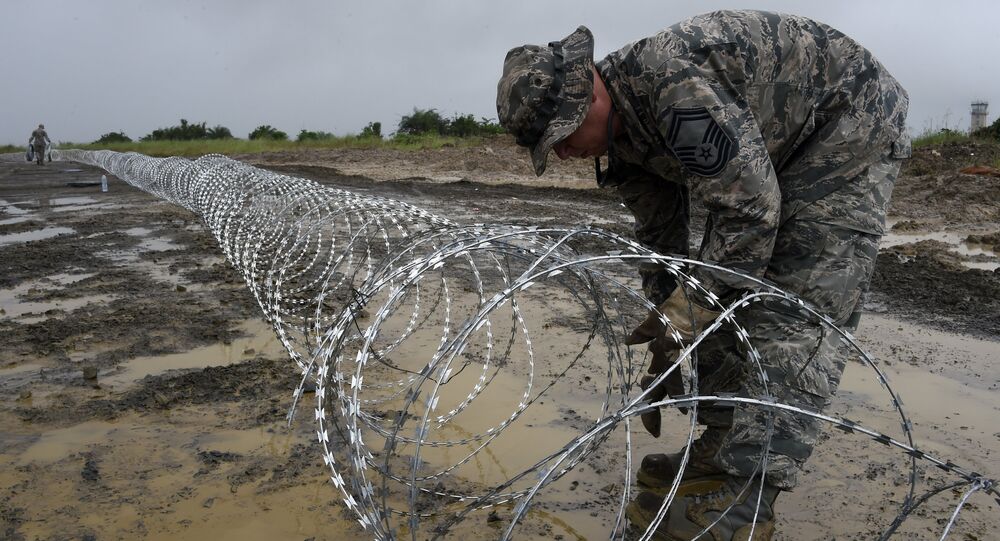 The only reason behind the US military presence in West Africa is the geopolitical game America is playing. The US is competing with China for African resources and markets, not because America needs them (any gains are bonuses for it), but because China does in order to keep growing.

© AP Photo / LM Otero
Ebola Scare? Army Soldier Found Dead After Returning from West Africa
The US plans to withdraw all but 100 of its soldiers stationed in West Africa, but this doesn’t mean that America is retreating from the region.

President Obama announced that thousands of American troops deployed to West Africa will be leaving the region by the end of April. While many are arguing over whether this constitutes a ‘victory’ in the ‘war on Ebola’ or not, they’re largely missing the point. The fact remains that America’s military footprint in the region opened the door to an over 10,000-strong civilian component of influence projection there, with the ultimate aim of preventing China’s economic engagement of the area. In fact, when West Africa rebuilds after Ebola is finally dealt with, it will be Western, and not Chinese, companies and contractors that will take part in this bonanza. Unnecessarily militarizing a medical crisis was just a means to achieving this end.

So here’s a quick riddle for you: What’s transnational, has killed thousands, and the US sent thousands of its troops to fight? If you guessed ISIL, you’d be wrong, since the US hasn’t (yet) put boots on the ground to fight it. The answer is Ebola, and the US has militarized its rhetoric and actions around the virus even more than it has for ISIL.

It started innocently enough, with the media talking about a ‘war’ against Ebola in the same fashion that there’s a war on drugs. But, drug traffickers carry weapons and murder people, Ebola patients do not. Then CNN started quoting soldiers who said that “there’s no better fight worth fighting than the one in Liberia right now”. Before anyone knew it, thousands of troops were ordered into the West Africa to participate in this phantom fight. Guns don’t kill viruses – doctors, medicine, and sanitation do – but the US kept militarizing this ‘fight’ without explaining why it helps any.

© Flickr / warrenski
China's Plans to Develop Transport in Africa Driven by Economic Interests
Why Was The US Military In West Africa Anyway?

Well, some suspect that it had to do with oil off the coast, but that’s not too probable. There’s definitely some oil there, but is it enough, and does the US need it so badly, that it’s going to spend all that time, money, and resources to get? That’s not too likely, considering that almost half of America’s consumption comes from the Western Hemisphere, and that, as they say, “there’s bigger fish to fry”, if it came to that.

No, what’s more plausible is that it’s a geopolitical game at influencing the continent. The US is competing with China for African resources and markets, not because America needs them (any gains are bonuses for it), but because China does in order to keep growing. Sending a couple thousand troops opened the door to an extended full spectrum presence and a possibly wider regional footprint. Also, once Ebola is eradicated, those countries’ economies will have to recover somehow, and instead of the Chinese moving in, the US would rather send its own contractors and companies, or those of its allies.

From Military To Non-Military Means Of Influence

This brings us to the unreported reality of what’s being left behind in West Africa. UN coordinator David Nabarro said that there are currently 10,000 American civilians left in the region and that he “hope[s] that they will continue to be engaged and to provide cash and material and elements until the thing is finished.” This demonstrates that American influence in the region has made the jump from military to non-military manifestations, which, in the general scheme of things, is actually more efficient for the US.

The miniscule 100 remaining troops, as reported, will help protect them, work with Liberia’s military (the strongest of the three Ebola-affected countries and the state with the most direct historical ties to the US), and cooperate with regional partners. Essentially, they’re a water-downed version of hard influence that will be buttressed by the massive amount of civilian soft power left behind in the region. Once the virus is totally dealt with, the civilian component can then set up a pro-American ‘civil society’ and associated NGOs to make sure that China is never able to penetrate those countries with its influence, in what is but a small regional step in America’s larger pan-African plan for power.