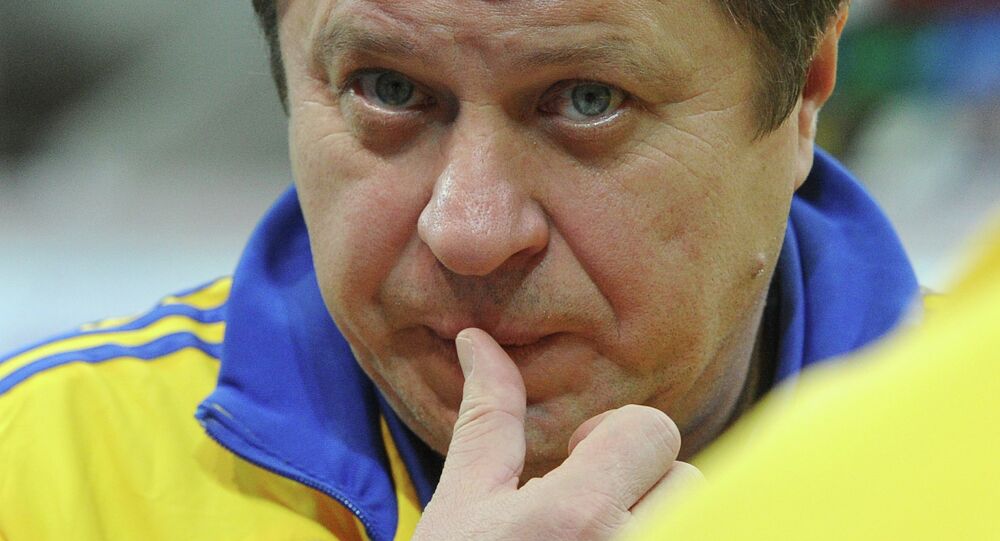 Ukrainian Soccer Legends Receive Call to Arms – Against Their Will

Legendary former players and now coaches for Ukraine’s national team, have received orders from the Ukrainian defense ministry to report to the army’s drafting stations.

The civil war in Ukraine is knocking at the door of the nation’s most respected citizens – the coaches of its national soccer team. Alexander Zavarov (53) and Yuri Sivukha (57), both of them legendary former players and now coaches for Ukraine’s national team, have received orders from the Ukrainian defense ministry to report to the army’s commissariats. (In Ukraine, commissariats are drafting stations, from where, after a brief interview, men from 18 to 65 years of age can be dispatched straight to the frontline.) The total number of these orders for the Soccer Federation of Ukraine (SFU) is 89: all kinds of people, from simple clerks to world-famous players, have been called upon to fill the ranks of the currently embattled Ukrainian army.

The problem is not just in the age of the new draftees. The mobilization announced by President Poroshenko targets all men aged between 18 and 65, so at the age of 53 or 57 one is still considered quite fit for cannon fodder. “There are no deferments for anybody,” explained the head of Ukraine’s General Staff, Vladimir Talalay.

© REUTERS / Alexander Ermochenko
Ukraine Recruits 45,000 Draftees in First Nine Days of Mobilization
The real problem for the new regime in Kiev is that both Alexander Zavarov and Yuri Sivukha are from the Russian-speaking east of Ukraine, where the Ukrainian army is now conducting its “anti-terrorist operation” with the use of heavy weapons and aviation. Zavarov is from the now rebel-held Luhansk (the capital of the unrecognized Luhansk People’s Republic). Sivukha is from the nearby city of Kharkov, which in the early years of the Soviet Union was the super-loyal capital of Soviet Ukraine and where numerous pro-Russian rallies have been held in the months following the anti-Russian “Euromaidan” of February 2014.

Zavarov was blunt about his refusal to participate in Ukraine’s civil war: “I will never wage war in the city, where my family and my children live and where my parents are buried,” Zavarov said in comments quoted by Internet resource Vesti Ukrainy. “Please, make it known to all of your readers: I just want peace.”

The scandal over the “call to arms” of the two aging stars of Ukrainian football is quickly snowballing in Ukraine. For decades, the famous team Dynamo (Kiev) and the national soccer team that stemmed from it after the collapse of the Soviet Union in 1991 were the main focus of Ukraine’s national pride. And one of the main attractions of these soccer teams were their famous coaches. The legendary coach of Kiev’s Dynamo, Valery Lobanovsky, even had a monument erected to him in the center of Kiev after his death in 2002. (Symbolically, this monument was damaged during the recent revolution.)

© Sputnik / Sergey Averin
Kiev Using Compulsory Mobilization, Donetsk Recruiting Volunteers
So, what will happen to these coaches now? Shall Mr. Zavarov go to jail for dodging the draft, as the law requires? Zavarov is the first assistant to the national team’s chief coach Mikhail Fomenko, who refused to comment on this embarrassing situation. “Now only Fomenko can save Zavarov and Sivukha,” Vesti Ukrainy wrote in their headline.

Besides Zavarov and Sivukha, Ukraine’s Soccer Federation became the launching pad for a number of famous players, now known throughout Europe: Alexey Mikhailichenko, Andrei Shevchenko, etc. Many of these soccer players have not yet reached the age of 65. Will they also be called up and sent to war? And what happens if they refuse? Besides jails, there is such a thing in modern Ukraine as the pressure of the government-sponsored public opinion. For example, the Ukrainian government is openly supporting “spontaneous protest actions” against pop singers whom it considers are not patriotic enough. Street protests often disrupt the concerts in Ukraine of Any Lorak, a Ukrainian pop singer working mostly in Russia. These “protests of activists” were openly touted by the Ukrainian mainstream media. Will the ball-pushing “refuseniks” share the same fate?