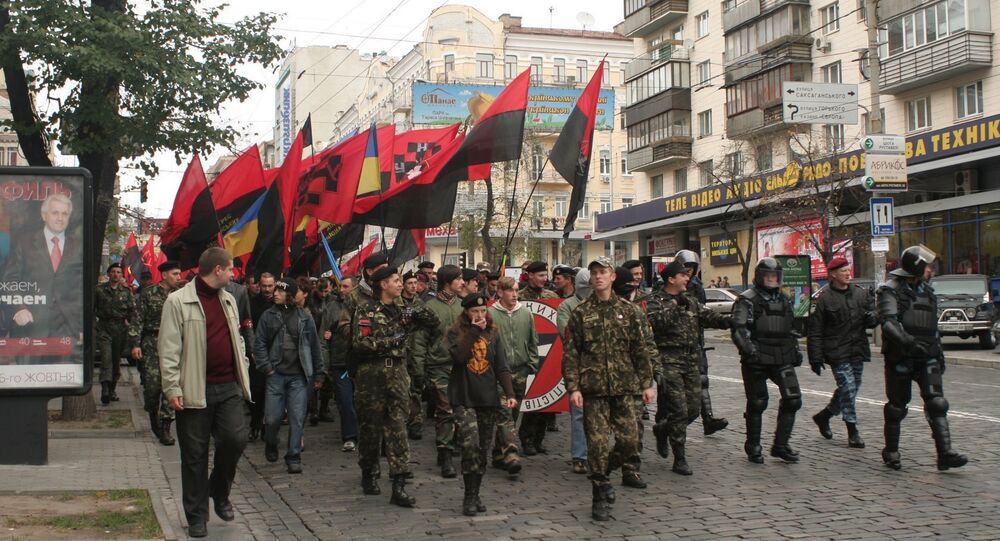 If past experience serves as any indication, the former Euromaidan protesters who run what's left of Ukraine will break the latest Minsk agreement, just as they broke the previous ones. When they do, they will suffer another defeat, causing more losses of territory and population.

© REUTERS / Gleb Garanich
Obama's 'Big Lie': US Has Supplied Ukraine With Arms From the Start
The ceasefire agreement that emerged from the Minsk negotiations is being overanalyzed. The underlying story of the Ukrainian conflict is being lost.

The Ukrainian conflict is the product of a militant political movement that is unable to compromise with its opponents.

There have been many agreements between the Euromaidan movement's followers in Kiev and its political opponents. The members of the movement have broken every one. The political violence in Ukraine began on November 30, 2013 when the original Euromaidan protesters reneged on an agreement to vacate Maidan Nezalezhnosti (Independence Square), leading to clashes between the protesters and riot police.

In the period leading up to the February coup, this worked in the protesters' favor. Every agreement made and broken with the former government made them stronger while sapping the government’s authority. The result was an agreement on February 21, 2014 which would have given the protesters power over the whole of Ukraine, including Crimea.

Even though the protesters got everything they wanted, they broke that agreement too, seizing power the following day in an armed coup.

Since then, the dynamic has gone into reverse.

Whereas the February 21, 2014 agreement would have given the Euromaidan protesters power over the whole of Ukraine, including Crimea, by breaking the agreement, they provoked Crimea to secede and triggered anti-Maidan protests in the east of the country.

During the course of the subsequent conflict, the new government made more agreements but has broken them all. The result, however, this time is that the terms of each new agreement become harsher for Kiev, so its position becomes weaker.

© REUTERS / Michael Dalder
For Those Who Want to Arm Kiev, Ukraine’s Defeat is Better Than US Retreat
On April 17, 2014, the new government signed a four-power statement in Geneva that required it to launch an inclusive national dialogue with its opponents to agree upon a new constitution. Kiev broke the agreement and launched a war to crush them instead.

Kiev was defeated in the war.

On September 5, 2014 Ukraine was forced in Minsk to recognize the resistance in the Donbas by passing a law on its special status, pending constitutional negotiations that would have granted Donbas substantial autonomy within Ukraine.

Kiev broke that agreement as well. It rescinded the law on special status. It imposed an economic blockade of the Donbas. It reinforced and reequipped its army. In January 2015 it attacked the Donbas again.

Once again, Kiev was defeated.

The result is that on February 12, 2015 Ukraine was forced to agree in Minsk to lift the economic blockade of the Donbas, to grant the law on special status by the end of March and to agree upon constitutional reform with its opponents by December 2015. Pending that agreement, Ukraine has been forced to cede control of Ukraine’s border with Russia to its opponents and Russia.

If past experience serves as any indication, the former Euromaidan protesters who run what's left of Ukraine will break the February 12, 2015 agreement, just as they broke the agreements of February 21, 2014, April 17, 2014 and September 5, 2014. When they do, they will suffer another defeat, causing more losses of territory and population. The terms of the next agreement they will be forced to accept will be harsher still. Beyond a certain point, this dynamic will make their position untenable, putting the current regime's existence at risk.

That is what happens when a political movement plays for all or nothing. It risks ending up with nothing.