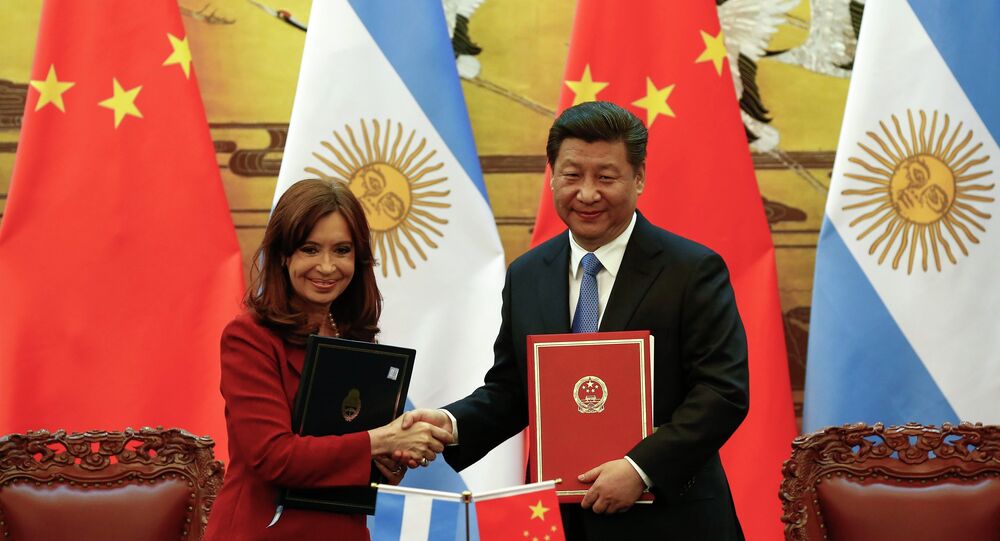 China’s enormous investments in Latin America appear to be paying off, as the country now commands influence all throughout the hemisphere. Its new role in the region could portend an American pushback, however, as Washington becomes more defensive over its traditional backyard.

Argentine President Cristina Fernandez de Kirchner’s recent visit to Beijing demonstrated that it is China, not the US, which holds the most sway in South America. The struggling Latin American giant, still one of the largest economies in the hemisphere, has lately been attacked and forced into its eighth default by what Kirchner terms as ‘vulture funds’, which she blames on “economic terrorism” and the US. In response to her country’s woes, she sought out Chinese assistance to weather the asymmetrical storm, and Beijing has been more than willing to provide it. This is because Argentina is one of the primary cogs in China’s hemispheric policy, which aspires to advance geopolitical multipolarity in the region by means of strategic partnerships with Venezuela and Nicaragua. The US doesn’t play nice in any kind of rivalry, let alone one so close to its home borders, so it’s anticipated that it will soon pull out all the stops in pushing back against these developments.

© Sputnik / Sergey Guneev
China Plans to Invest Extra $250Mln in Latin America Over Coming Decade
Amid the troubling economic storm that Kirchner accuses the US of having cooked up, Argentina has looked to solidify its strategic partnership with China. First agreed to only last summer during President Xi Jinping’s Latin American tour, the partnership was christened with $7 billion worth of deals in the rail, hydropower, shipbuilding, and other industries. Not only that, but China, Argentina’s second-largest trading partner nowadays, agreed to an $11 billion currency swap at the time, thus showing not only its belief in the country’s long-term economic viability, but also its commitment to helping its economy stabilize on the eve what was then seen as the imminent New York court decision. Kirchner’s current trip yielded 15 more agreements intended to enhance the strategic partnership, with the most notable being for China to help Argentina construct two nuclear power plants.

Altogether, China sees Argentina as an economic bastion with enormous long-term potential, provided it can successfully fend off the current American attacks against its financial system. Chinese support for the country can thus be seen as a direct challenge to the US’ attempts at economic destabilization there.

Nicaragua and Venezuela are no less important to China’s hemispheric policy than Argentina is, although they fulfill drastically different roles than latter’s financial one. Nicaragua functions as China’s trade and transportation ‘bridge’ which will link together the Pacific and Atlantic (through the Caribbean) via the Trans-Oceanic Canal that Chinese capital is helping to construct. Once completed, it’ll be able to accommodate ships much larger than the Panama Canal’s maximum, and it’s expected to open the door to a multipolar surge of influence in the Caribbean, right on the US’ back doorstep.

As for Venezuela, the country has taken on the role of the ideological leader against American hegemony, with former President Chavez having taken on the torch from the retired Fidel Castro. Of course, gigantic oil deposits helped make this ideological ‘changing of the guard’ possible, but as a result, Venezuela is the leader of the ALBA coalition of regional multipolar states.

This grouping links together Cuba, Nicaragua, Bolivia, Ecuador, and a few smaller island countries, showing that Venezuela has become an important node in hemispheric diplomacy which China wants to tap. Just last month, Venezuela President Nicolas Maduro visited Beijing and received promises of $20 billion in investment to help counteract his country’s difficulties from the steep drop in oil revenue, which have contributed to yet another Color Revolution attempt at regime change.

Looked at as part of a unified strategy, China’s inroads with Argentina, Nicaragua, and Venezuela form a sort of Latin American strategic triad, with each state representing financial, transportation, and soft power influence for Beijing, respectively. The US keenly understands the processes that are developing, hence why it’s gearing up for a massive pushback to regain its hegemonic edge and reverse the regional trend to multipolarity. Whether or not it’s successful, here’s how it intends to do so:

The US cannot stand the fact that Kirchner has so successfully set her people on the path to multipolarity since entering office in 2007. Argentina was invited to the BRICS meeting in Brazil last summer for the first time, showing how warmly it’s been embraced by the multipolar community. In response, the US will likely step up its economic war against Argentina in order to crash its economy around election time in October, use a Color Revolution to bring a Liberal-Westernizer to power, and consequently entrap the country with IMF and World Bank loans.

In an almost exact repeat of the CIA’s Cold War-era Contra operation in Nicaragua, the US can arm rural villagers against President Ortega, but this time it would be those who are distraught at having to sell their properties along the canal’s proposed route. The Daily Beast even wrote in November that some villagers were already begging for weapons so that they can start fighting immediately, showing that this scenario is certainly plausible. If Nicaragua erupts in guerrilla warfare, construction on the canal would halt, and if Ortega can be overthrown, then his probable pro-Western replacement would likely scuttle the entire project.

The repeated Color Revolution attempts in Venezuela and the currency war ongoing against it are symptomatic of the US’ vehemence that Maduro must go. Chavez’s successor and the leader of Latin American multipolarity is envisioned by American strategists to be replaced with Henrique Caprilies and/or Leopoldo Lopez, both of which have actively agitated to overthrow the government. Expect the Color Revolution furor to intensify down the line, but also for Maduro and his supporters’ resistance to do so as well while they fight to the end for the Bolivarian Republic.

The new US-Cuban push to restore diplomatic relations is fraught with astounding strategic risk for Havana, since the US may transform it into an economic satellite and/or infiltrate it with professional Color Revolutionaries, both of which would make the country’s leadership dependent on Washington’s future dictates. If Cuba, the revolutionary poster child of anti-hegemony, can be neutralized, then the chain reaction may continue all throughout the rest of the ALBA network, which might be the extra push that the US needs to ruin China’s multipolar cooperation with Nicaragua and Venezuela and overthrow their governments. With those two out of the game, the US can then concentrate the rest of its attention on Argentina, which would likely follow in their demise.