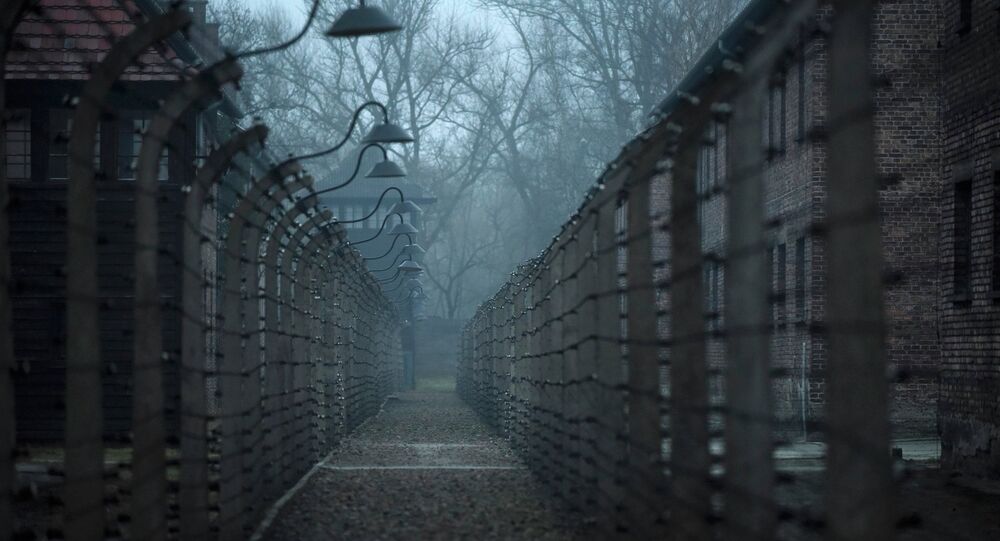 The statement by the Polish foreign minister, Grzegorz Schetyna, that Nazi Germany's infamous Auschwitz concentration camp (located near the Polish town of Oswiencym) was liberated by “Ukrainians” has unleashed a real storm in Russia.

© East News / Jan Graczynski
Russia Upset at Polish Attempts to Rewrite Auschwitz History
MOSCOW, January 22 (Sputnik) — The Soviet Union always prided itself for putting an end to the Nazi atrocities in Poland and other countries of Eastern Europe, and Russia shares this pride.

The Polish side is already trying to play down the incident, which came hot on the heels of the “non-invitation” of Russian President Vladimir Putin to the celebrations of the 70th anniversary of Auschwitz’s liberation in January 2015.

But even if the words of Schetyna were just a slip of the tongue, there is a much bigger problem looming behind them, namely, the attempts by Poland, the Baltic countries and (in the last few years) even by Germany to deny the role of Russians in the defeat of Nazi Germany. It is precisely this context that made Russians reaction so emotionally (the Russian foreign ministry made a special statement on the matter, while the Russian media and Internet exploded with indignant comments).

Let’s suppose the Polish minister just wanted to stress the role which Ukrainians played in the Soviet army or was misled by the name of the group of Soviet armies which liberated Poland. (This group of armies was called The First Ukrainian Front, and Schetyna mentioned that.) First, this would not make Schetyna look like a great expert on World War II. The name of the First Ukrainian Front was connected to the area it was supposed to liberate, not to the ethnic origin of its soldiers, which included just about all the ethnic groups of the former Soviet Union, with ethnic Russians constituting the clear majority.

Second, the attempt to deny the role of Russians in the liberation of the victims of Auschwitz fits a larger agenda – according to which the Soviet soldiers are proclaimed to be no better than German Nazis. Just one day before Schetyna’s statement, the Polish authorities refused to commemorate the 70th anniversary of the liberation of Warsaw (January 17, 1945, when German Nazis finally gave up Warsaw to the advancing Soviet Army). The huge cemetery of Soviet soldiers in central Warsaw became the final resting place of 21,830 Soviet soldiers. They were all killed during this operation, which the Polish authorities now refuse to call liberation from the Nazis, preferring instead to refer to “Soviet troops entering an empty city” or even to “the second occupation” of Warsaw by the new “occupiers from the East.”

“It is sad that Polish historians are now teaching their people a different history.”

“I was lucky – in Poland I met living witnesses of the liberation of Warsaw by the Soviet army,” writes in the daily Rossyiskaya Gazeta Ariadna Rokossowska, a prominent Russian expert on Poland and the great granddaughter of Soviet Marshal Konstantin Rokossowski, who headed the liberation of Warsaw.  “These people were weeping from joy when the Soviet soldiers entered the city and met them with flowers – as their liberators… It is sad that Polish historians are now teaching their people a different history.”

In Krakow, the second most populous city in Poland, which the Soviet troops liberated without the use of artillery (a difficult choice which saved the city’s beautiful medieval architecture), there were no official celebrations at all.

© REUTERS / Pawel Ulatowski
Russia is Set to Attend Holocaust Memorial Event in Auschwitz
The soldiers who are buried at the Warsaw cemetery did not take part in the Stalinist repressions against Polish nationalists. In fact, first the Soviet Union under Gorbachev and later Russia under presidents Yeltsin and Putin apologized to Poland for the repressions that were conducted by the Soviet secret police – from the execution of captive Polish officers in the Soviet Union in 1940 to the repressions against the underground Polish “National Army” in the late 1940s and early 1950s. Even the liberal (and extremely anti-Russian) Polish newspaper Gazeta Wyborcza admits that the Soviet Union saved Poland from a much more cruel repression than the one Poland had to endure under the communist government.

“During the course of five years of occupation, the Germans killed several million Polish citizens; they totally destroyed the country, shutting down universities and high schools. The German Plan Ost presupposed the physical liquidation of educated Poles, the conversion of the rest of the population into manual laborers and even a resettlement of Poles to the vicinity of the Ural Mountains. Meanwhile, the pro-Soviet Polish People’s Republic, during its 40 years in power, killed just 30 thousand persons and most of them in the immediate aftermath of the war. How can these two very different sins be even compared?”

One has to agree with Ariadna Rokossowska: Poland's foreign minister, Grzegorz Schetyna, doesn't speak for the entire country. Lots of regular Poles are now writing indignant Internet comments or “letters to the editor” – with little chance of ever being published. Meanwhile, the opinion of a “man from the street” in Poland is often more objective than the view of the mainstream media sources, with their anti-Russian prejudices and strong pressure from the companies which own and control them (which in Poland happen to be mostly German). Here is one such letter, sent to the Sputnik International by one of our readers from Warsaw, a pensioner, Wojciech Domoslawski.

“Don’t these Polish authors understand that without the heroes of Stalingrad, there might simply not have been anyone to liberate in Poland?”

“In the post-1989 Poland, there is a fog of forgetting around all names connected to the liberation of Poland and the battles in Russia, especially Stalingrad, which made our liberation possible,” Domoslawski writes. “I lived near the Square of  Heroes of Stalingrad, but soon after 1989, the plaque with this name of our square disappeared. And now some Polish authors are teaching us that these heroes of Stalingrad – these are our enemies who just happened never to have reached Warsaw. Don’t these Polish authors understand that without the heroes of Stalingrad, there might simply not have been anyone to liberate in Poland?”

© AP Photo / Markus Schreiber
Yatsenyuk Rewrites History: ‘USSR Invaded Germany’
Negative reactions from Russia are not seen by the Polish elite as a push to engage in more self-analysis. Instead, a quick instrumentalization of history for pseudo-patriotic aims is under way. From this distorted, radical, black-and-white history emerges the distorted policies of today.

The former hero of the Polish anti-communist underground Solidarity movement, Zbigniew Bujak, now a political pundit, in an interview with the radio station RMF FM, said it would be “fantastic,” if Polish soldiers “were already fighting in Donbass (the name of the rebellious area in the east of Ukraine).”

Why? Because together with the Ukrainian army, these soldiers would be fighting “our common mortal enemy – Russia.” When asked about a possible Russian retaliation, Bujak noted: “It is Russia’s problem how it would interpret this.” By the way, “this,” in Bujak’s language, is the sending of a joint Polish-Ukrainian-Lithuanian battalion to Donbass.

The gap between awful lies and awful actions may be disturbingly narrow. We have not yet become accustomed to awful lies about the “two occupations” of Poland, but we are already hearing CALLS for awful actions – sending Poles to fight in Donbass.