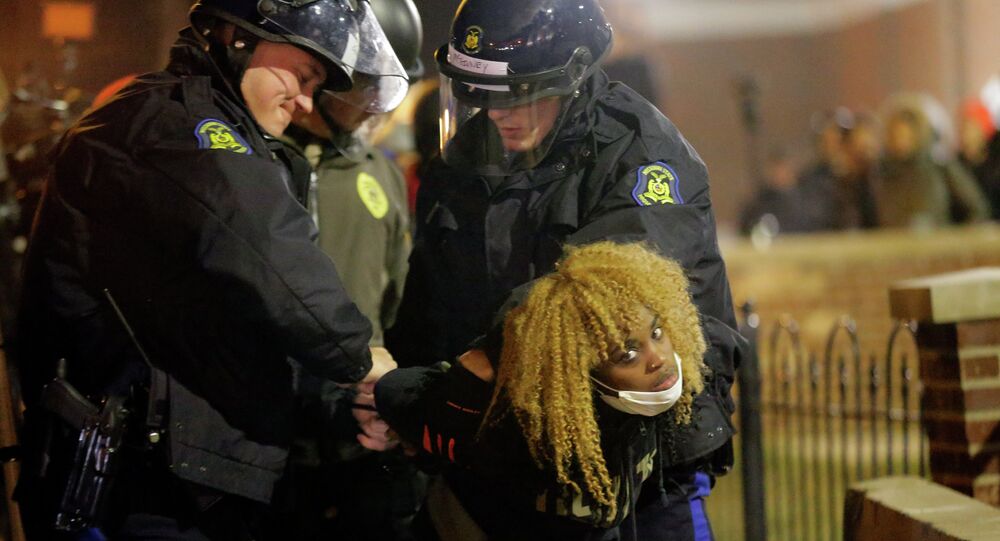 The US justice system is no longer concerned with justice, but with the careers of prosecutors, punishing the powerless, and protecting the powerful. As justice has largely departed the justice system, it is hardly surprising that police lack any concept of justice.

© AP Photo / Charlie Riedel
Ferguson: Safety of Citizens is Lost With Unaccountability of Police
ATLANTA, November 29 (Sputnik) —  Few, if any, of the correct questions were asked in the grand jury hearing to decide whether policeman Darren Wilson would be indicted for killing Michael Brown.

The most important unexamined question is whether police are trained to use force immediately as a first resort before they assess a situation or determine if they are at the correct address. Are the police trained that the lives of police officers are so much more valuable than the lives of possible suspects, or a houseful of people into whose residence a heavily armed SWAT team enters, that police officers must not accept the risk of judicious behavior when encountering citizens? If this is the case as all evidence indicates that it is, then the police when they gratuitously murder members of the public are merely doing what they have been trained to do. As police are trained to use violence as a first resort, the police cannot be held accountable when they do.

There are a large number of videos available online that show that the first thing that police do when they arrive is to use force.

No sooner is Michael Brown in the grave than Cleveland cops kill a 12-year old boy who has a toy gun that shoots plastic pellets. The child is threatening no one--indeed there is no one else present. The boy seems to be playing a fantasy game in his head. A busy body calls the police. The police arrive and instantly shoot the kid down.

© REUTERS / Adrees Latif
North Korea Says Ferguson Protests Expose True Human Rights Situation in US
Here is a selection of videos and reports. Some of the videos are compressed to save the viewer time. They range from 59 seconds to the full 7:51 minute video, which shows the kid is just walking up and down the sidewalk. All the action comes at the end. The police arrive and instantly open fire, making no effort whatsoever to assess the situation.

Just a few days before Michael Brown is killed, Ohio police murdered John Crawford inside a Walmart store. What had Crawford done?  He had picked up a BB rifle from a Walmart shelf and was on the phone with the mother of his two children, perhaps checking with her whether he could purchase it for the kids. A busy body named Ronald Ritchie felt threatened and called the police. The police rush in and shoot Crawford. The police claim that they ordered Crawford to drop the rifle, but the video shows the police shooting Crawford on sight. The busy body Ritchie actually caused two deaths, as the incident of Crawford’s murder caused Angela Williams to die from a heart attack as she fled the store in response to the police gunfire.

Yes, you guessed it. The grand jury decided the police were justified.

Here is another video that demonstrates that policemen shoot instantly without cause. This is a rare case in which the policeman was held accountable, most likely because the video prevented authorities from fabricating the usual story of police justification.

© AP Photo / John Minchillo
Ferguson Protesters Raise Awareness at New York Thanksgiving Parade
In this video, police shoot down an unarmed black man in the street. After shooting Kajieme Powell ten times, the cops hold guns on the dead body while they handcuff a dead man. Like an almost endless number of other such videos, this one shows that either psychopaths are recruited for the police force, or police training turns cops into psychopaths.

The problem with the grand jury and prosecutor in Ferguson and everywhere else is that the real problem--the training of police to use deadly force as a first resort--was not identified as the cause of Michael Brown’s death.

© Fotobank.ru/Getty Images / Chip Somodevilla
Online Activists Protest Black Friday Sales Spree Over Ferguson Ruling
The Ferguson grand jury’s decision is not an exoneration of Wilson’s use of deadly force. Anyone familiar with the American criminal justice (sic) system knows that any prosecutor can get or prevent an indictment from a grand jury. Prosecutors are allowed to determine what evidence is presented. Prosecutors are permitted to bribe witnesses with money or dropped charges, and they can coerce false witness testimony by threatening a witness with charges. Seldom does an indictment or refusal to indict turn on the true facts.

The US justice system is no longer concerned with justice, but with the careers of prosecutors, punishing the powerless, and protecting the powerful.  As justice has largely departed the justice system, it is hardly surprising that police lack any concept of justice.

National Guard Troops Called in to Contain Chaos in Ferguson