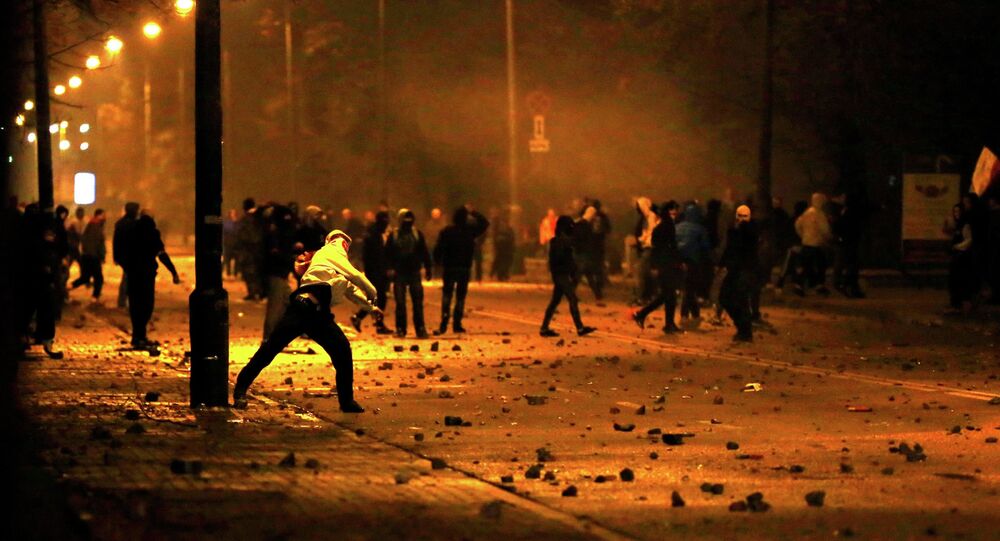 Rioting in Warsaw: Many Hate the EU and Everyone Blames Russia

In November 2013 – February 2014, Warsaw showed official support for the violent actions of the “urban guerillas” on Maidan. However, Poland’s politicians are somewhat reluctant to let the participants of much less violent riots out of jail in their own capital.

MOSCOW, November 12 (RIA Novosti) — The recent riots in Poland’s capital Warsaw, where 200 people were arrested and several dozen were wounded, are not being compared in the mainstream Western press with the violent clashes of the so-called Maidan revolution in neighboring Ukraine. The Polish rioters are being presented as mere “hooligans”. However, the tactics and slogans of the so-called “peaceful protesters” in Kiev and Warsaw are very similar. In November 2013 – February 2014, Warsaw officially gave its 100 percent support to the violent actions of the “urban guerillas” on Maidan and blasted former president Viktor Yanukovich for arresting the perpetrators. Oddly enough, Poland’s politicians are somewhat reluctant to let the participants of much less violent riots out of jail in their own capital.

Even the obnoxious jokes of the participants in the two “protests” were similar. Last winter in Kiev, the rioters warmed themselves up by jumping and chanting “If you don’t jump, you’re a Russian!” In Warsaw, as the daily Gazeta Wyborcza reported, the “independence fans” were chanting “If you don’t jump, you’re a queer!” Racism and hatred for minorities were quite visible in both Kiev and Warsaw, but the mainstream press of both Poland and the EU in general preferred to overlook them during the “pro-European” Maidan riots.

In fact, the Independence Day riots in Poland revealed what a lot of Poles see as the REAL danger to their independence.  It isn’t Russia, which the Polish mainstream press tries to demonize, but rather the EU. That was clear from the speech of Juliusz Dzerzawski, one of the march’s organizers, an alternative candidate for the position of mayor of Warsaw from the People’s Movement party. Here is what Dzerzawski had to say about Poland’s former prime minister Donald Tusk, who, thanks to his anti-Russian stance during 2014, was promoted to the position of the president of the European Council (replacing Herman van Rompuy): “The man who did more than anyone else for Poland’s subjugation to Brussels – this man has got a sinecure in Brussels. He is now getting 12 thousand zlotys a month. For him, it was a nice deal, for Poland it wasn’t!” Dzerzawski said, addressing the crowd of 40 thousand people.

What happened in Warsaw was a mixture of many Polish social phenomena, which the Western press prefers to keep quiet about. There was a Maidan-inspired element, there was crude Polish nationalism, but there was also frustration with the destructive subjugation of the Polish economy to European bureaucracy.

It is no coincidence that the anti-EU People’s Movement, which was one of the main organizers of the march and which was born out of the Independence March of 2012, is one of the fastest growing parties in Poland, appealing to both young and old people. Janusz Korwin-Mikke, the 72-year-old leader of the Union of Real Politics (one of the factions of the People’s Movement) was elected to the European Parliament as a MEP representing Poland. Korwin-Mikke’s success was the greatest sensation of this election and his anti-EU stance even led to some alarmist articles in the EU press (Korwin-Mikke accuses the EU’s leaders of having a totalitarian mentality and speaks out against the aggressive introduction of “gender politics” in Poland).

In a sense, Poland repeated the hypocritical mistakes the United Kingdom made in 2011, when British politicians praised the “Twitter revolution” in Egypt – only to see similar Twitter-organized riots in London in August 2011. When the looters were arrested in London, a lot of them said they did not understand why the British government is punishing them for something that it itself had praised in Egypt.

Quite expectedly, Gazeta Wyborcza and other Polish mainstream media outlets found a “trace of Moscow” behind the Polish riots. “Polish Ultra-Right Nationalism Is Held on a Leash by the Kremlin Imperialism,” read the headline in Gazeta Wyborcza.

The statement of the Russian foreign ministry, which denounced the events in Warsaw as a sign of “softness to aggressive nationalism,” – such statements are never taken literally by the mainstream Polish media. The trend of accusing Russia of everything will continue. As always, its consequence will be impunity for absurd anti-Russian statements and conspiracy theories (Zbigniew Girzynski, a Sejm legislator, just recently accused the Polish parliament of having a “pro-Putin majority,” and there are many similarly absurd examples). The second natural consequence stemming from this impunity will be the absence of reforms and lack of discussion on the main issue – Poland’s destructive dependence on the EU and the USA. After all, it is not Russia, but the EU which caps its member countries’ social spending.

Poland ‘Satisfied’ With US Decision to Sell 40 Missiles to Warsaw: Defense Minister