US President Trump is claiming that he phoned Saudi Crown Prince Mohammad bin Salman and arranged for him to call Russian President Vladimir Putin in an attempt to resolve the oil price war between Russia and Saudi Arabia. However, the Kremlin says this call never occurred. Whoops! 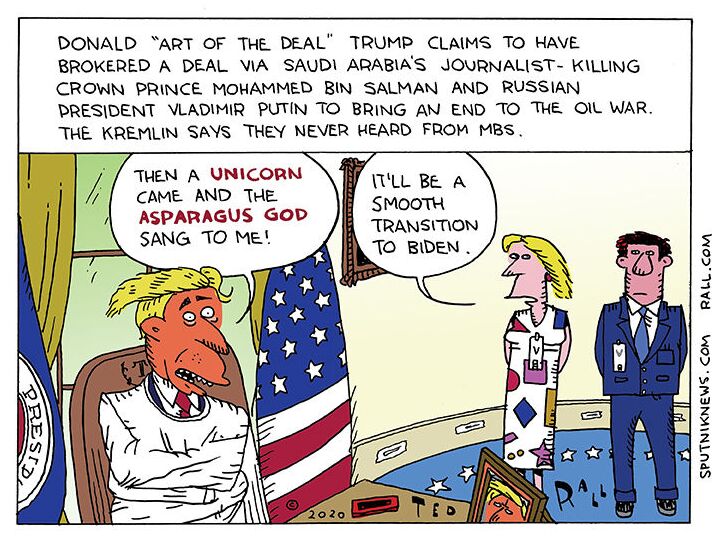 Self-proclaimed “Dealmaker” Trump boasted on Twitter Thursday that he “just spoke to my friend,” the Saudi prince, who in turn spoke with Putin about their oil issues. “I expect & hope that they will be cutting back approximately 10 million barrels, and maybe substantially more which, if it happens, will be GREAT for the oil & gas industry!” Trump said.

However, Kremlin spokesperson Dmitry Peskov said soon after that evidence of this phone call is about as invisible as Trump thinks the F-35 stealth fighter is.

Interestingly enough, when asked about Saudi Arabia and Russia during Wednesday’s White House press briefing, Trump said that he "knows what to do to solve [the oil dispute]" if Russia and Saudi Arabia are unable to come to an agreement.

During the presser, Trump stated that Russia and Saudi Arabia “are going at it,” saying, “So I spoke to President Putin about that. I also spoke to the Crown Prince about that.” He went on to say that “the two countries are discussing it. And I am joining, at the appropriate time, if need be. We had a great talk with President Putin. We had a great talk with the Crown Prince.”

Hopefully he doesn’t imagine any COVID-19 medical supply calls next.

The War on Error