The Nevada Democratic presidential debate in Las Vegas, Nevada, Wednesday night had been highly anticipated, and the tension and histrionics surely delivered, to say the least. 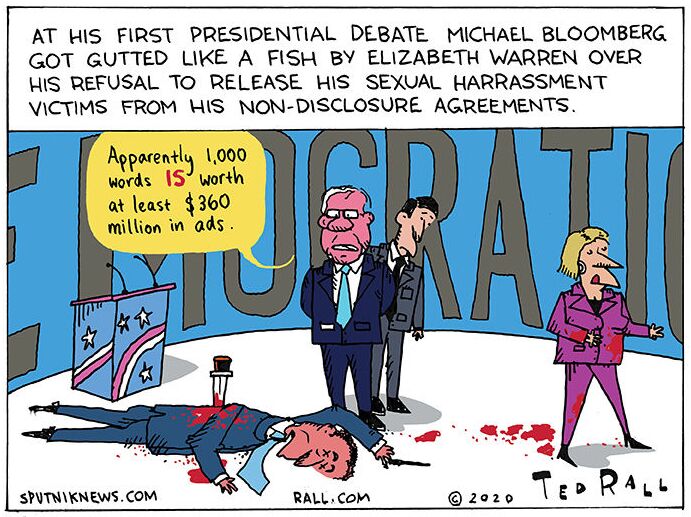 The potential Democratic nominee to faceoff with incumbent Republican US President Donald Trump has quickly been narrowing, with candidates who have been on the campaign trail for months steadily dropping out due to fundraising roadblocks or failure to gain enough support to qualify for the crucial debates.

Mike Bloomberg, the former mayor of New York City, was fresh meat on the stage. As soon as the debate began, candidates brutalized the former official of the Big Apple and self-made billionaire businessman. Bloomberg, who joined the race only a few months ago, qualified for the debate in the polls after his last-minute entry - and after an unprecedented ad spending spree for the race: an estimated $400 million thus far, according to Kantar Media.

During the contentious debate that further threatened to muddy the party’s imperative quest to defeat Trump in the upcoming election, the well-seasoned candidates who remained offered no mercy whatsoever to the newcomer.

Here's that early Warren haymaker. "I'd like to talk about who we're running against, a billionaire who calls women fat broads and horse faced lesbians. I'm not talking about Donald Trump. I'm talking about Mayor Bloomberg." pic.twitter.com/AS9XVbTthz

Sen. Elizabeth Warren (D-MA) had quite a bone to pick with Bloomberg over his alleged history of sexist remarks, pressing the businessman and former NYC mayor to “release” the women that night from nondisclosure agreements they made with his company, as well as asking how many women had signed such deals. Bloomberg, explaining that the agreements resulted from his female employees being “offended” by jokes that he told, promptly declined, saying that the nondisclosure agreements were “consensual.”

Bloomberg declines to release the women from agreements. pic.twitter.com/YoPGnQI0vJ

With Democratic “friends” like these, who needs Republican enemies?

Fault Lines Grow Deeper Among Dems Ahead of Nevada Debate