When word of protests in Puerto Rico reached the desk of US President Donald Trump, 45 took it upon himself to fan the flames of calls for Governor Ricardo A. Rosselló to resign by repeating erroneous claims about federal aid to the US territory. 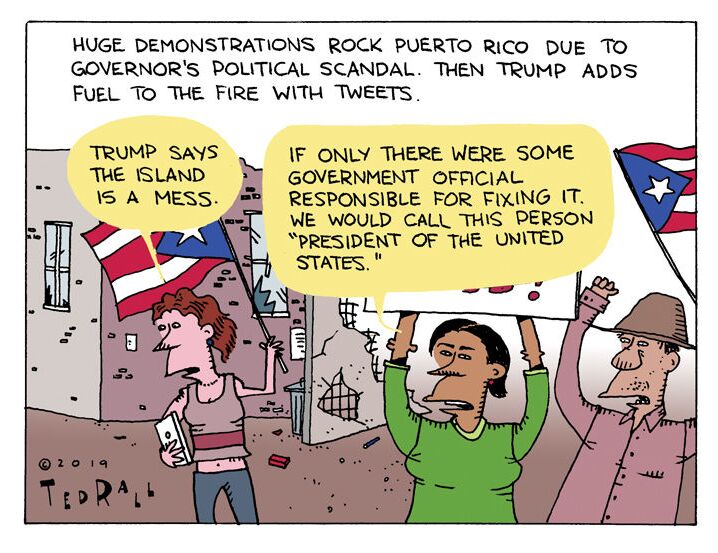 Saturday, some 900 pages of messages from a Telegram chat between Rosselló and other Puerto Rican bigwigs were leaked, showing the officials insulting other public figures such as singer Ricky Martin and San Juan Mayor Carmen Yulín Cruz. Since the reveal, a series of protests calling for Rosselló’s resignation have been organized around the island.

Perhaps to take some of the national heat off himself for his own recent insults hurled toward four US congresswomen, Trump took to Twitter and gave his two cents on Puerto Rico.

....of which was squandered away or wasted, never to be seen again. This is more than twice the amount given to Texas & Florida combined. I know the people of Puerto Rico well, and they are great. But much of their leadership is corrupt, & robbing the U.S. Government blind!

Trump’s claim that the US territory received $92 billion in federal aid after Hurricane Maria has been consistently debunked, as the FEMA website provides up-to-date records of the money allocated to disaster relief. The actual number stands at $42.5 billion, less than half of Trump’s claimed total.

Arizona Rep. Ruben Gallego has even called the president out on this claim, saying that $91 billion is the estimated total of aid money that will be distributed to Puerto Rico over the next 20 years.

However, with Rosselló once threatening to metaphorically punch Trump’s administration in the mouth and Cruz telling 45 that he is “incapable of empathy and frankly simply cannot get the job done” in 2017, it would appear he views their loss as his gain.