US President Donald Trump and North Korean leader Kim Jong Un are gearing up for the second US-North Korea summit on February 27 and 28, but despite the hype, skepticism remains of how the two leaders will resolve issues regarding denuclearization and nuclear threats. 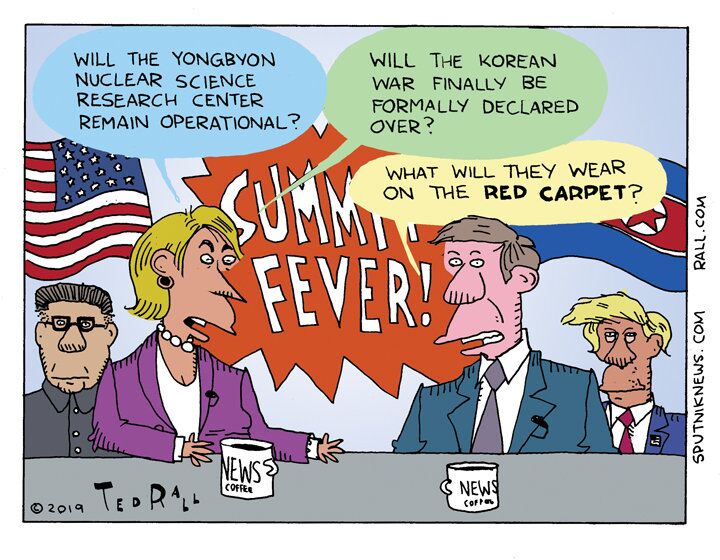 The world is watching Vietnam ahead of the second Trump-Kim summit taking place over the next two days, and everything from lookalikes to smoke breaks in Hanoi are making headlines.

Friday, Kim Jong-un impersonator Howard X, also known as "Kim Jong Um," turned heads and tricked countless individuals on and offline when he met up with Russell White, who posed as Trump, and discussed the details of their "meeting." As expected, the duo was detained following the stunt.

Kim and Trump lookalikes draw the crowds in Hanoi days before the second summit between Kim and Trump in Vietnam's capital#KimJongUn #Trump #Vietnam pic.twitter.com/Ca7WJu0Kgx

In real Kim Jong-un news, a February 26 video clip showing the leader taking a smoke break outside a Chinese train station has already amassed over 150,000 views. No word on the cigarette brand, unfortunately. Parliaments, perhaps?

Despite the hype and show surrounding the summit, issues such as denuclearization and potential threats of nuclear warfare are nearly as exciting.

Speaking to Sputnik's Loud and Clear, radio host Brian Becker noted that North Korea wants a guarantee that the US will not engage in future nuclear intimidation tactics, while Washington has its own goal: denuclearization.

"Denuclearization of the Korean Peninsula means a comprehensive denuclearization, and I think the summit, if it's going to be meaningful, will have to go forward in trying to give a definition of what that actually looks like," Becker added.