US President Donald Trump revealed in a Monday interview that he is “in the process” of overturning the 14th amendment of the US Constitution to revoke the extension of birthright citizenship to children born to immigrants in the US illegally. 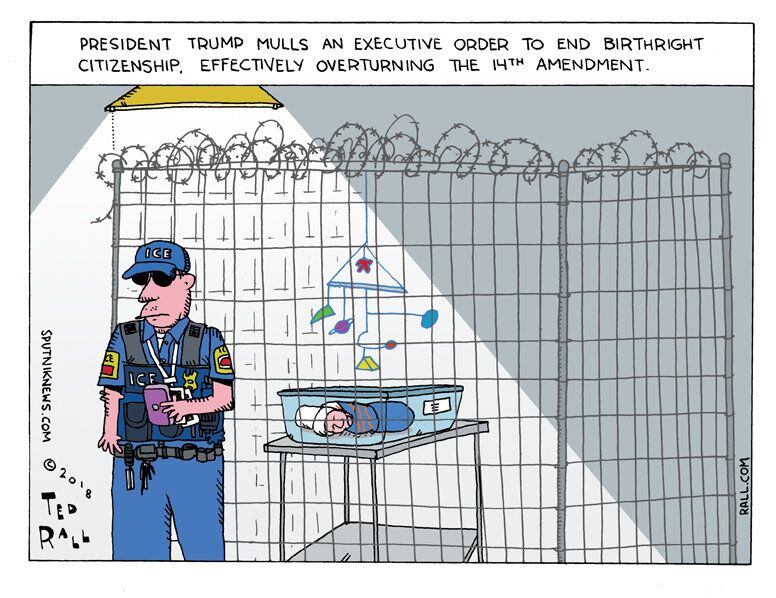 On Monday, US President Donald Trump's sit-down with Politico's Axios on HBO highlighted his thoughts on birthright citizenship and knowledge of his presidential power.

"We're the only country in the world where a person comes in, has a baby, and the baby is essentially a citizen of the United States for 85 years with all those benefits. It's ridiculous. It's ridiculous, and it has to end," explained Trump to Axios, moments before asserting an executive order was already in the works and "it'll happen" in the end.

Not only was Trump's hyperbole (or ignorance) on birthright laws around the world called out, but many, including Speaker of the House Paul Ryan, also felt the need to counter the president.

Speaking to Politico, Vice President Mike Pence, who usually assumes the role of Trump's translator, explained how he perceived the US president's comments — in light of heavy criticism pertaining to the legality of an executive order.

"What I think the president's made clear is that we are looking at action that would reconsider birthright citizenship," explained Pence, who also asserted that the revision would be specifically applied to "to people who are in the country illegally."

Trump's remarks come amid anticipation of both the November 6 midterm elections around the corner and the migrant caravan making its way slowly from Honduras toward the southern US border. The caravan, still very far from US territory, has become a major focus for Trump in recent weeks.