Through a unanimous vote Monday, the West Hollywood City Council approved a resolution to encourage Hollywood Chamber of Commerce to remove US President Donald Trump’s star from the Hollywood Walk of Fame. Whether actual changes will take place, however, is still undecided. 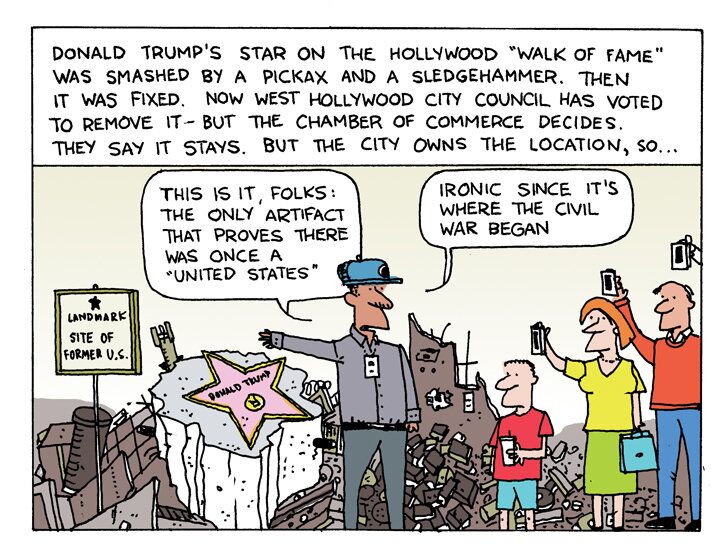 Since Trump was elected president, his star on the Hollywood Walk of Fame has been undergoing a supernova moment. From brawls and defacement to men dressed in Russian soldier attire, the star has been the centerpiece of many political protests against and in support of the American president.

Though the West Hollywood City Council's Monday vote will bring about a formal letter encouraging the star's removal to Los Angeles Mayor Eric Garcetti, the LA City Council and the Hollywood Chamber of Commerce, the latter in particular, are unlikely to budge.

"Once a star has been added to the Walk, it is considered a part of the historic fabric of the Hollywood Walk of Fame. Because of this, we have never removed a star from the Walk," said chamber president Leron Gubler in a statement, Sputnik reported.

While the fate of Trump's star is yet to come, one thing does remain true: the US president was awarded the star in 2007 for his work as a producer of the Miss Universe pageant. To clarify his contributions to the pageant, Trump revealed on "The Howard Stern Show" in 2005 some details of his day-to-day work on the pageant's set — which were later confirmed by former beauty queens.

"Before a show, I'll go backstage and everyone's getting dressed, and everything else, and you know, no men are anywhere, and I'm allowed to go in because I'm the owner of the pageant, and therefore I'm inspecting it," said the now-US president. "You know, I'm inspecting because I want to make sure that everything is good."