Kicking off the year with her January resignation/firing from the White House, Omarosa Manigault-Newman is now transitioning from the “Celebrity Big Brother” house to the publishing house with her third book: "Unhinged: An Insider's Account of the Trump White House.” 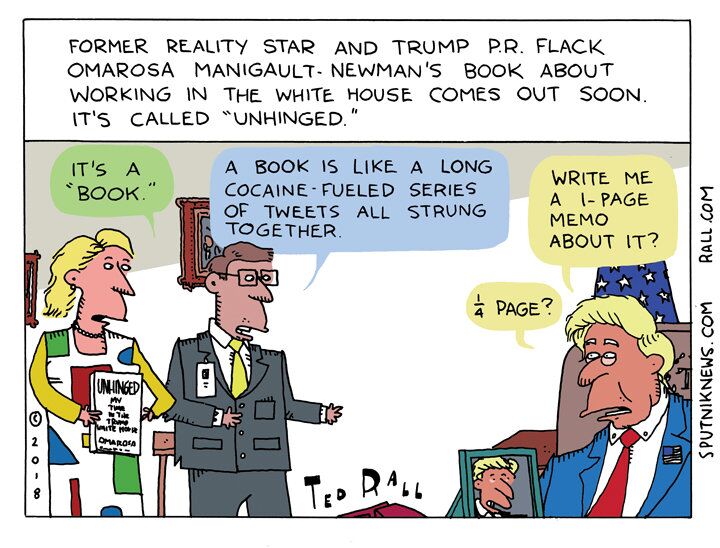 Very familiar with booking a gig, collecting a lump sum payment and catching the public's attention for the next opportunity, Omarosa will have to utilize everything in her "war chest" to take on the inevitable backlash from the White House following her memoir's August 14 release.

Simon & Schuster's Gallery Books, Omarosa's publisher, is already teasing the forthcoming tell-all as "jaw-dropping," and makes sure to highlight the former US official and reality star's 15-year relationship with Trump "through four television shows, a presidential campaign and a year by his side in the most chaotic, outrageous White House in history."

The US president may be drafting a few sharp tweets about Omarosa, considering the back-and-forth she received from the Trump administration during her time on CBS' inaugural season of "Celebrity Big Brother."

"Omarosa was fired three times on 'The Apprentice,' and this is the fourth time we let her go," remarked Deputy Press Secretary Raj Shah with a chuckle in February. Though Shah did not appear to give much credence to Omarosa or her position as director of communications for the Office of Public Liaison, which did not exist as a role prior to 2017, questions relating to her public statements did not let up earlier this year.

At the very least, perhaps daytime television viewers will receive another interview comparable to her 2008 appearance on Wendy Williams' talk show, in which she was promoting her first book, "The Bitch Switch."