Despite a lack of credible information pertaining to suspect Jarrod Ramos and his motive for allegedly carrying out the mass shooting at the offices of Maryland’s Capital Gazette, that didn’t stop Americans, from netizens to news hosts, from tying the incident to their own personal political agendas. 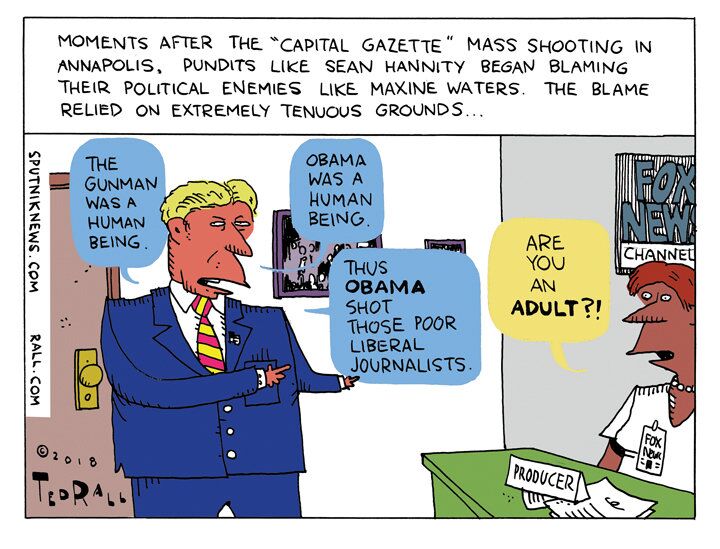 Of those quick on the draw to point the finger, Fox News host Sean Hannity was notably one of the swiftest Thursday following initial reports of the incident.

Before Christians could even get to their keyboards to tweet out thoughts and prayers, Hannity hopped on the airwaves to tell America who was actually to blame.

"You know, as I've always said, I mean honestly — I've been saying now for days that something horrible was going to happen because of the rhetoric. Really, Maxine?"

While Hannity appeared eerily giddy about finding a way to tack his words onto a tragedy, he also completely glossed over remarks US President Donald Trump made, specifically directed toward the "fake news" media, at his South Carolina rally Monday.

Unfortunately for both sides of the fence, each new piece of information relating to Ramos builds the case suggesting a personal vendetta against that specific newspaper.

Trump on Maryland Newspaper Shooting: Press Should Be Secured, Free of Fear

Vigil for Victims of Maryland Newspaper Shooting Set for Today