FLOTUS Flees to the Border

Thursday, First Lady Melania Trump made waves in both political and entertainment media by taking an unannounced visit to two separate Texas detention centers near the US-Mexico border. 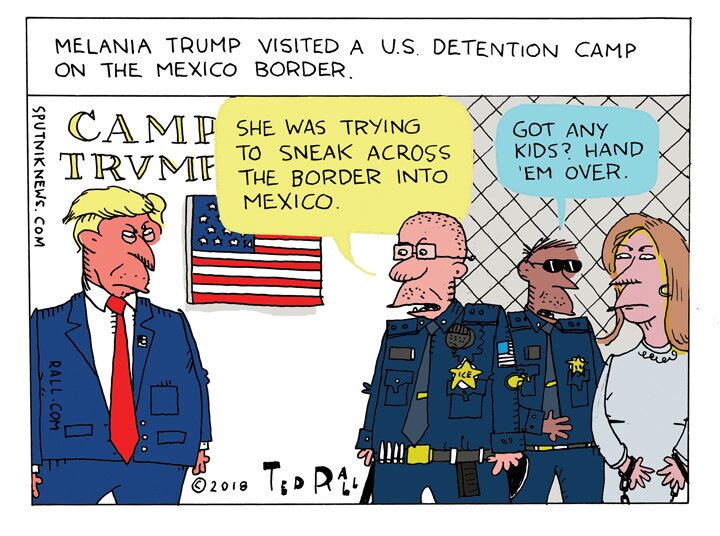 Less than 24 hours after US President Donald Trump signed an executive order to undo the "zero tolerance" policy that separated parents and children at the US-Mexico border, FLOTUS took to Andrews Air Force Base in Maryland to fly out to two detention centers in McAllen, Texas: Upbring New Hope Children's Shelter and another unnamed facility under the Department of Homeland Security.

Before Melania could get off the plane, social and news media were ablaze in response to her choice of pre-flight attire. FLOTUS' jacket, a $39 sold-out garment from Zara, greeted press photographers with the words "I REALLY DON'T CARE, DO YOU?" The Donald later clarified on Twitter that the words were directed at the "Fake News Media," but Melania's spokesperson doubled down, asserting it was "just a jacket." Though contradicting each other, both interpretations went against the idea of the coat's words referencing detained children.

"I would like to ask you how I can help to these children to reunite with their families as quickly as possible," Melania said during a brief roundtable event at Upbring New Hope Children's Shelter, which reportedly houses children between the ages of 12 through 17.

Despite 45 signing the executive order to cease the splitting up families at the border, over 2,000 children already separated from their parents and guardians currently remain in limbo with no clear sign of reunification to come.