Blame it on the Ambien

Actress, comedian and former US presidential candidate Roseanne Barr claims the prescription sedative Ambien was the true culprit behind her describing Valerie Jarrett, a former White House senior adviser, as a child of the “muslim brotherhood & planet of the apes.” 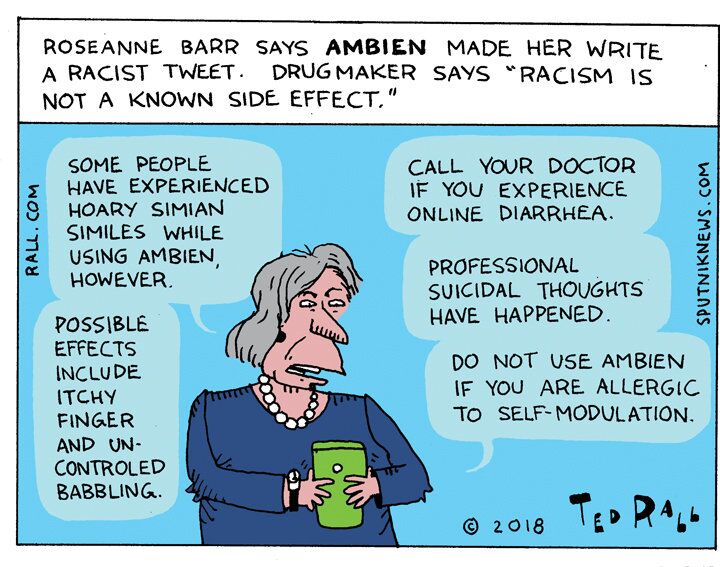 While some were debating whether Barr's tweet was likening Jarrett to apes or speaking from a place of Islamophobia, the former ABC star returned from her hours-long Twitter hiatus to proclaim in a now-deleted tweet that her 2 a.m. "Ambien tweeting" was "indefensible."

Not to be used as a scapegoat, Ambien maker Sanofi's US branch shot back at Barr without even mentioning her name.

People of all races, religions and nationalities work at Sanofi every day to improve the lives of people around the world. While all pharmaceutical treatments have side effects, racism is not a known side effect of any Sanofi medication.

Naturally, US President Donald Trump, who received vocal support from Barr during the 2016 presidential election, also joined in on the Roseanne cancellation "party" by calling out Bob Iger, CEO of Disney, which owns ABC.

Bob Iger of ABC called Valerie Jarrett to let her know that “ABC does not tolerate comments like those” made by Roseanne Barr. Gee, he never called President Donald J. Trump to apologize for the HORRIBLE statements made and said about me on ABC. Maybe I just didn’t get the call?

While the ultimate fate of the leading lady's show is unknown for the cast and crew, it seems certain that the actress is won't be backing away from the Twitter app anytime soon.