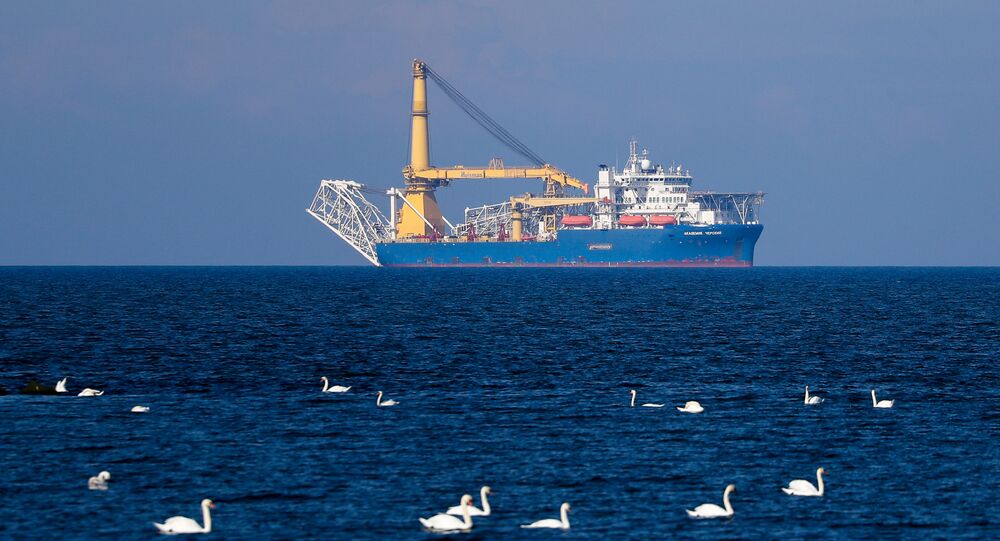 Construction of the $10.5 billion, 1,230 km energy mega-infrastructure project is proceeding apace and is expected to wrap up in August. Work on Nord Stream 2 began in 2018, and it faced an uncertain future between 2019 and 2020 as Washington sought to sabotage it via sanctions and threats against its European allies.

The Akademik Cherskiy pipelaying ship left Danish waters early Monday morning and sailed into Germany’s exclusive economic sea zone to complete a 2.6 km section of pipeline for the second line of the Nord Stream 2 project, the operator’s press service has confirmed to Sputnik.

“All work is being carried out in accordance with permits which have been received,” the company said, confirming that Germany’s maritime authorities have published relevant notices for mariners.

According to MarineTraffic data, the pipelayer is now situated northeast of the German island of Rugen in a state of restricted maneuverability, with the Russian-flagged Fortuna pipelaying crane vessel, the Sivuch, Venie and Ostap Sheremeta offshore supply ships, the Murman salvage/rescue vessel and the Vengery multipurpose offshore vessel present in the vicinity.

Last week, the German Economy Ministry confirmed to Sputnik that Nord Stream 2 was nearing completion, and that “the process of technical acceptance” was underway, with the first line completed, and the second line almost ready.

Nord Stream 2 AG director Matthias Warnig has told German media that the project was 98 percent complete and that pipelaying work would “be done by the end of August,” with the network to be put into operation later this year.

© Photo : nord-stream2
Nord Stream 2: Zelensky Adviser Accuses Merkel of Betraying Kiev's Interests in Favour of Moscow
Once complete, Nord Stream 2 will double the existing Nord Stream network’s capacity, from its current capability to pump up to 55 billion cubic meters of Russian natural gas per year to 110 billion cubic meters per year. The pipeline network passes through the territorial waters or exclusive economic zones of Russia, Finland, Sweden, Denmark and Germany.

The United States and its Eastern European allies including Poland, Lithuania, Latvia and Ukraine have spent much of the past three years seeking to sabotage the energy infrastructure project, deeming it a security threat to Europe and urging the continent to buy more expensive US liquefied natural gas instead. Germany – the project’s main benefactor, has dismissed US and European Union pressure, stressing that considers Nord Stream 2 to be an economic venture which will help ensure Berlin’s energy security as the country transitions away from nuclear and coal power plants to green energy. In addition to being able to transport gas, Nord Stream 2 will have the capability to carry hydrogen– a major clean fuel which Germany expects to develop extensively in the coming years.

Along with Russia's Gazprom and Germany's Uniper and Wintershall, France's Engie, Austria's OMV and the UK-Dutch concern Royal Dutch Shell are partners in the Nord Stream 2 project.