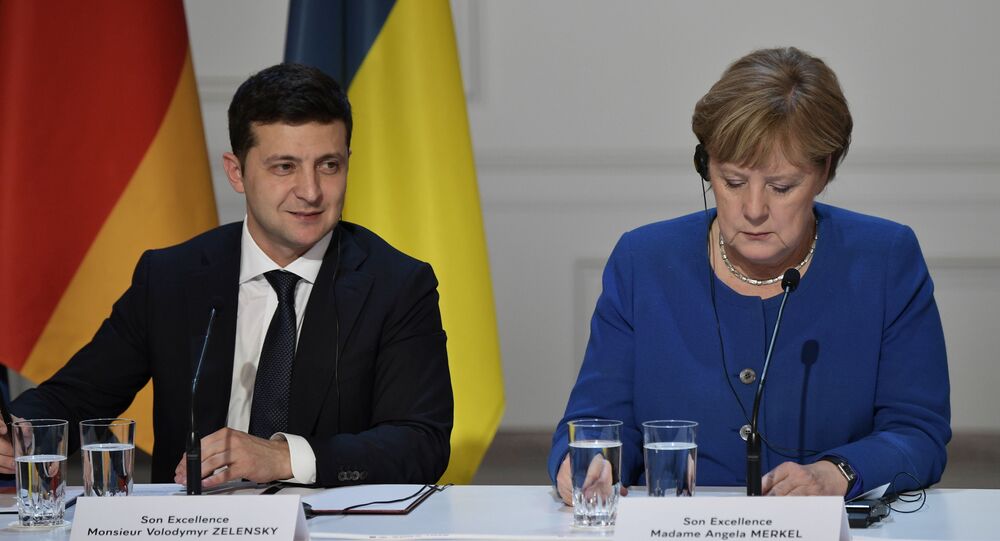 Successive post-Maidan coup Ukrainian governments have vocally criticised Germany’s central role in the Nord Stream 2 gas mega-infrastructure project with Russia, warning that the pipeline could not only deprive Kiev of much-needed income from the transit of gas, but pose an unspecified “security challenge.” Berlin has dismissed the latter claims.

Germany could mend its disagreement with Ukraine over the Nord Stream 2 gas pipeline project by compensating the Eastern European nation economically if it loses its status as a gas transit nation, Spiegel has reported.

In an article published ahead of German Chancellor Angela Merkel’s upcoming meetings with Ukrainian and US leaders next week, the magazine suggested that among the options being discussed in Berlin was “cooperation” with Kiev “in the production of hydrogen,” a prospective clean fuel source which Germany and other European Union countries expect to develop heavily over the next two decades.

Another option reportedly includes making a commitment to Kiev to spend several billion euros to repair the country’s gas infrastructure, which is said to be in a poor state.

© Photo : Victor Korniyenko
Map of Ukraine's immense gas transit network, most of it built during the Soviet period and in need of modernization.
© Sputnik / Dmitry Lelchuk
Zelensky Calls Nord Stream 2 'Weapon' Against Ukraine and Europe
Ukrainian President Volodymyr Zelensky will visit Germany on Sunday, and promises to present German Chancellor Angela Merkel with “compelling arguments" against commissioning the nearly-complete Nord Stream 2, with his arguments including that the pipeline project is “harmful” to “both Ukraine and European countries” and that it can be used as a “weapon” by Moscow.

On Friday, Ukrainian Prime Minister Denys Shmyhal vowed that Kiev would continue fighting against the pipeline, and that even if its campaign failed, the European Union could agree to drastically limit its use.

Ukraine’s authorities have spent the last six years attacking Nord Stream 2, with the pipeline infrastructure – which runs along the bottom of the Baltic Sea from Russia to northeastern Germany – expected to completely bypass traditional transit nations including Ukraine and Poland, allowing Russia to export gas directly to Western Europe.

In 2019, Ukrainian officials calculated that they would receive about $15 billion in revenues from the transit of Russian gas over the coming five years. But the country’s future status as a transit nation has been put into question as a result of the unprecedented collapse in relations between Kiev and Moscow in the aftermath of the 2014 Western-backed coup in Ukraine, and repeated threats by authorities to turn off the taps amid gas disputes with Russia’s Gazprom even before that.

Chancellor Merkel will meet US President Joe Biden at the White House on Thursday, with Nord Stream 2 issue widely expected to be among the problems discussed. Like Ukraine, the United States has pressured Germany heavily in recent years to torpedo the project, threatening sanctions and pushing Berlin to buy more expensive American liquefied natural gas instead of Russian pipeline gas. In May, Biden waived US sanctions against Nord Stream 2’s Switzerland-based operator – Nord Stream 2 AG – in a bid to improve transatlantic relations in a post-Trump world. At the same time, Washington has reserved itself the right to level new restrictions on the project at its leisure based on Russian “behaviour.”

© Sputnik / Alexander Galperin
Germany Wants Speedy Completion of Nord Stream 2, Clean Hydrogen From Russia, Saxony Chief Says
Germany has long resisted US and European pressure against Nord Stream 2, saying that it is strictly an economic project that will serve the continent’s economic interests and help guarantee its energy security. Additionally, German business leaders have expressed interest in the network’s ability to carry hydrogen, with the pipeline fillable to 70 percent capacity with the prospective clean fuel. The pipeline’s use to carry hydrogen could help Europe in its ambitious plans to build 3,700+ hydrogen refuelling stations in the next decade, and Germany in its bid to do away completely with the use of traditional internal combustion engine vehicles by 2040.

Once finished, Nord Stream 2 will double the existing Nord Stream network’s transit capacity to the equivalent of 110 billion cubic meters of gas per year. The project is expected to be completed and launched later this year.