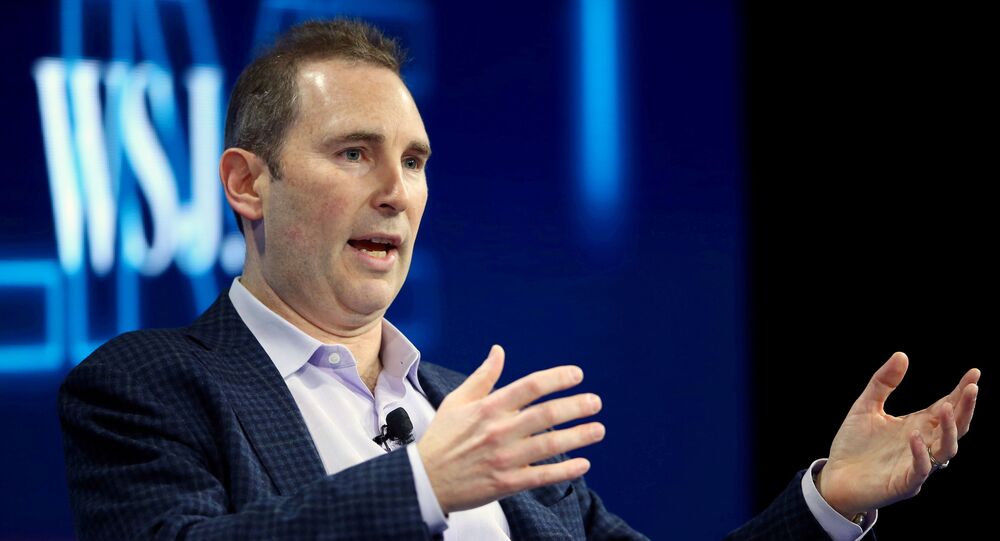 From Hitting Bezos With Stick to Replacing Him as CEO: What We Know About New Amazon Boss Andy Jassy

While the first encounter between the outgoing and incoming CEOs of Amazon was arguably not ideal, this did not stop Bezos from seeing potential in Andy Jassy, who made a number of proposals that turned out to be significant for the company.

Amazon's long-time CEO Jeff Bezos announced back in February 2021 that he would be stepping down from his post and instead observe the company's activities as executive chair of the board. He is set to be replaced on 5 July, the 27th anniversary of Amazon, with the head of its fastest-growing divisions, Andy Jassy, stepping in to manage the company's day-to-day operations.

Here is what we know about the new CEO of the US tech giant:

Unfortunate Encounter With Bezos and Significant Proposals for Company

Jassy joined Amazon in 1997, when the then-online book retailer was only preparing for its initial public offering (IPO). The Harvard University and Harvard Business School graduate bumped into the company's founder and CEO, Jeff Bezos, during a session of the company's favourite competitive sport, "broomball". He accidentally hit his boss over the head with a paddle that is used to play the game. Bezos, however, bore no hard feelings and despite what was perhaps not the smoothest introduction, he repeatedly promoted the Harvard graduate in the subsequent years.

Andy Jassy's rapid rise through Amazon's ranks was apparently well-deserved, as he was the author of several ideas that the company greatly profited from. He was namely behind the proposal to add CD and DVD sales to the company's portfolio. Possibly his most successful pitch happened in 2003: after reviewing the causes of the lengthy development time for new apps, Jassy proposed establishing a cloud service for sharing data in order to speed up the process. This service was then sold to other companies and later became known as Amazon Web Services (AWS).

The new Amazon CEO led the AWS division and under his leadership, it became one of the top contributors to the company's massive profits. AWS generated $4.2 billion, or 46%, of the company's operating income in the first quarter of 2021 alone. This is 32% more than in 2020, when the online giant was enjoying a boom in demand due to the COVID pandemic. The latter also contributed to the success of AWS, as many online platforms, which have also been in high demand with people stuck at home, operate based on AWS cloud infrastructure.

The Man Who Will Defend Amazon

While the new Amazon CEO has not yet made any public statements on what changes the company can expect in the near future, one task looms on the horizon for Andy Jassy – to defend the company in the face of government scrutiny and recent criticism from the general public.

Amazon landed in the government's crosshairs over allegations that it had not been paying its fair share in taxes. Criticism of the company has intensified in light of scandals around the alleged mistreatment of its own workers. The accusations began as claims that the tech giant was controlling every move made by its employees working at its warehouses, while allegedly only paying the bare minimum. The allegations evolved further over the course of the pandemic year 2020.

The company fired several of its employees in April over failing to follow recommendations linked to COVID-19, but the former workers claimed that the sacking was revenge for their protests against poor working conditions. The situation was further worsened by the publication of a report claiming that Amazon delivery drivers were in such a crunch that they had to urinate in bottles in order to meet their quotas.

The new CEO will apparently have to deal with lingering PR scandals and threats of probing the company for potential violations. It is possible, however, that Jassy will be more transparent when engaging these issues. In the past, he has not shied away from commenting on his social media on a number of high-profile social issues: the killing of Breonna Taylor by police in 2020, the high incarceration rate in the country, and the perceived racial bias associated with it.

Space Race 2.0? Richard Branson Announces He Will Fly to Space Before Bezos

France to Push for Minimum Tax for Amazon

Never Come Back: Jeff Bezos and 7 Other People Who Earned a Place on a One-Way Journey to Space