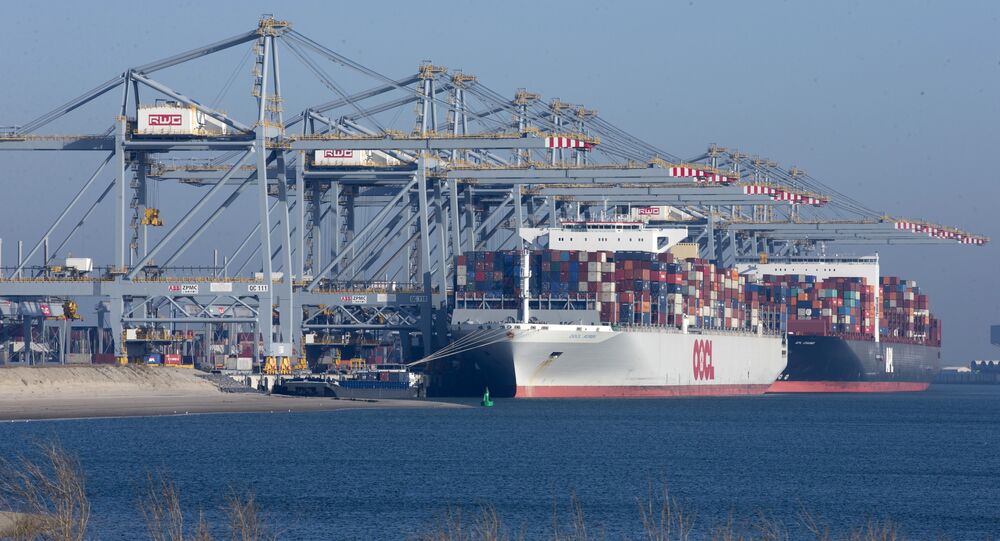 US, EU Commit to Ending $18 Billion Tariff War Before End of Year - Reports

The decision by Washington and Brussels to resolve all outstanding trade disputes before the end of the year comes after the European Union decided in May to waive automatic increases in tariffs on some US-made goods.

The US and EU will commit to ending their trade disputes and removing tariffs on aluminum and steel before the end of 2021, according to Bloomberg News, which viewed a document about the upcoming June 15 EU summit US President Joe Biden will attend.

According to the report, the topics set to be resolved include a dispute over state support for aircraft maker Airbus by the governments of Spain, France, Italy, and the UK. The World Trade Organization authorized US tariffs against $7.5 billion in EU exports in 2019, and the EU in turn was authorized to impose $4 billion of its own tariffs on US goods. In March, the US and EU reached an agreement to suspend tariffs on Airbus and Boeing for four months.

As early as December 2020, UE officials reached out to US President-elect Joe Biden about a change in trade policy between the US and the 27-member bloc. The dispute dates to 2018, when then-US President Donald Trump imposed a 10% trade penalty on aluminum and a 25% penalty on steel imported from the EU, calling them a threat to national security.

However, in response to the tariffs, the EU imposed its own on US goods in retaliation, including peanut butter, bourbon, denim, orange juice, and motorcycles, among other goods.

Trump imposed similar tariffs on China, not all of which were resolved by the Phase 1 trade deal agreed to in January 2020. The tariffs were part of his same populist appeal to sections of the US manufacturing sector, to whom he said he was saving American jobs by protecting US industries from foreign competition, which he called "unfair."

In May, the Biden administration also decided to drop sanctions imposed by Trump against Swiss pipelaying firm Allseas for its work on the Nord Stream 2 pipeline that caused the company to withdraw from the project. The 745-mile-long pipeline will carry up to 55 billion cubic meters of Russian natural gas to Germany annually. Washington has claimed the pipeline is a tool for Russia to apply political leverage over Western Europe and a deliberate bypassing of another pipeline through Ukraine, but Moscow has said the venture is purely economic in scope.

Russia is the world's second-largest producer of natural gas after the US and the largest provider of European gas. In 2018, Trump successfully pressured Berlin into building a liquified natural gas (LNG) facility and accepting US exports, and in December 2019 imposed sanctions on companies working with Russian state-owned firm Gazprom on Nord Stream 2.

However, while Biden dropped the Trump-imposed sanctions, he also imposed blacklisted 13 Russian ships and three Russian firms working on the project. US Secretary of State Antony Blinken said on Monday the US could also rescind a waiver given to Nord Stream AG, the company overseeing construction of the pipeline, if Russia were to "use gas as a coercive tool or weapon against Ukraine or anyone else."

On Friday, Russian President Vladimir Putin revealed the first leg of the $11 billion pipeline had been completed, in spite of pressure from Washington.