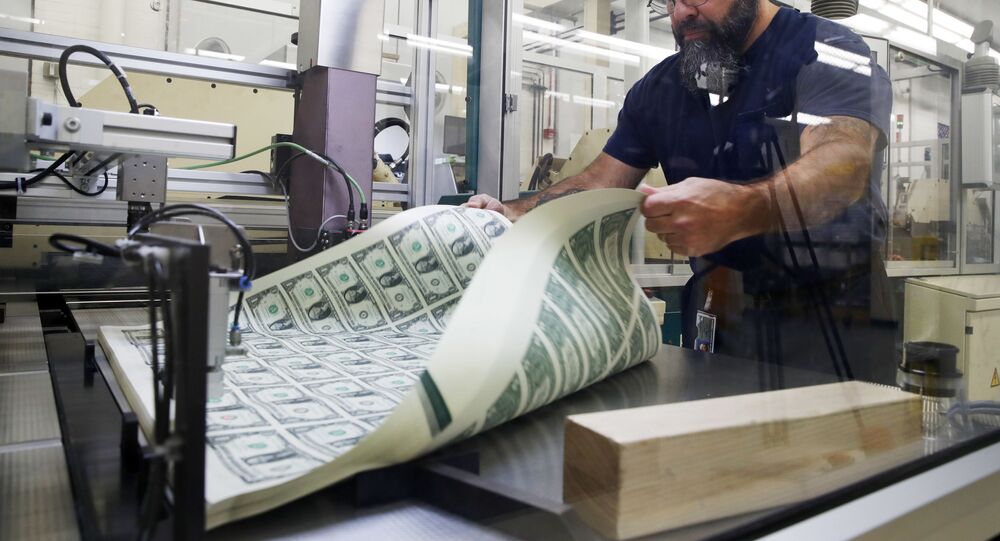 The US Federal Reserve injected trillions of dollars into the economy over the past year to combat the impact of the coronavirus pandemic in a process known as “quantitative easing.” Recent estimates indicate that the cash money supply in the US economy grew from $15.4 trillion to $19.7 trillion between 2020 and 2021.

The US dollar is continuing its slide against other major currencies, including the euro, with early Thursday European trading seeing a continued drop in currency-currency value attributed to fading bond yield support.

The euro hit 1.21 euros per USD, close to surpassing highs unseen since February, with the British pound reaching 1.39 USD, its strongest showing since 18 March. The dollar can buy 108 Japanese yen, edging toward a seven-week low, while the onshore yuan has hit 6.48 per dollar – the Chinese currency’s strongest level since 12 March. The Canadian, Australian and New Zealand dollars have also ticked up against the dollar this week amid improving economic outlook projections in all three nations.

Overall, the dollar index tracking the greenback’s health against a basket of half a dozen other major currencies saw a decline to 91.013 points, slightly above the seven-week low of 90.856 seen Tuesday.

© AP Photo / Vincent Yu
Digital Yuan's Potential to Shake Dollar’s Reserve Currency Status Causes Concerns in US, Media Says
Traders are awaiting a European Central Bank meeting to be held later Thursday, with the bloc’s currency expected to tick up or down depending on whether or not its current monetary policy is preserved, and whether or not it makes any comments about the overall economic outlook or its bond purchasing strategy. The currency’s attractiveness could be impacted by policy in Germany – the European industrial powerhouse, as the Bundestag recently approved tougher COVID lockdown rules, which are expected to have an effect on economic activity.

Next week’s meeting of the US Fed is expected to offer additional trading cues. Washington lawmakers have pumped over $6 trillion into the economy over the past year to tackle the economic crisis caused by lockdowns, business closures and job loss associated with the coronavirus. The new cash, which added trillions to the US’s already gargantuan federal debt (which recently surpassed $28 trillion) has led to fears of serious inflationary pressures – a phenomenon America has traditionally been shielded from thanks to its status as the de facto world reserve currency.

Last month, Clinton-era Treasury chief Larry Summers described the federal government’s current macroeconomic policy as the “least responsible” he’s seen since the early 1980s, and warned that the US may be heading toward a new stagflationary crisis – i.e. a period of high inflation combined with economic stagnation.

Last month, amid fresh threats of economic sanctions from Washington, Russian Foreign Minister Sergei Lavrov encouraged Russia and China to continue moving away from the dollar in trade and payment systems, and accused the US of using its currency to promote an “ideologized agenda aimed at maintaining their dominance by holding back the development of other countries.”