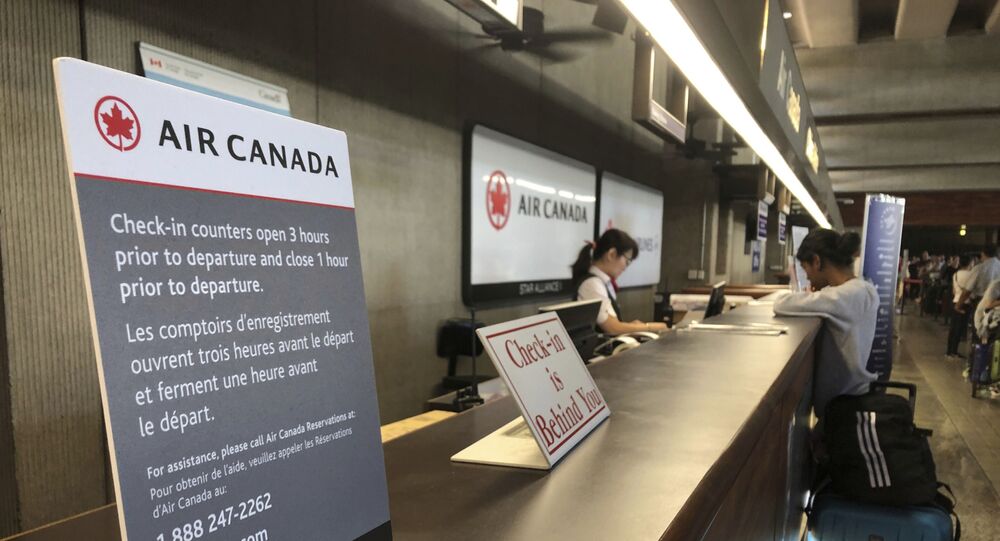 TORONTO (Sputnik) - Air Canada and the federal government have struck a deal that will see the country’s flag carrier be given access of up to $4.68 billion in liquidity through a federal COVID-19 stimulus program for large businesses, the airliner said.

"Air Canada announced today that it has entered into a series of debt and equity financing agreements with the Government of Canada, which will allow Air Canada to access up to $5.879 billion [$4.68 billion USD] in liquidity through the Large Employer Emergency Financing Facility (LEEFF) program," the company said in a press release on Monday.

Air Canada will be eligible to receive funding through a mixture of secured and unsecured credit facilities, but the company has vowed to draw on credit only as required.

As part of the deal, the company made several commitments, including the government receiving an equity stake in the company.

Canada’s flag carrier must begin providing customers with refunds beginning on April 30, at the latest, and the company has committed to maintaining current staffing levels. Air Canada currently employs 14,859 employees, although thousands have been laid off since the onset of the pandemic last March.

The company has also been given a deadline to resume flights to more remote and smaller Canadian cities and towns, including Fredericton, Yellowknife and Goose Bay.

Canadian Deputy Prime Minister and Finance Minister Chrystia Freeland added that all of the country’s commercial airlines can now apply for federal funding to reimburse passengers for canceled flights. Canadian travelers have grown increasingly frustrated with the country’s airlines reimbursing canceled flights with vouchers instead of refunds amid the novel coronavirus (COVID-19) pandemic.

Freeland noted that company executives will be limited to $800,000 in total compensation as part of the agreement.

The Canadian government has been mulling a possible boost for the beleaguered industry since the onset of the pandemic last spring, but no concrete announcements had been made until today. Freeland defended the government’s response, saying it has provided additional support throughout the past year while noting that good deals “sometimes take a little time” to make.

'This is Biden's America': Online Fury Over Photo of Maskless John Kerry on American Airlines Flight