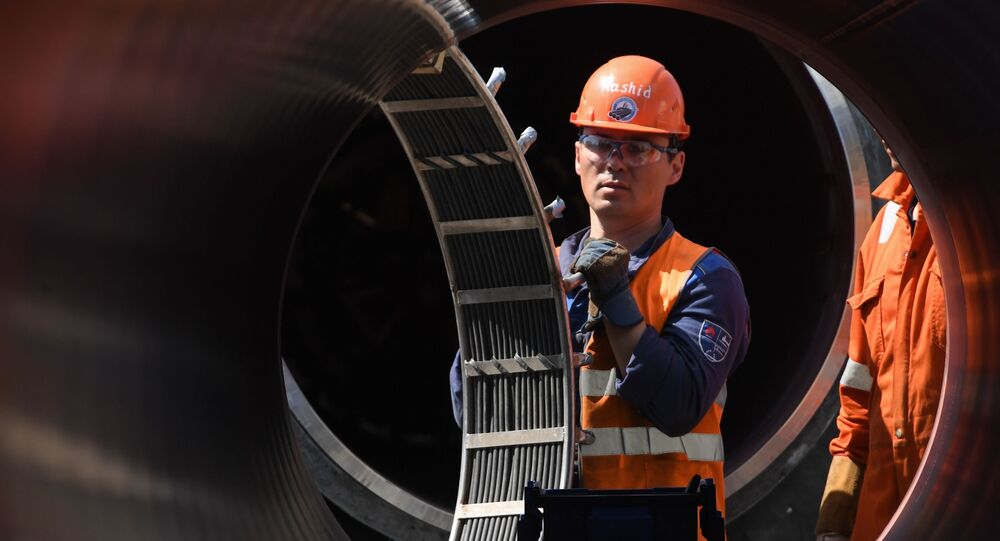 Lawmakers have already approved sanctions against the joint Russian-Western European energy project in two must-pass defence bills in late 2019 and late 2020, with the restrictions threatening companies working on the pipeline network with crushing “and potentially fatal” consequences. Moscow has promised that the project would be completed.

The United States will impose more sanctions against Nord Stream 2 if it is determined that construction activity “meets the threshold for sanctions”, State Department spokesman Ned Price has indicated.

“The president of the United States, Secretary Blinken, others in this government have made this administration’s view unavowedly –unambiguously clear that Nord Stream 2 is a bad idea. It goes against Europe’s own stated energy interests. It goes against our interests in the region as well,” Price said, speaking at a press briefing on Thursday.

Pointing to congressionally mandated guidelines requiring the president to keep Congress apprised of Nord Stream 2-related developments every 90 days, the spokesman explained that “during that 90-day period, we will continue to evaluate the pipe-laying activity that is ongoing in the region.”

“If this activity meets the threshold for sanctions, I have no doubt – you should have no doubt –that this administration will follow the law. And if the law states that entities should be sanctioned for their pipe-laying activity, I suspect you’ll be hearing more about that from us,” Price promised.

In January, the Biden administration slapped sanctions against the Russian-flagged Fortuna pipelayer and its owners over its involvement in Nord Stream 2’s construction. It’s unclear whether the restrictions have had any impact whatsoever on the vessel, given that it is continuing construction in Denmark’s exclusive economic zone.

On Wednesday, Secretary of State Antony Blinken told lawmakers that the White House would “look at very carefully” whether Nord Stream 2 AG – Nord Stream 2’s operator, was engaging in any “sanctionable activity”. Blinken added that the US was looking at other possible sanctions targets, with that process underway since February.

© REUTERS / ANTON VAGANOV
House Republicans Urge Blinken to Slap More 'Mandatory' Sanctions on Nord Stream 2
Earlier this month, House and Senate Republicans sent the White House letters demanding new sanctions against the energy project, with senators temporarily blocking the confirmation of Biden’s CIA chief and claiming that allowing the project to be completed would enable Russian President Vladimir Putin to “gain a stranglehold over Europe’s gas supplies”. House lawmakers, meanwhile, allege that the Biden team’s “strong statements in opposition to the pipeline are not being matched by equally strong actions”.

Previously introduced sanctions have prompted several companies – most notably Switzerland-based contractor AllSeas, to pull out of Nord Stream 2. Other firms, including insurers and certification providers, have also halted their involvement amid fears of retribution from Washington. The project’s major sponsors, including Gazprom and five Western European energy companies, have stood by their commitments, and Moscow has indicated that the companies which have dropped out can be replaced with Russian analogues apparently unmoved by the prospect of US sanctions threats.

Officials from Russia and Germany (Nord Stream 2’s main Central European benefactor) have blasted the restrictions, with Russian Foreign Minister Sergei Lavrov suggesting that sanctions not only violate international law, but are a case of “unfair competition” and an attempt to bully Europe into buying more expensive US gas. Berlin, meanwhile, has repeatedly rejected the prospect of new extraterritorial sanctions against the project based on US laws, with some lawmakers in the Bundestag suggesting that Germany needs to draw up potential counter-sanctions in the face of US restrictions.

Nord Stream 2 is a joint venture between Russia’s Gazprom, Germany’s Uniper and Wintershall, France’s ENGIE, Austria’s OMV, and the UK-Dutch conglomerate Royal Dutch Shell. Once finished, the pipeline network will be able to carry up to 55 billion cubic meters of gas per year from Russia to Germany, with the system also capable of carrying clean hydrogen. According to former German-chancellor-turned Nord Stream 2 AG chairman Gerhard Schroeder, the pipeline network will help assure German energy security for “generations” to come.

The project is over 95 percent complete, and construction is expected to wrap up sometime before the end of the year.