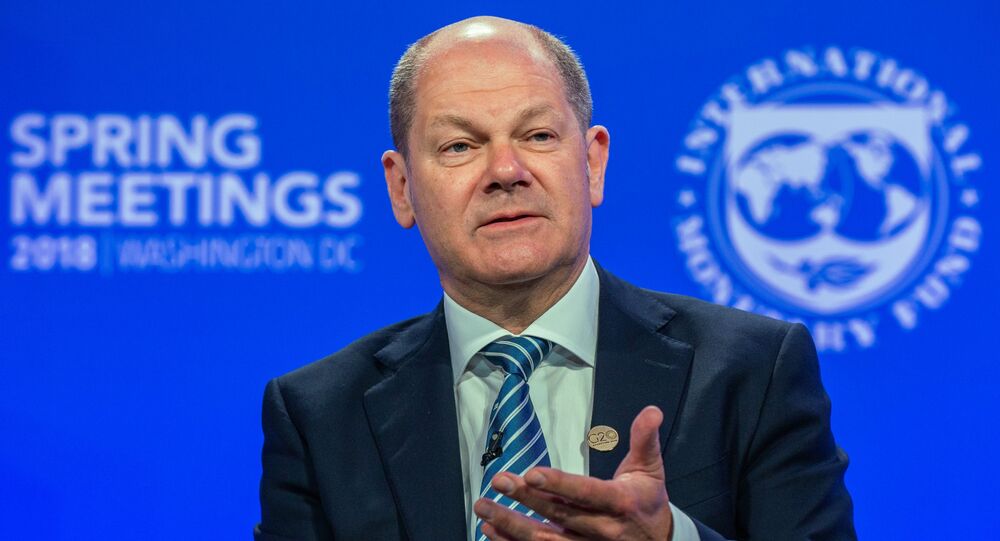 Last week, German media reported that the Biden administration has signaled readiness to lift US sanctions against the Nord Stream 2 gas pipeline project, with Washington's demands reportedly including the creation of a "shutdown mechanism" to account for Russian actions.

Opposition factions in the Bundestag led by the Greens summoned German Vice Chancellor and Finance Minister Olaf Scholz to appear before them within one hour to answer questions about Russia and the Nord Stream 2 gas pipeline project, German media reported Wednesday evening.

The minister was reportedly summoned while engaged in discussions on coronavirus policy at the Chancellory, with the Bundestag session suspended until his arrival.

The emergency summons follows Tuesday's release of a report by Environmental Action Germany (DUH), a local environmental and consumer protection association, accusing Scholz of offering a one billion euro investment in LNG infrastructure in Germany for the US if Washington dropped its sanctions against Nord Stream 2.

Scholz is alleged of having made the offer in a letter in 2020, with the letter said to have been addressed to then-Treasury Secretary Steve Mnuchin.

The vice chancellor is a member of Germany's Social Democrats, who participate as the junior partners in Chancellor Angela Merkel's Christian Democratic Union-led grand coalition. He is also the lead SPD candidate for the upcoming September 2021 federal elections.

German Environment Minister Svenja Schulze denied DUH's claims about a German offer to the US to drop its Nord Stream 2 sanctions, and questioned the Greens over over their criticisms of Berlin's energy policy without proposing any viable alternatives.

"I deny that there is some dirty deal, there is no such deal. I strongly deny it," Schulze said on Wednesday. "We are all unanimous that we want to end the use of coal and nuclear energy, we will write off nuclear power plants. This means that for the transition period we will need gas."

The minister expects Germany to continue to need gas "until about 2040" before greener alternatives are in place.

"For the time being we need gas, and we need many sources so that we can provide consumers with the most favourable conditions. I think this is the right way and we can only ensure this by using gas, and not alternatives, such as nuclear energy from France or [coal] supplies from Poland. What is the point of stopping an agreed project, paying billions for it, so as not to complete the pipeline? The only decisive factor is how much gas we will eventually use...If you have an alternative, let's discuss it. Research says we need gas for the transition period," the minister said.

Energy companies from Germany, Austria, France, the Netherlands and the UK are working with Russia's Gazprom to build Nord Stream 2, a $10.5 billion gas pipeline which will be capable of delivering up to 55 billion cubic metres of gas per year to Europe along the bottom of the Baltic Sea, doubling the capacity of the existing Nord Stream network.

© Sputnik / Dmitry Lelchuk
Merkel Denounces US Extraterritorial Sanctions Threats Over Nord Stream 2, Vows to 'Find a Solution'
The United States has imposed two rounds of sanctions against the energy project, and pressured Germany to scrap it. Berlin has rejected the pressure, pointing to the country's need for gas amid its decommissioning of nuclear and coal-burning power plants. The first round of US sanctions introduced in 2019 halted construction of the pipeline network after a Swiss contractor pulled out of the project. The second round, introduced in late 2020, had no impact on construction, with Russian ships expected to complete work later this year.
© AP Photo / Jens Buettner
The Russian pipe-laying ship ‘Akademik Tscherski’ which is on deployment for the further construction of the Nord Stream 2 Baltic Sea pipeline is moored at the port of Mukran on the island of Ruegen, Germany, Tuesday, Sept. 8, 2020

The Trump administration sought to pressure Europe into buying US liquefied natural gas, which is transported to the continent aboard tankers, and requires specially built pressurisation and depressurisation terminals, as an alternative to Russian gas. Current and former officials from Germany and Austria have indicated that in addition to being significantly more expensive than Russian pipeline gas, the American gas is dirtier, because it is derived from fracking.

Last week, German media reported that the Biden administration was considering providing Germany with a sanctions waiver on Nord Stream 2 if certain conditions, including guaranteed Russian deliveries of gas through Ukraine's transit pipeline network, were met. The State Department said last week that it was monitoring construction, and warned that it could slap additional sanctions on the project. Chancellor Merkel rejected the threats of new US sanctions, and promised to "find a solution" to the diplomatic conflict.