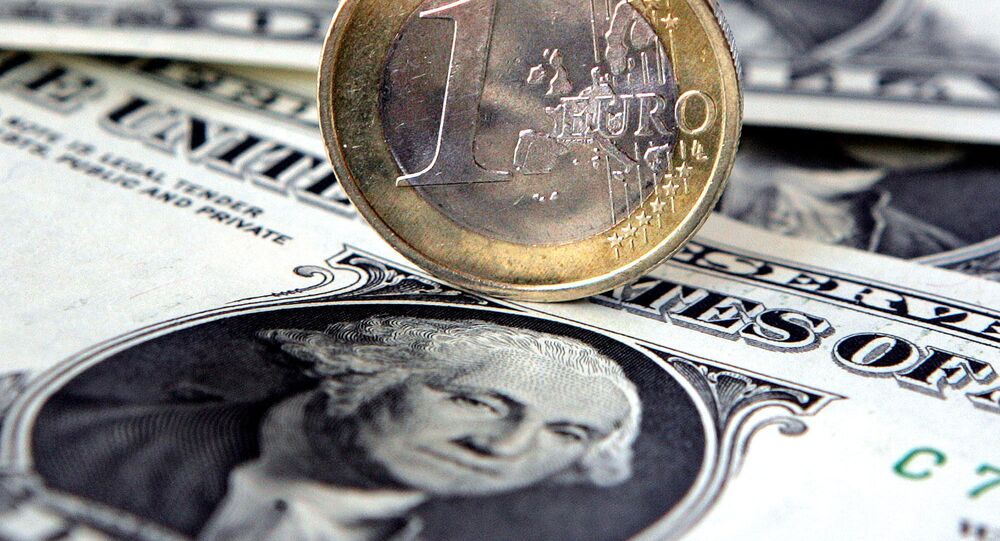 The EU launched a long-term plan back in 2018 for the wider use of the euro in the global economy to "better protect citizens and companies against external shocks", rendering the international finance and monetary system more resilient.

The European Union is pushing ahead with a detailed plan, seeking to shield the bloc from potential currency shocks by lessening the US dollar’s dominance, writes Bloomberg.

The strategy, laid out in a draft proposal, hinges on boosting the international role of the euro, while chipping away at reliance on the US dollar. The move is seen as potentially beneficial for cushioning the impact of a fallout from financial risks, including lessening the European bloc’s vulnerability to US sanctions.

“The extra-territorial application of unilateral sanctions by third countries has seriously affected the EU’s and its member states’ ability to advance foreign policy objectives, to honour international agreements and to manage bilateral relations with sanctioned countries,” the document says.

The plan, charged with fostering “openness, strength and resilience,” was earlier reported by the Financial Times, and incorporates measures to allow for the greater scrutiny of foreign takeovers.

“At times, unilateral actions by third countries have compromised legitimate trade and investment of EU businesses with other countries.”

The proposals also underscored that plummeting valuations of European stocks heightened the risk of some strategic firms being taken over against the backdrop of a continuing coronavirus pandemic, which has wreaked havoc on global markets and stunted economic growth.
The document, set to be adopted by the European Commission on 19 January ahead of the inauguration of US President-elect Joe Biden, is not final, and likely to be further augmented.

The developments are prompted by a slew of punitive measures announced by the administration of outgoing US President Donald Trump.

Sanctions slapped by Washington on individuals and countries including China, Iran, Russia, North Korea and Venezuela have had repercussions for companies and payment services across the globe.

In the case of China, tensions have escalated as the outgoing president ramped up pressure against the People's Republic in recent weeks. New restrictions came in the wake of a long-running trade war, fuelled in the last year by an exchange of heated rhetoric over claims about the origins of the coronavirus pandemic.

The US State Department has introduced new restrictions against a range of Chinese actors in a bid to "defend" the interests of South China Sea nations and their maritime claims, Secretary of State Mike Pompeo announced on 14 January.

The US also delisted three Chinese companies from the New York Stock Exchange and moved to add Xiaomi Corp., a smartphone maker, to its blacklisted batch of Chinese companies over alleged links with Beijing’s military sector.

In a statement to AFP, Xiaomi has strongly denied the accusations.

Apart from Xiaomi, the new ban has also targeted eight other firms, and feeds into the Trump administration's protracted crusade against Chinese tech producer and leading 5G equipment manufacturer Huawei.

In May 2019, the US Department of Commerce banned Huawei and 70 of its affiliates from doing any business with American companies, citing security concerns.

A new batch of sanctions against the Islamic Republic of Iran launched at the end of 2020 were cited by US academics as signalling a White House strategy to take "irreversible" measures against Tehran and throw up obstacles to restoring the Iran nuclear deal for the incoming Joe Biden administration.

The US has also pressured EU nations to abandon an alternative payment system meant to shield European trade with Iran from American sanctions.

In the summer of 2020, the European Central Bank (ECB) welcomed the decision by 16 European banks to launch the European Payments Initiative, which aims to create a unified payment solution for consumers and merchants across Europe, encompassing a payment card and a digital wallet and covering in-store, online and person-to-person payments as well as cash withdrawals.

Far-reaching plans to reduce the European Union’s dependence on the US dollar had been stated back in 2018.

The bloc sought to bolster its ability to run an independent foreign policy, which would be less ‘exposed’ to US sanctions.

At the time, the need was cited against the backdrop of the threat of punitive secondary sanctions from the US targeting European firms over investments in Iran.

The proposed measures included the use of the euro as a default currency in energy contracts agreed upon between EU member states and third countries. It was also suggested that euro-denominated price benchmarks be created for crude oil.

“A wider use of the euro in the global economy yields important potential for better protecting European citizens and companies against external shocks and making the international finance and monetary system more resilient,” EU economic affairs commissioner Pierre Moscovici had said.