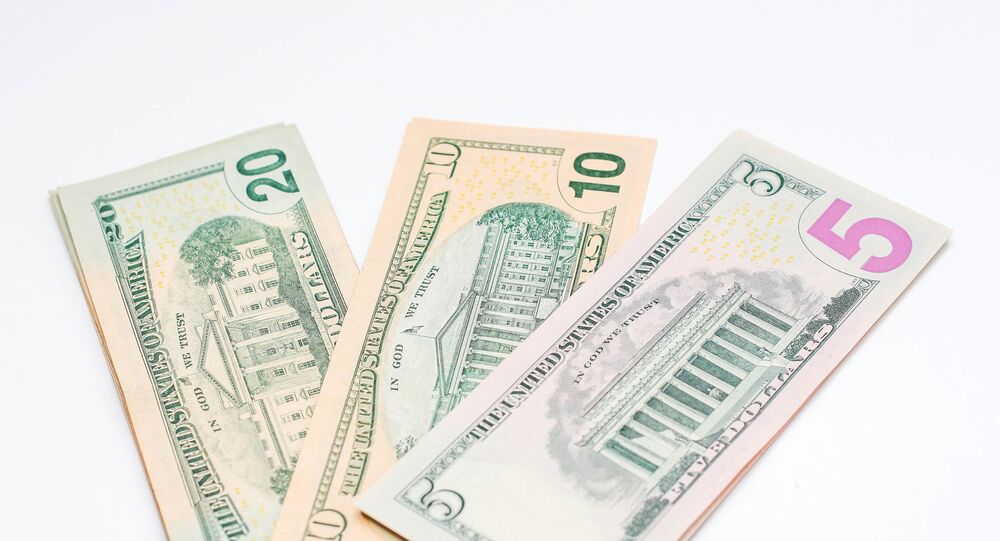 The American currency took a nosedive on news from US media that Democrat presidential candidate Joe Biden was forecast to win the 2020 elections, despite Republican Donald Trump refusing to concede victory, with economists predicting that a weakening dollar might become a long-term trend for a whole raft of reasons.

The US dollar dropped for the third consecutive day on 5 November, reaching its lowest level in more than two years as Joe Biden was mooted by American media as increasingly likely to claim the presidency.

The Bloomberg Dollar Spot Index dropped by as much as 0.9 percent to its lowest since May 2018. Against this backdrop the euro rallied 1 percent, and the yen gained its most in eight months, strengthening past 104 per dollar.

The downward trend in the #USD will likely continue, as captured in this Bloomberg Dollar Spot Index (BBDXY) shared by Lisa Abramowicz. As of Friday, BBDXY dropped to new post-2018 lows. @Twitter @business https://t.co/hyUv2zuwTp

“The dollar has been declining as a result of the increasing likelihood of a Biden victory. For now, the dollar is trading as a safe haven and the prospect that we are going to get a clear election result sooner than some had feared is currently reflected in rising risk appetite, and hence a weaker dollar,” Sonja Marten, a strategist at DZ Bank AG was quoted by Bloomberg as saying.

The Dollar’s slide is not unexpected, as investors have been bracing themselves for a weaker US currency in the case of a Biden win.

Headwinds for the dollar had been predicted as linked to a possible victory by Democrat Joe Biden, who had campaigned on pledges to pave the way for more fiscal stimulus to prop up the struggling economy amid the fall-out from the coronavirus pandemic.

In September, Democrats vowed a roughly $2.4 trillion stimulus Bill that would provide pandemic aid to American families, restaurants and airlines.

As for the Federal Reserve (Fed), signs that money-printing rather than government spending may be used to prop up the COVID-19 pandemic- riddled economy also suggested that clouds were gathering over the dollar.

At the same time Fed officials have clearly stated that interest rates would remain near zero for at least three more years amid risks for the flailing economy.

“We are committed to using our full range of tools to support the economy and to help assure that the recovery from this difficult period will be as robust as possible,” Fed chairman Jerome Powell told reporters.

Biden was suggested as unlikely to continue the tough trade policy espoused by Donald Trump if he were installed in the White House.

Trump’s stance had been driven by allegations of unfair trading policies and theft of intellectual property on the part of China, for example. A Biden win might alter the landscape somewhat, claim Citibank analysts.

“Perhaps the greatest clarity post-election is for global trade. US foreign policy will enter a more predictable phase without escalating tariff threats,” Citibank’s private bank division wrote in a note on 9 November.
The bank referred to the projected election result as a “return to traditional governance,” adding that markets will be able to “stop focusing on trade discord” at the levels of the past four years.

“As the province of the President, it will result in a major shift in the way foreign policy is conducted. Alliance building will return… 'Tariff threat first’ negotiating tactics will end,” stated the note.

Though such a reversal will obviously benefit some currencies, it would not work in favour of the dollar, claim analysts, explaining that easing trade tensions and a more predictable foreign policy without tariff threats will reduce demand for the American currency as a safe-haven currency.

“Easier fiscal policy and a larger budget deficit” were predicted as likely outcomes of a so-called “blue wave” if Biden were to win the White House , said analysts of Goldman Sachs.

“We continue to see a good case for sustained dollar weakness, reflecting the greenback’s high valuation, deeply negative rates in the US, and a recovering global economy (which tends to weigh on the currency because of its unique global role),” Zach Pandl, co-head of global foreign exchange, rates and emerging markets strategy at Goldman Sachs, is quoted as saying by Fox Business, adding:

“A Democrat sweep in the US elections could likely accelerate this trend.”

Biden's Labor Strategy; The Tax Game; The Darker Side of Immigration