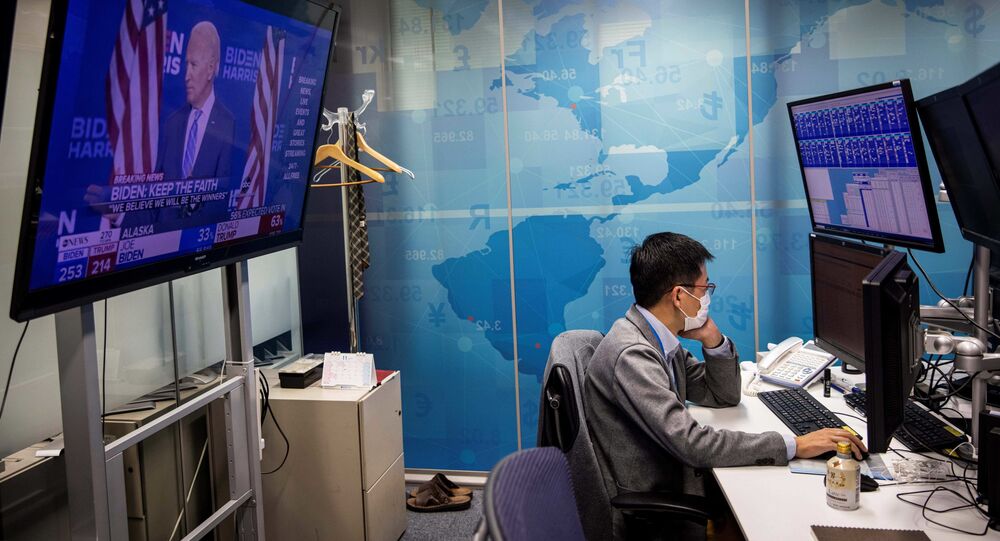 On Monday, the Trump campaign launched a legal battle against what they described as "fraudulent" votes in the US election, a few days after Democratic nominee Joe Bided was projected by major American news network as the winner.

Joe Biden's projected victory in the 3 November US presidential election has prompted increasing activity in global financial markets as stock indices across the world hit a record high.

The key MSCI (Morgan Stanley Capital International) world equity index of developed and emerging markets soared to its highest-ever level in early Monday trading, which was also the case with the FTSE (Financial Times Stock Exchange) 100 in Britain.

The FTSE 100 skyrocketed to a record 6,004 points in early trading, as the Europe-wide Stoxx 600 index as well as Germany's Dax and France's Cac indices also jumped to their highest levels over the past weeks.

The Guardian cited Connor Campbell, financial analyst on the trading platform Spreadex, as claiming that "the real test for the markets is going to be the coming days and weeks".

Campbell recalled that President Donald Trump shows no signs of conceding, adding that "enough of the Republican Party is willing to back up" his claims pertaining to voter fraud during the elections, something the analyst noted "could come to undermine the market's recent gains".

© REUTERS / Carlos Barria
As Trump Vows Lawsuits to Dispute Biden's Projected Victory, Can It Be Bush vs Gore All Over Again?
The forecast comes after POTUS declared "the simple fact is this election is far from over", accusing Biden of "rushing to falsely pose as the winner" after the ex-vice president was projected by major US news networks to prevail over Trump in the election race.

With Biden already proclaiming himself president-elect and vowing to unify the US in his recent address to the nation, Trump remains defiant, launching a legal battle against what POTUS earlier denounced as "fraudulent votes".