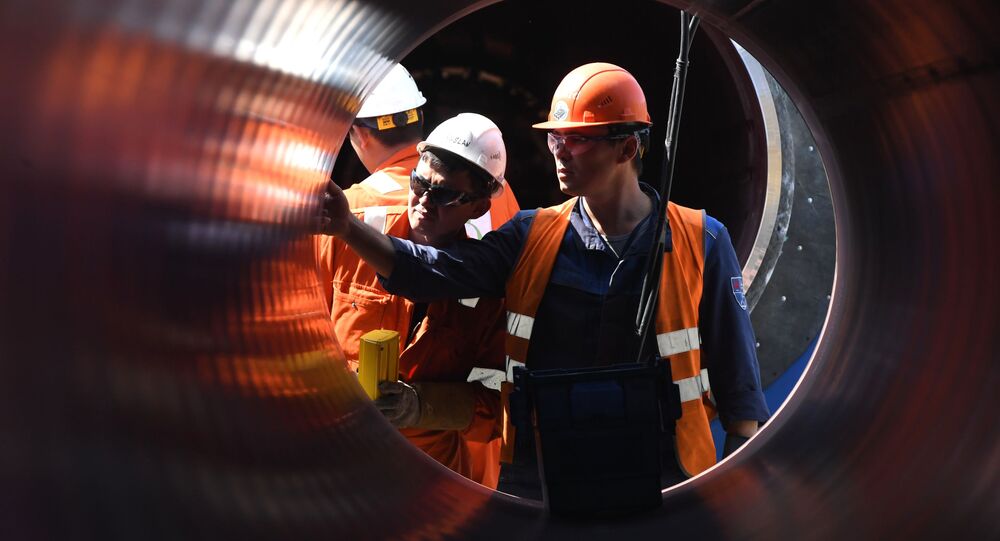 EU and Germany Won’t ‘Give Up’ Nord Stream 2, Analyst Says After Berlin’s Threat to Freeze Project

Washington has repeatedly put pressure on Nord Stream 2, claiming that the gas pipeline project may pose a security risk to Europe, while Moscow views the US actions as an example of unfair competition meant to boost exports of American liquefied natural gas to Europe.

Despite the German Foreign Ministry recently stating that Berlin doesn’t rule out freezing Nord Stream 2 over the alleged poisoning of Russian opposition figure Alexei Navalny, Russian experts have remained upbeat about the future of the gas pipeline project.

Ivan Timofeev from the Russian International Affairs Council, a non-profit think tank, said that even though new American sanctions will most likely be slapped on Nord Stream 2, both the EU and Germany are still interested in the completion of the pipeline’s construction.

“I don’t think they will give up the project, but due to US sanctions, businesses will leave it. Even if the authorities continue to defend themselves [in terms of Nord Stream 2-related issues], the final decision will be up to business circles”, Timofeev argued.

The view was shared by Artyom Sokolov of the Moscow State Institute of International Relations (MGIMO), who said that “the economic benefit from Nord Stream 2 is obvious to all political forces in Germany”.

“This is designed for the administration of Donald Trump, who is used to thinking in terms of good and bad deals”, the expert added, saying that Berlin could save face by “buying off the conflict of interests”.

The German newspaper Die Zeit recently cited a letter from German Finance Minister Olaf Scholz to US Treasury Secretary Steven Mnuchin as saying that the minister had offered the allocation of more than a billion dollars of public money to build two LNG terminals along Germany's Baltic coast that could accept US LNG imports. In return, Scholz reportedly asked Mnuchin to scrap US sanctions against Nord Stream 2.

Sokolov also recalled that there are “quite a few influential politicians oriented towards the US” in Germany’s governing Christian Democratic Union party, something that he said doesn’t mean that Berlin will finally yield to Washington’s pressure.

As far as Nord Stream 2 is concerned, “German politicians do not want to miss an opportunity to reinforce the integration processes in Europe with an additional resource factor”, the analyst concluded.

Earlier this week, the Russian president’s spokesman Dmitry Peskov told journalists that Nord Stream 2 is a commercial project that is profitable for both Russia and the EU, and that it should not be politicised. The statement followed German Foreign Minister Heiko Maas mentioning Nord Stream 2 in light of the Navalny case and adding that Berlin “will put all options on the table and make a decision [on the project] at the appropriate time”.

Moscow has vehemently denied Berlin’s Navalny-related ‘poisoning’ claims, stressing that no poison was detected in the opposition figure’s system before his transfer to Germany, and slamming the German government for its failure to provide Russia with any evidence to support its allegations.

In early September, Peskov pointed out that the Kremlin does not see any risk of Germany blocking Nord Stream 2's construction, while German Chancellor Angela Merkel stressed that the project will be completed despite US threats of sanctions.

The US has long opposed Nord Stream 2, claiming that it would grant Moscow political leverage over Europe by increasing the latter's dependence on Russian gas. Pressure was allegedly put on Germany, a key member of the project, despite Berlin vehemently insisting that Nord Stream 2 is purely economic in nature.

© Sputnik / Ilya Pitalev
Nord Stream 2 is Based on Multi-Billion Investments from Six Energy Firms, Not Political Deals, Operator Says
Moscow says that Washington's sanctions will not derail the project's implementation, adding that it views such actions as a manifestation of unfair competition that runs counter to international law.

Apart from the Russian energy giant Gazprom, five European companies are involved in the construction of Nord Stream 2, including France's ENGIE, Austria's OMV, the UK-Dutch company Royal Dutch Shell, as well as Germany's Uniper and Wintershall.

When completed, the pipeline will be capable of transiting up to 55 billion cubic metres of gas per year from Russia to Germany, thereby doubling the capacity of the existing Nord Stream network, and turning Germany into a gas hub.