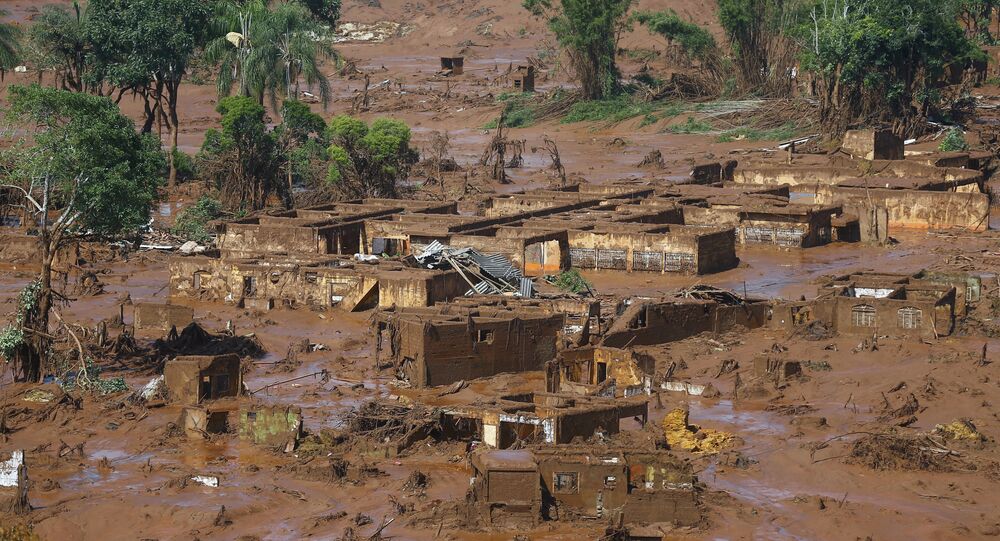 Will Anglo-Australian Mining Firm be Made to Pay in UK Court for Devastating Dam Collapse in Brazil?

BHP is an Anglo-Australian company which mines iron ore, coal and copper in Latin America, the US and Australia. In November 2015 two dams co-owned by BHP and a Brazilian firm, collapsed and inundated large areas of Brazil with water and toxic mud.

Lawyers for 240,000 people from two indigenous communities in Brazil are in court on Monday, 27 July, trying to persuade UK judges to hear a £5 billion lawsuit.

The claim, which was originally served at the High Court in Liverpool, is the largest in British legal history.

The Krenak and Guarani tribes hold BHP - formerly BHP Billiton - and a Brazilian firm, Vale SA, responsible for the failure of two dams in November 2015.

When the dams collapsed it flooded a huge area of Minas Gerais state in southern Brazil, killing 19 people and filling villages and fields with toxic mud.

The dams were owned by a company - a joint venture between BHP Billiton and Vale - which ran the Samarco iron ore mine.

The case was due to be heard in the High Court in April but it was postponed due to coronavirus travel restrictions, which prevented key witnesses from travelling from Brazil and Australia.

The case is being seen as a landmark test case for whether British companies can be sued in England for environmental damage caused abroad.

When the dams - which held waste water from the iron mine - burst 44 million cubic metres of red sludge poured into neighbouring villages and badly damaged the Rio Doce river, which was the lifeblood of the Krenak tribe.

Based on a complaint by 240,000 individuals affected by the Mariana dam disaster of 2015, a UK law firm is suing miner BHP for damages in a Manchester court. Meanwhile, a Brazilian court ordered the payment of damages.https://t.co/tfZl0JMEuk

​It was the worst environmental disaster in Brazilian history but four years later another dam owned by Vale, at Brumadinho, collapsed killing 259 people and causing great damage.

The Rio Doce - known to them as Uatu - not only produced fish for the Krenak but was a key part of their culture and was where children were baptised and taught to swim.

The iron ore we produce is turned into the steel the world needs to move forward. Learn more.

​Djanira Krenak, 70, a spiritual leader, told Reuters: "Uatu has died. I don't like to remember, because it hurts so much. The river is our mother, our father. And now she is dead."

The Krenak, the Guarani and several other plaintiffs are seeking US$6.3 billion (£5 billion) in damages and their lawyers are laying out their case in court on Monday.

Djanira said: “We can no longer eat capybaras, we can't eat birds, we can't eat honey, because the bees drink from the river. We can't hunt or fish.”

The Guarani live on the Piraquê-Açu river, which was also affected.

Kara’i Peru, a chief from the Guaranai tribe, told Reuters: "How are we going to live? There was some tourism...but that is all gone.”

Chief Peru said he hoped the UK lawsuit would give them the compensation they craved and added: "In Brazil there is no justice.”

Lawyers for BHP are also expected to argue the case should not be litigated in the UK as it is already being dealt with by Brazilian courts.

Shareholders in BHP Billiton filed a lawsuit against the company in 2018, claiming it had misled them about the safety risks prior to the disaster. The company settled a similar lawsuit with US shareholders, paying them US$67 million.