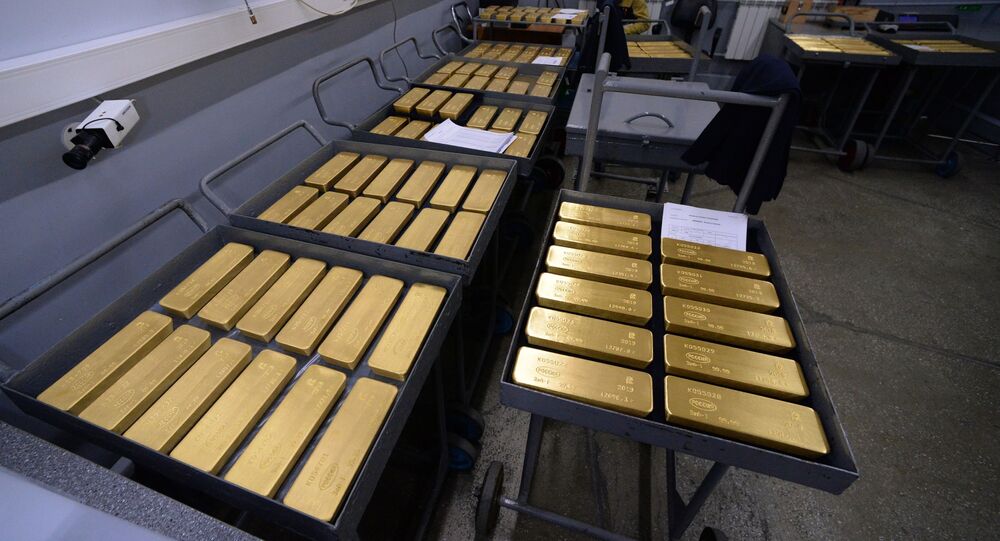 Russia Boosted International Reserves by Over 10%, Gold Stockpile by 28% in One Year

The country has been stockpiling gold since 2018 after a major shift in strategy that saw the US dollar's share in the portfolio significantly decrease, while the precious metal has replaced the greenback as a significant component of Russia’s assets used in its interactions with other countries.

The Russian Central Bank's latest report shows that the country has seen a significant increase in its international reserves, both since the beginning of this year and since July 2019. The reserves have grown to $574.2 billion – an $18.2 billion, or 3.27%, increase since the beginning of the year and a $53.9 billion, or 10.36%, increase since 19 July 2019.

The rise in foreign exchange assets and gold reserves contributed the most to the growth of international reserves, which continued despite the coronavirus pandemic's impact on the economy. Furthermore, the 10% annual rise in reserves goes in line with previous years' growth of 12.27% between 2018 and 2019 and 9.69% between 2017 and 2018.

At the same time, the level of Russia's Special Drawing Right (SDR) reserves, a supplementary foreign exchange asset issued by the International Monetary Fund (IMF), experienced a minor drop from $6.75 billion to $6.68 billion.

While foreign exchange reserves have gained an impressive $19 billion since last July, it was the gold reserves that contributed the most to the increase in Russia's ability to trade with foreign countries. The Central Bank has accumulated an additional $30.512 billion in precious metal assets, an increase of 28%, since summer 2019, although it's unclear how much of that sum was acquired via the purchase of new physical gold rather than via the re-evaluation of already existing funds. Gold prices have jumped by 25% since last summer because of the coronavirus pandemic and the ensuing turbulence on global markets.

The continuing growth of Russia's international reserves suggests that the country has so far managed to keep the pandemic's impact on the economy under control. It's also indicative of the new paradigm adopted by the central bank – ever since spring 2018, Moscow has been dumping its main dollar asset, US Treasury securities, reducing the amount from $96 billion to $48.724 billion. At the same time, Russia has started accumulating more gold every year, replacing the greenback with the metal in its portfolio. While the gold reserves grew by only around 13% between 2017 and 2018, they soared by around 28% between 2018 and 2019, making Russia the world's biggest buyer of the precious metal during the last couple of years.

Russian Ruble Weakens, Trades Near 75 Per US Dollar