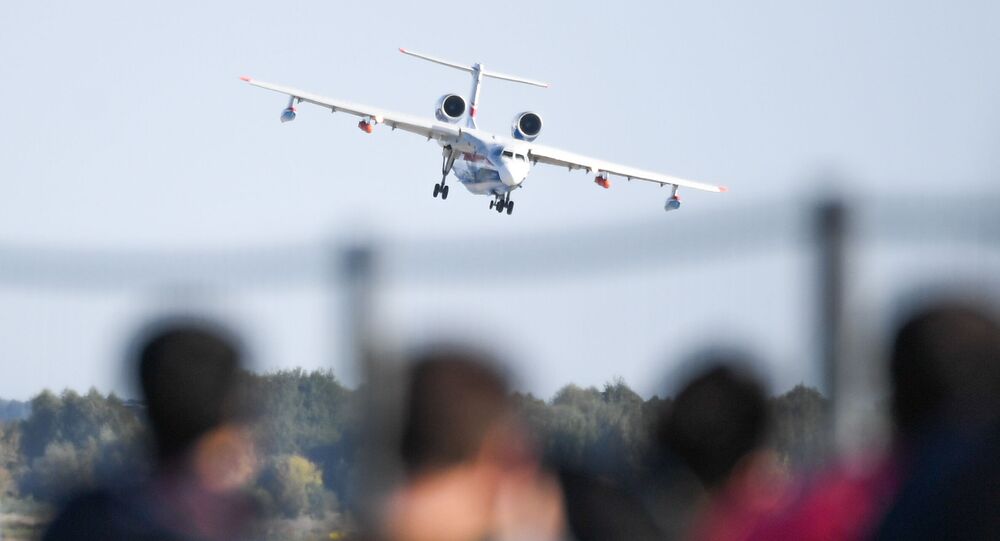 ANKARA (Sputnik) - Turkey is considering the possibility of purchasing Russia's Be-200 amphibious aircraft, which have been leased for four months for operations to extinguish wildfires during the upcoming forest fire season, Fizuli Mollaev, a board member of the Turkish SMS Savunma Sanayi company operating the aircraft, said.

"Our company won the tender announced by the Turkish Ministry of Agriculture and Forestry for extinguishing forest fires and signed a contract with Russia's UAC and the Ministry of Emergencies for leasing two Be-200 aircraft for four months with subsequent purchase. We will see how these planes perform in Turkey during the forest fire season, and the decision on their purchase will depend on this. In case of a favourable outcome of the trial period, we are considering the purchase of more of such aircraft in the future," Mollaev said.

According to Mollaev, SMS Savunma Sanayi received many competitive offers, including from Canadian and Japanese amphibious aircraft manufacturers.

"But we were determined to work with the Russian aircraft. We saw Be-200 aircraft at the Teknofest-2019 exhibition in Istanbul and compared its potential with other aircraft. Be-200 aircraft was created to save people and infrastructure. It is a multirole machine, which is much better than aircraft of the same type from other countries," Mollaev added.

A spokesperson for Russia's United Aircraft Corporation (UAC, part of Rostec) said on Tuesday that Russia had delivered to Turkey two Be-200 amphibious aircraft for helping the country extinguish wildfires at the request of the Turkish Ministry of Agriculture and Forestry.

In the coming four months, the amphibious aircraft with Russian crews will be on duty in the environs of Antalya, Izmir and Bodrum.

In September 2019, the government of Russia's Rostov region said that a Turkish delegation headed by the minister of agriculture and forestry had visited Beriev Aircraft Company, which designed the aircraft and showed interest in purchasing the Be-200 planes.

Be-200 was designed by Beriev Aircraft Company and built by Irkut Corporation. The planes are currently used by the Russian Emergencies Ministry in firefighting, patrolling, and search and rescue operations.

The aircraft can hold 12,000 litres (3,170 gallons) of water and is able to transport 42 tonnes of cargo. It is capable of landing both on the ground and on water.