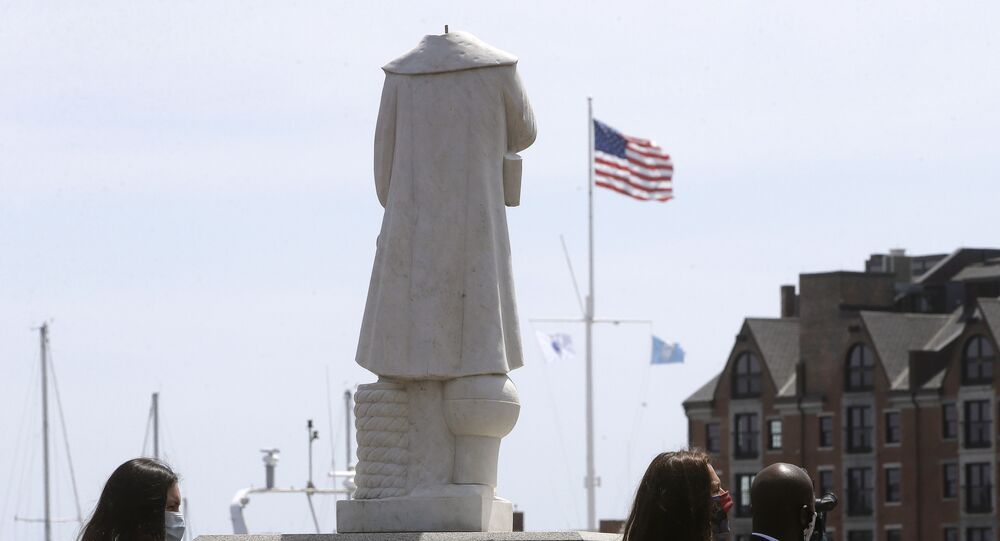 ‘Pretty Scary’: What Possible Repercussions of US Economic Recession Could Be

Earlier in June, US Federal Reserve Chairman Jerome Powell suggested that it could take years to return to pre-2020 job levels in the country, hit by the current economic downturn.

Last week saw American stock market indices showing a significant decline, in what came amid concerns about the future of the US economy due to the ongoing recession.

According to the National Bureau of Economic Research (NBER), the US officially entered a recession in February, when “a peak in monthly economic activity occurred in the American economy”.

The NBER’s Business Cycle Dating Committee said in a statement earlier this month that they admitted the coronavirus pandemic and the country’s public health response “have resulted in a downturn with different characteristics and dynamics than prior recessions”.

“[…] The unprecedented magnitude of the decline in employment and production, and its broad reach across the entire economy, warrants the designation of this episode as a recession, even if it turns out to be briefer than earlier contractions”, the statement pointed out.

The committee referred to “a significant decline in economic activity” which has already spread across the US economy, something that is “normally visible in production, employment, and other indicators”.

The statement was echoed by Bank of America economists led by Michelle Meyer who wrote in a note that they believe the US economy “has fallen into recession, joining the rest of the world, and it is a deep plunge”.

They predicted that US gross domestic product (GDP) will collapse in the second quarter, plummeting at least 12% on a annual rate basis, which will be the largest quarterly decline in America's post-war history.

The Federal Reserve Bank of Atlanta, however, went even further by forecasting that the second-quarter GDP would decline about 52.8%.

A pessimistic tone was also struck by US Federal Reserve Chairman Jerome Powell who referred to the situation in the national economy in the context of the looming growth of unemployment.

Powell argued that despite 2.5 million new jobs having been created in the US in May, many more that were lost during the pandemic might not return so quickly. The Fed chairman suggested that it could take years to return to pre-2020 job levels, a forecast which was rejected by President Trump, who tweeted that “the Federal Reserve is wrong so often”.

Lindsey Piegza, chief economist for Stifel Fixed Income, for her part, supported Powel’s view, adding “it’s pretty scary; I fear many of these jobs will not return and we are going to have an unemployment rate by 2021 of almost 10%”.

The same tone was indicated by Moody’s analysts who claimed that “a slower than expected recovery could lead to business destruction and structurally high unemployment, which could affect the ability of consumers and payers to fund healthcare expenditures”.

In this regard, Bloomberg cited two unnamed sources in the Federal Reserve Bank of San Francisco as saying that US unemployment may stay “severely” elevated next year.

“Our analysis suggests that returning to pre-outbreak unemployment levels by sometime in 2021 would require a significantly more rapid pace of hiring than during any past economic recovery”, the sources argued.

Treasury Secretary Steven Mnuchin, for his part, told the Senate Banking Committee in May that the unprecedented number of unemployed in the US due to the coronavirus-driven shutdowns are expected to "get worse before they get better”.

He spoke as the independent Congressional Budget Office suggested in an estimate that during the second quarter, “the labour market is projected to see the steepest deterioration since the 1930s”.

It remains to add that the current economic downturn in the US indicated the end of a record period of expansion that lasted for almost ten years after the so-called Great Recession caused by the 2009 global financial crisis.