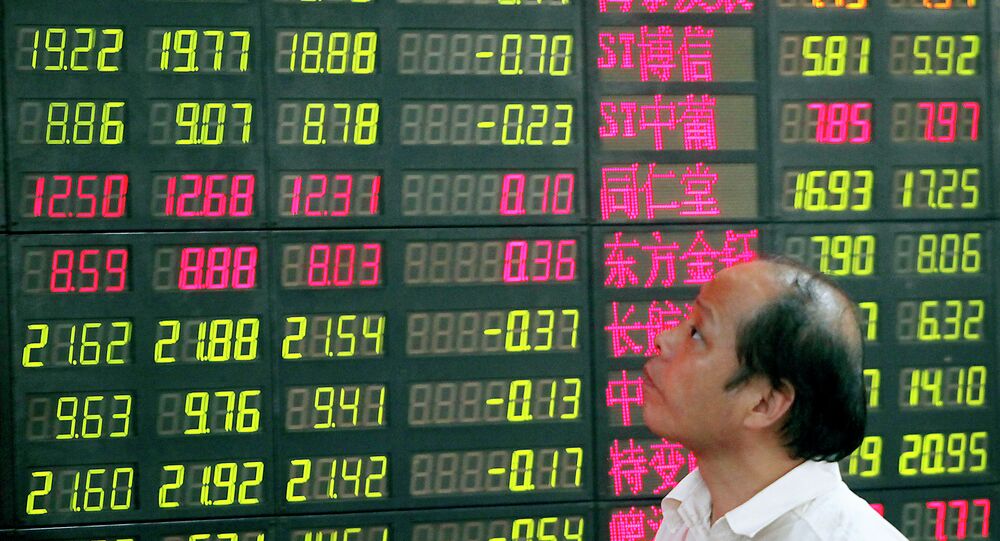 At the start of the week, on 25 May, China stocks had closed higher, buoyed by signs of gains in consumer companies, despite Washington and Beijing repeatedly exchanging barbs over US accusations of cover-ups and lack of transparency related to the COVID-19 pandemic.

China stocks tumbled on 27 May amid a fresh spike in Sino-US tensions and lingering uncertainty regarding the extent of COVID-19 fallout for the economy, reported Reuters.

The smaller Shenzhen index ended trading down 0.85 per cent, and start-up board ChiNext Composite index nosedived 1.964 per cent.

China's consumer staples sector displayed a drop of 1.15 per cent, while the healthcare sub-index dropped 1.96 per cent.

Data showed the real estate index rising by 0.19 per cent.

According to analytics, current hesitancy was motivated by a desire to hold back and monitor pace of the country’s economic recovery from the pandemic, as both activity and demand remain weak.

While there was a markedly less swift fall of profits at China’s industrial firms in April, nonetheless, according to Jingyi Pan, a Singapore-based market strategist at financial services firm IG, there were still many jeopardies to contend with.

"Risks of a second COVID-19 wave and further geopolitical tensions cannot be ruled out, but these have yet to morph into material impact at this point," the analyst was cited by the outlet as acknowledging.

News from the markets comes amid a renewed deterioration of relations between China and the US.

The two countries were supposed to negotiate a second part of the trade deal aimed at ending the long-standing tariff war between Washington and Beijing, however, the COVID-19 pandemic threw a spanner in the works.

The US President’s economic adviser Larry Kudlow has stated that reaching a trade deal with China is no longer on the top list of priorities for Donald Trump, more concerned with Beijing’s alleged cover-up of the seriousness of the coronavirus outbreak in the country in its early stages.

Washington has so far failed to substantiate the accusations, which have been vehemently rejected by Beijing.

President Donald Trump said on Tuesday that he was preparing a strong response to China's planned laws for Hong Kong, adding it would be announced before the end of the week.

Washington has been pressuring China over its intention to introduce a law in Hong Kong that would ban treason, sedition, and other acts that might divide the country.

Threatening to withdraw the trading privileges that the island currently enjoys, earlier in May, US Secretary of State Mike Pompeo doubted Hong Kong would be able to maintain a significant level of autonomy from China, and implied Washington could rethink its policy towards the special administrative region.

On 24 May US National Security Adviser Robert O'Brien threatened with the possibility of the US using sanctions against China after China's governing Communist Party proposed a bill to ban "separatist, subversive and terrorist activities" along with any form of foreign interference in Hong Kong.

Beijing has slammed US statements as interference in China's sovereign matters.

The National People's Congress is expected to vote on the contentious bill on 28 May, with the initiative having provoked another wave of protests in Hong Kong over concerns the legislation might undermine the administrative region's liberties and special position within China.