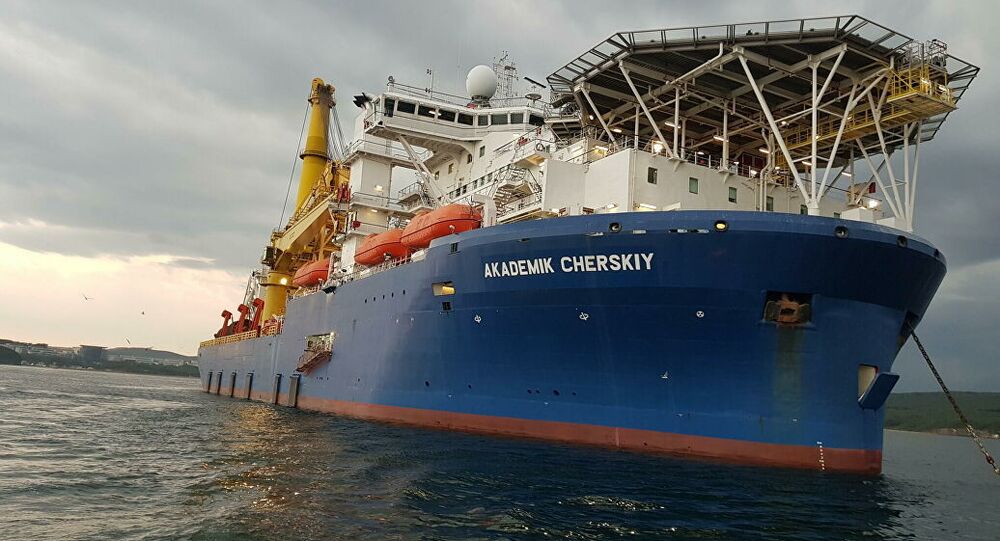 The Akademik Cherskiy, a Russian pipelaying vessel ordinarily stationed in the Russian Far East, set off for the Baltic Sea in February to help complete the Nord Stream 2 gas pipeline. In the months since, the vessel has engaged in erratic behaviour, repeatedly changing course without any explanation.

Repeated changes to the Akademik Cherskiy’s declared port of destination are the result of its desire to avoid unleashing the wrath of crushing US sanctions, Igor Yushkov, senior analyst at Russia’s National Energy Security Fund has explained.

“Why has the Akademik Cherskiy failed to indicate that it’s heading to the Baltic Sea to the area where the unfinished portion of Nord Stream 2 is? It’s doing so so that US regulators will have no formal grounds to place sanctions on the ship in advance, since this would make it difficult for the ship to pass through straits,” Yushkov explained, speaking to Russia’s National News Service radio station.

In reality, Yushkov believes, the vessel’s course hasn’t really changed much. “The ship is planning to sail through the English Channel, and indicating Nakhodka [as its destination] is quite logical. This fits into the Akademik Cherskiy’s recent behaviour. The ship has always been moving in the direction of the Baltic Sea…I would not be surprised if in a week it indicates its port of destination as St. Petersburg or Kaliningrad,” he said.

“The ship isn’t going to Nakhodka. And in that sense, Gazprom’s plan to complete Nord Stream 2 using the Akademic Cherskiy, the only Russian vessel with a dynamic stabilization system which Denmark requires to operate in its waters, has not changed either,” Yushkov insists.

Yushkov’s remarks followed reports on Sunday that the Akademik Cherskiy had once again changed course, switching its port of destination to Nakhodka from the UK Port of Aberdeen while sailing through the North Sea. Previously, the ship had indicated a final destination of Las Palmas, Spain.

Akademik Cherskiy, Russian pipe-layer that is supposed to try complete #nordstream2, will enter the Baltic Sea within a week. If no further upgrade needed, it may restart NS2 construction works as early as June pic.twitter.com/grvfLwh6eY

Sailing westward from the Russian Far East, the pipelaying ship previously raised eyebrows among observers by choosing to make the long journey around Africa instead of passing through the Suez Canal, which would have saved it time and several thousand kilometers of sailing. This too can be explained Yushkov said.

“Fuel today is cheaper, and passage around Africa is cheaper for the ship than heading through the Suez Canal,” he noted. Furthermore, “the ship does not need to rush. According to Gazprom’s plans, it would be better to start work in the summer anyway, when the weather is more favourable in the Baltic Sea. Then the Akademik Cherskiy will be able to lay up to 2 km worth of pipe per day.”

Furthermore, Yushkov said, Russia also has two other pipelayers in reserve. These were already used to complete the Russian portion of Nord Stream 2, and could finish the project if Gazprom got permission from Copenhagen.

The Akademik Cherskiy has been at sea for 77 days since setting off from Nakhodka on February 10. Russian Energy Minister Alexander Novak said in late 2019 that the ship was one of the possible options Gazprom had to complete Nord Stream 2. In January, President Putin said he expected the pipeline to be finished by the first quarter of 2021 at the very latest.

The Akademik Cherskiy’s deployment comes following Swiss-based Allseas Group S.A’s decision to suspend its pipelaying vessel’s work in the Nord Stream 2 project, with just 160 km left to build, in late 2019 amid fears that it would face “crushing and potentially fatal” US sanctions. Washington approved restrictions against the joint Russian-Western European project in December.

Nord Stream 2 is a joint venture between Russia’s Gazprom and five major Western European energy concerns. When completed, the pipeline will be able to ship up to 55 billion cubic meters of gas per year from Russia to Germany, doubling the existing Nord Stream network’s capacity, and turning Germany into a major regional gas hub.

In February, German media reported that the US was considering additional sanctions if Russia made a move to complete the pipeline, targeting either European energy companies involved in the project or the transited gas’s possible buyers.