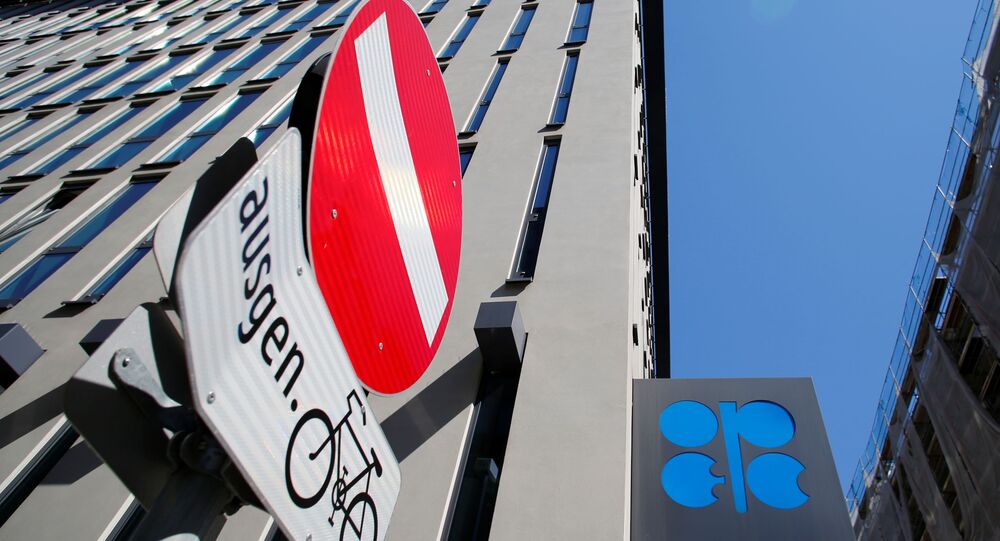 On Thursday, OPEC+ members gathered via online video conference to discuss the terms of a new oil output cut deal.

Azerbaijan's Ministry of Energy said in a statement that OPEC+ had adopted a new declaration on cooperation that envisages a three-stage reduction in oil production, which, if implemented, will cut oil production by 23%, or 10 million barrels per day.

The Ministry of Energy of Azerbaijan, a country which is one of the members of the OPEC+ format, said in the statement that Mexico had refused to accept the three-stage oil reduction, with output cuts of 400,000 barrels per day from October 2018 levels.

"During the ninth meeting of the ministers of the Organization of the Petroleum Exporting Countries in a format of a video conference, the new Declaration of Cooperation was adopted after some 11-hour discussions on condition that Mexico will accept the proposed cuts. It should be noted that the new Declaration of Cooperation envisages the three-stage reduction of the daily oil production compared to the level of October 2018," the ministry said.

If the deal is approved, the OPEC+ countries will decrease their daily oil output by 23 percent, or 10 million barrels compared to October 2018.

Earlier, the press office for the Kazakhstan Ministry of Energy said that OPEC+ had failed to reach an agreement by the end of the Thursday talks, but Kazakhstan expressed hopes that a consensus would be reached in the near future.

"As a result of eleven-hour talks the parties could not reach any agreement. Kazakhstan, in its turn, remains hopeful that in the future the consensus on collective reduction of oil production will be reached, which will impact positively on the oil industry", the Ministry of Energy's statement reads.

Kazakhstan, one of the states included in the OPEC+ format, noted in a statement that it is ready to join the deal, should it be sealed.

"We hope for the positive results of the upcoming talks. The disbalance that we observe on the global oil market shows that OPEC+ countries' efforts are not enough in this case and we need all market competitors to participate. In our turn, we understand the importance of today's agenda and we are ready to join the collective reduction of oil production", Kazakhstan's Energy Minister Nurlan Nogaev said.

He stressed that Kazakhstan has always met its commitments as an OPEC+ member.

Mexican Energy Minister Rocio Nahle tweeted that the country was ready to reduce the national oil production by 100,000 barrels per day in May-June.

According to the Azerbaijan Energy ministry, the adopted cooperation agreement envisages higher consecutive cuts in oil output - 400-320-240 thousands of barrels per day that correspond to each of the three stages.

The Kuwait oil minister tweeted that Mexico was 'obstructing' the agreement to cut oil output by 10 million barrels per day.

​A tweet reads: "At the extraordinary meeting of the OPEC+ group that ended at 3 a.m., Mexico obstructed the agreement of all member states to reduce oil production by about 10 million barrels per day. Kuwait held marathon talks in the past days, and during the meeting, to create a state of consensus among the member states in the hope of rebalancing oil markets."

A source in one of the delegations told Sputnik that Saudi Arabia said that "there would be no deal [without Mexico]".

Earlier, two sources told Sputnik that the Mexican delegation had left the video conference talks after failing to accept a consensus with the alliance on oil production limits.

The OPEC+ meeting took place on Thursday in a form of an online video conference, gathering OPEC+ members and other observer countries not part of the group to create a new oil output cut agreement in an attempt to stabilize the oil market struggling with the ongoing COVID-19 pandemic.