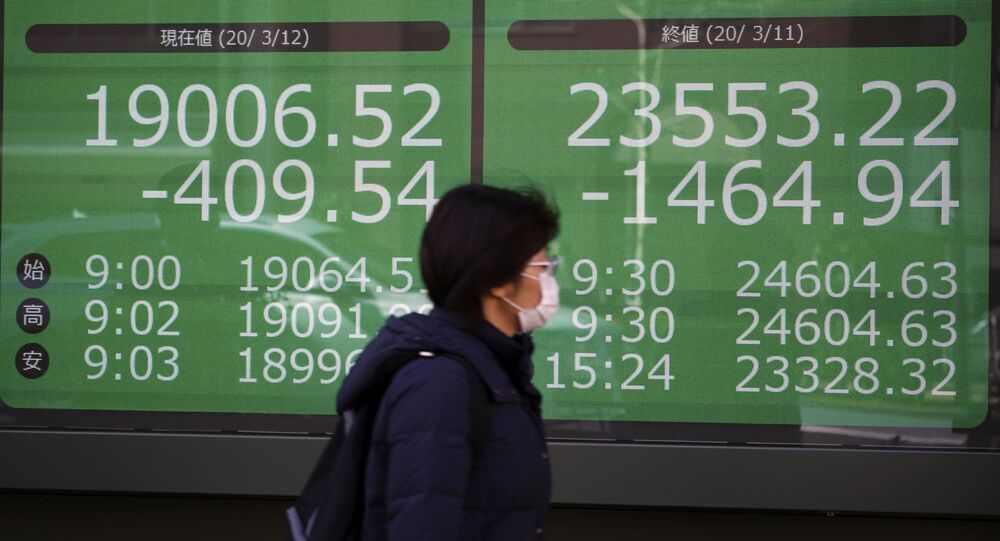 Previously, the spreading COVID-19 pandemic and measures taken by countries in a bid to contain it were called out by the head of International Monetary Fund Kristalina Georgieva as capable of wreaking havoc on the global economy equal to the 2008 global financial crisis, resulting in a recession, with recovery anticipated sometime in 2021.

Wall Street banks are warning that the global economy should brace itself for a loss of more than $5 trillion of growth over the next two years – greater than the equivalent of Japan’s annual output, reports Bloomberg.

As the COVID-19 pandemic has triggered nations to close borders, put lockdown measures in place and force businesses to close, experts acknowledge that the world is facing its greatest peacetime recession since the 1930s.

Although the downturn is predicted to be short-lived, it’ll take time for economies to make up the lost ground.

© REUTERS / TINGSHU WANG
People wearing face masks are seen at a shopping area in Beijing, as the spread of the novel coronavirus disease (COVID-19) continues in the country, China April 6, 2020.

Despite coronavirus relief packages being adopted by states to generate fiscal stimulus and boost the gross domestic product, the albeit short-lived downturn, claim forecasts, will impede a return to pre-crisis trends until sometime in 2022.

Global leader in financial services JPMorgan is cited as estimating the respiratory virus pandemic could cost the global economy at least $5.5 trillion in lost output - similar to the fallout from the global financial crisis in 2007—2008 and the recession of 1974-1975.

According to JPMorgan Chase & Co. economists, this equals almost 8 per cent of GDP through the end of next year, with recovery predicted by many experts to be sluggish, as states are encouraged to tread carefully to avoid reopening economies too soon. Measures to boost a rebound, claim economists, need to be weighed against the dangers of allowing the virus to return.

“Trajectory matters a whole lot… If your trajectory is positive, that is supportive of business confidence and supportive of individuals feeling they can go get a job. That’s a critical ingredient going into the second half of the year and 2021.”

Morgan Stanley investment bank and financial services company claims no matter what policy response nations resort to, GDP in developed markets can be anticipated to return to pre-virus levels no sooner than by the third quarter of 2021.

By the end of 2021, “lingering cost and scarring effect” will leave the US and European Union economies $1 trillion down on pre-COVID-19 expectations, warns Deutsche Bank AG.

Meanwhile the World Trade Organization which is due to virtually announce its latest forecasts next week, said on 8 April that the pandemic could result in more profound collapse of international trade flows than ever recorded in the postwar era.

Referring to the lockdown measures triggered amidst the pandemic, European Central Bank President Christine Lagarde said on 9 April that each month is costing the euro-zone economy 2 per cent to 3 per cent of economic output.

While the number of coronavirus cases and death toll are the numbers cited daily, they risk masking the human toll of the pandemic, state experts, as they point to the income losses registered by businesses, many of which shall be forced to go under, leaving people jobless.

This week the International Labor Organization said over 1 billion workers were at high risk of either pay cuts or being dismissed.

“It’s going to be temporary, but it’s putting stress on everything,” says Steve Schwarzman, chief executive officer of Blackstone Group Inc., as cited by Bloomberg Television.

Economists underscore the need for global coordinated approach to efforts to mitigate fallout from the pandemic, as the Bank for International Settlements cautions that disjointed measures might only result in a second wave of cases, adding that in a worst-case scenario US GDP would plunge to 12 per cent below its pre-virus level by the end of 2020.

“The recession we are likely to see, if emerging markets don’t come out of it by June, is something that could last many years, just like the Asian and Latin American crises… It’s likely to be a five or 10-year effect if the world doesn’t get together.”

Holger Schmieding, chief economist at Berenberg bank, notes that measures such as heavy restrictions on travel might need to remain in place until late 2020 or 2021 to prevent the COVID-19 pandemic from recurring, while fiscal support would require boosting if an upturn is to be hoped for.

“A major policy error could do serious damage. It would be easier to come up with darker forecasts. You just have to assume that the policy response won’t be quite adequate,” insisted the economist.

As the spread of the coronavirus across countries have left huge swathes of the global population at home, with many big factories closed, and travel, restaurant, and hospitality industries suffering a drop in revenues, the Head of International Monetary Fund Kristalina Georgieva warned of the damage potentially looming for the global economy over the COVID-19 pandemic.

"The outlook for global growth: for 2020 it is negative - a recession at least as bad as during the global financial crisis or worse. But we expect a recovery in 2021", Georgieva said.

The official noted that advanced economies stood a better chance to properly respond to the coronavirus' impact, while emerging markets could be hit the hardest.