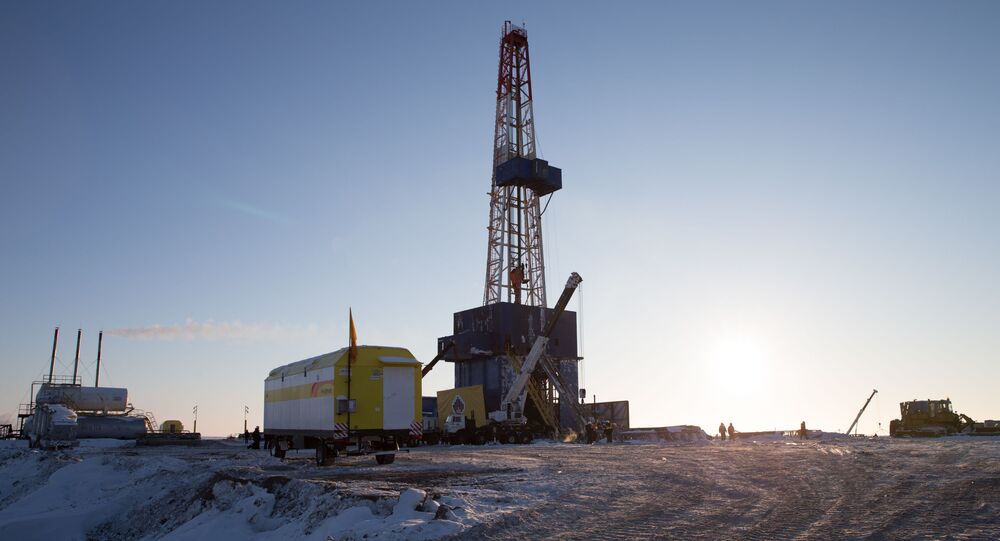 MOSCOW (Sputnik) - The ongoing fluctuations of oil prices were nothing to be happy about but nor have they been too dramatic, Rosneft CEO Igor Sechin said during the International Review program aired by Rossiya 24 television on Friday, adding that the company was ready for the unfolding scenario.

"Of course, fluctuations, with oil prices falling to such a low level as we see today, do not make us particularly happy, but do not make us feel any drama unfolding either", Sechin told reporters.

The Russian energy company was prepared for steep drops in oil prices due to the potential collapse of the OPEC+ oil production cuts deal, Rosneft CEO went on to say.

"We were ready for this scenario initially when the extension of the OPEC+ agreement to another quarter was discussed", Sechin recalled.

Sechin also expressed the belief that the oil market was going through a crisis due to several factors, such as politics, sanctions, and the coronavirus.

"The oil market is going through a crisis. Some factors are objective, and others are subjective, let us try to puzzle it out. For example, is there such a factor as political cycles? Yes, there is. The elections in the United States, for instance. The possible change of government in Saudi Arabia. This should be taken into consideration. The coronavirus factor obviously has some influence: a decrease in transport operation, aerial vehicles rejection and isolation of some of the global regions — all this certainly reduces consumption", Sechin said at the International Review program on Russia-24 broadcaster. "There is one more factor that I would like to draw your attention to, the factor of sanctions. It should be taken into consideration that it influences OPEC member states, apart from others. For example, Iran and Venezuela. Some restrictions have been imposed on Russia, certainly", he added.

According to the CEO, Rosneft’s operating costs will allow it to work for a long time in the current market conditions. The company is able to maintain the current oil production level for another 22 years without additional investment in prospecting.

“Our operating costs allow us to work in this mode for a long time. The resource base, in principle, even without additional investments in geological prospecting, allows production for 22 years without reducing volumes. Therefore, we feel confident enough, and we are convinced that we must adhere to market trends, and work on the market showing our effectiveness", Sechin said.

Oil Prices to Grow to $60 Per Barrel

The price for oil will grow to $60 per barrel by the end of 2020, Rosneft CEO Igor Sechin said, forecasting positive developments in the energy market within six months.

"I believe it may grow by the end of the year and return to the level of up to $60. If processes continue, shale oil will leave the market", he told reporters.

The CEO of the Russian energy company also expressed the belief that positive developments would be seen within six months already since the current low prices did not allow US shale oil producers to work efficiently. According to him, this will promote the normalization of the market.

Sechin stressed that Russia should seek to retain its share of the market regardless of oil price fluctuations.

"There is a sense in retaining the share of the consumer market. If you give up your share of the market, you will never return", he explained.

Rosneft’s operating expense (OPEX) is comparable to Saudi Aramco's operating expense, but since Rosneft does not engage in predatory pricing, its operational efficiency may be higher than that of the Saudi company, Rosneft CEO Igor Sechin said.

“Our operating expense is comparable to that of Saudi Aramco ... We have $3.1 per barrel of oil produced, they have about 2.5-2.8. So, we can work calmly and efficiently here as well, and we do not undercut competitor's prices, unlike them. Therefore, our efficiency maybe even higher," Sechin added.

"The sanctions have two sides: there are us, and there are our partners who, as a result of the sanctions, have lost enormous resources", Sechin stressed. "Sanctions have impacted our partners more than us. Well, let's say, before the sanctions, almost half of the financial support was provided by the US banks - up to $35 billion in credit lines. Now it's zero. They were earning up to $4 billion annually on interest rates only. Now it's zero. As you can see, here are the real results of these sanctions".