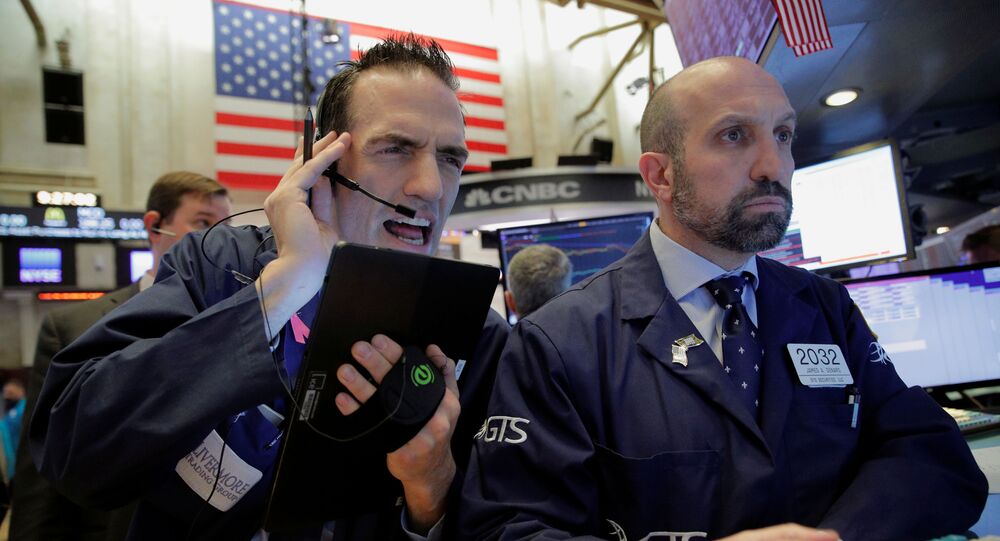 US stocks closed up about 5 percent on 10 March, rebounding from a historic loss on the Dow the previous day, as investors reacted to government stimulus measures planned to provide relief to individuals and sectors of the economy hurt by the coronavirus.

Moments after the stocks markets opened, trading on Wall Street's three main indexes was suspended, setting off an automatic 15-minute cutout for the second time this week.

All three indexes are down more than 20 percent from their most recent highs in February, denoting bear markets.

Trading resumed after stopping for 15 minutes, with the main indexes having dropped 8-9%.

All three main indexes have now dropped over 24% from their intraday record highs hit in February.

European Indexes Fall by More Than 10%

Major European stock indexes fell by more than 10% after the last meeting of the European Central Bank and its decision to keep rates at the current level, trading data shows.

© Sputnik / Alexey Filipov
Dollar Exchange Rate Exceeds 74 Rubles, as Russian Currency Plummets
The ECB, as part of the March meeting, kept the base interest rate at a record low of 0%. In addition, the regulator kept the deposit rate at minus 0.5%, although analysts expected it to decrease by 10 basis points.

Markets also drew attention to statements by ECB President Christine Lagarde that the coronavirus will have a significant impact on economic activity in Europe.

Meanwhile, the Russian stock market has intensified its fall, following the oil market, and is already trading at below 2,300 points on the Moscow Exchange (MOEX) index, according to trading data.

However, low oil prices and the fall of the ruble are not only creating risks, but new opportunities for the Russian economy, Prime Minister Mikhail Mishustin said earlier in the day, adding that the government was preparing additional measures to deepen import substitution in several sectors.

The price of gold has dropped by more than 3%, along with sales on world stock and commodity markets, according to trading data.

© AP Photo / Michael Probst
Bear Trend Ends Bull Run as Top US Indices Lose Nearly 20% of Previous Highs
Trump announced on 11 March a ban on travellers from 26 European countries entering the United States for a month in an attempt to contain the spread of the coronavirus.

Stock markets around the world tumbled on 9 March amid fears over the coronavirus disease, officially named COVID-19, and a fall in global oil prices after the OPEC+ deal collapsed.