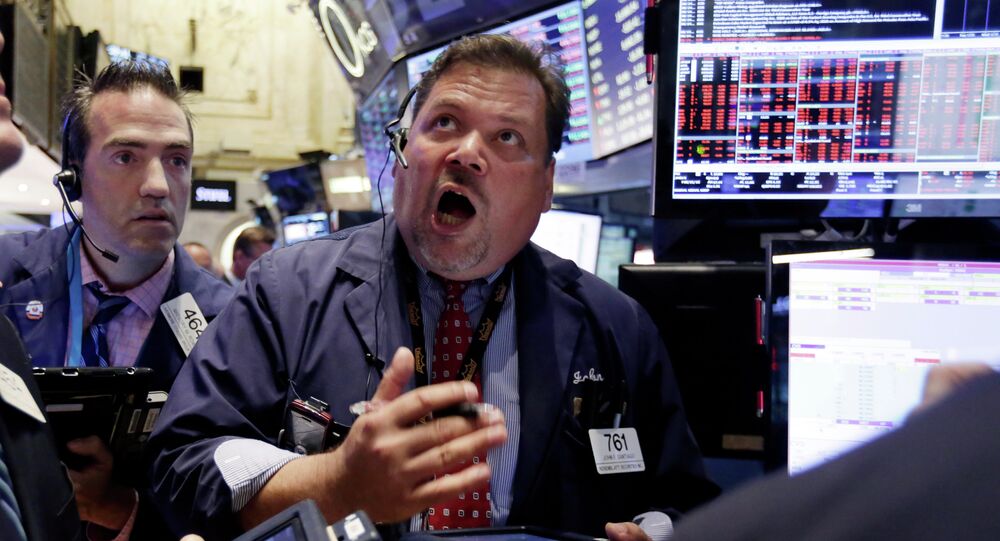 US Stocks Plummet 1,031.61 Points Amid Concerns Over Growing Coronavirus Cases

US stocks fell sharply Monday, tumbling more than 1,000 points as new COVID-19 coronavirus cases were documented by health officials, which promptly stoked fears that the spreading virus would draw out a slowdown of the world economy.

Monday’s closing figures marked the Dow’s largest one-day drop within the last six months and completely wiped out gains made in the year thus far, according to the Wall Street Journal.

“The second-largest economy in the world is completely shut down. People aren’t totally pricing that in,” Larry Benedict, CEO of The Opportunistic Trader, told CNBC, adding that some parts of the US market were stretched. “It seems like there’s much more to come.”

American Airlines and Delta Air Lines were struck particularly hard, seeing losses of more than 7%, while other travel-related stocks also took hits: Booking Holdings - the operator of Priceline and Kayak - fell by 6.7%.

Neither Apple nor its suppliers were able to escape the massive plunge. CNBC reported that shares of the tech giant were down by 4.3%, and that wireless chip providers Skyworks Solutions and Qorvo were both down by more than 3%.

Apple’s low figures come after the iPhone maker indicated that it did not expect to meet its quarterly revenue forecast as a result of slowed production and crippled demand in China brought on by the coronavirus, which originated in China’s Hubei Province.

Although US markets had documented declines in the previous week over coronavirus fears, the New York Stock Exchange’s (NYSE) new losses came as the viral outbreak worsened over the weekend. In a Monday briefing, the World Health Organization (WHO) indicated that new coronavirus cases had surfaced in Iran, Italy and South Korea, which brought infection totals in the respective countries to 60, 152 and 833.

"Does this virus have unlimited potential? Absolutely," Dr. Tedros Adhanom Ghebreyesus, the director-general of the health agency, said during the briefing. "Are we there yet? From our assessment, not yet."

"For the moment, we are not witnessing the uncontained global spread of this virus," he added.

Nearly an hour after the NYSE closed for the day, US President Donald Trump fired off at a tweet, stating that the stock market was "very much under control in the USA," and that the "stock market starting to look very good."

​The WHO officially recognized the virus as a public health emergency in late January. The agency’s latest figures note a total of 79,331 confirmed cases, of which 77,262 were documented in China. Outside of China, 2,069 cases have been confirmed by officials.