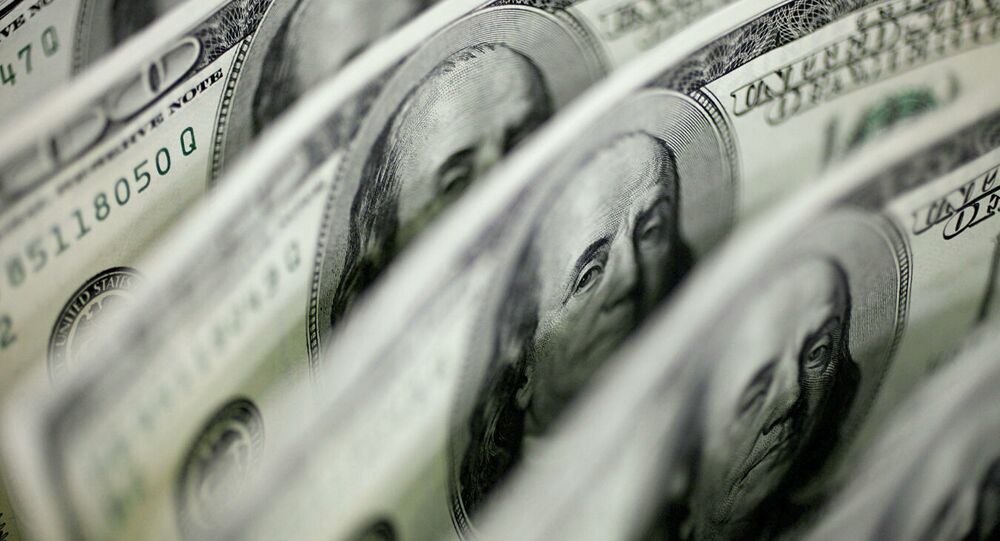 President Donald Trump has repeatedly slammed the Federal Reserve's monetary policy, which he claims is keeping the US dollar too strong and making it difficult for US companies to compete globally.

The US Department of Commerce has rolled out a new plan that it expects to be in line with President Donald Trump’s permanent push to ease America's national currency.

The new regulation stipulates that anti-subsidy tariffs should be slapped on those foreign competitors who are accused of undervaluing their currencies against the dollar.

The regulation, which will take effect on 6 April, will target products that are found to unfairly benefit from devaluation.

In a statement on Monday, Commerce Secretary Wilbur Ross praised the new rule as “an important step” to improve a system which he claimed put the US at a disadvantage.

"While successive administrations have balked at countervailing foreign currency subsidies, the Trump administration is taking action to level the playing field for American businesses and workers," Ross underscored.

The move comes amid Trump’s constant attacks on the Federal Reserve over it monetary policy, which he claimed was keeping the dollar too strong.

According to him, this hampers the export of goods and services, which in turn results in an increase in the trade balance deficit, which amounted to 853 billion dollars in 2019.

If the dollar becomes cheaper, foreign customers are expected to profit more from buying US goods and as a result, US production will receive an additional incentive for growth, with the foreign trade deficit set to decline.

The Fed should get smart & lower the Rate to make our interest competitive with other Countries which pay much lower even though we are, by far, the high standard. We would then focus on paying off & refinancing debt! There is almost no inflation-this is the time (2 years late)!

Late last month, Trump urged the Federal Reserve to “get smart and lower the rate to make our interest competitive with other countries, which pay much lower even though we are, by far, the high standard”.

“We would then focus on paying off and refinancing debt!” he wrote on his Twitter page.

Many have already described the call as a so-called “competitive devaluation”, which analysts said rides roughshod over the recently-clinched Phase One Trade Deal between Beijing and Washington.

Will the Fed Lower the Rate at the End of the Day?

Experts, however, have little doubt that Trump will finally manage to get the Fed to lower rates in a move that will lead to a weaker dollar.

Hans Redeker, chief currency strategist at Morgan Stanley, suggested that Trump’s constant calls to the Fed to weaken the dollar and switch to negative rates may negatively affect the US currency and significantly reduce the profitability of dollar assets.

The view is shared by strategists at US investment funds, including M&G Investments Ltd., Brandywine Global Investment Management and ABN Amro Bank. According to experts, in 2020 the US currency may lose three to five percent of its value. They predicted that the measure may be followed the Fed shifting to a more aggressive easing of its monetary policy.

In August 2019, Trump accused the Fed of doing “nothing” while the Euro continues its slide against the US dollar, claiming that the Fed doesn't "have a clue" about economic policy.

He suggested that (presumably foreign) "badly run and weak companies" were "smartly blaming" the US's "small tariffs" on imports "instead of themselves for bad management."

Earlier that month, Trump alleged that the Fed’s monetary policy is keeping the US dollar too strong and making it difficult for US companies to compete globally.

....in the world, there is nobody even close, but unfortunately the same cannot be said about our Federal Reserve. They have called it wrong at every step of the way, and we are still winning. Can you imagine what would happen if they actually called it right?

According to him, on a "level playing field," US companies, "the greatest companies in the world," would outcompete anyone. Unfortunately, Trump suggested, due to absent "substantial Fed Cuts...and no quantitative tightening," this will not be possible”.