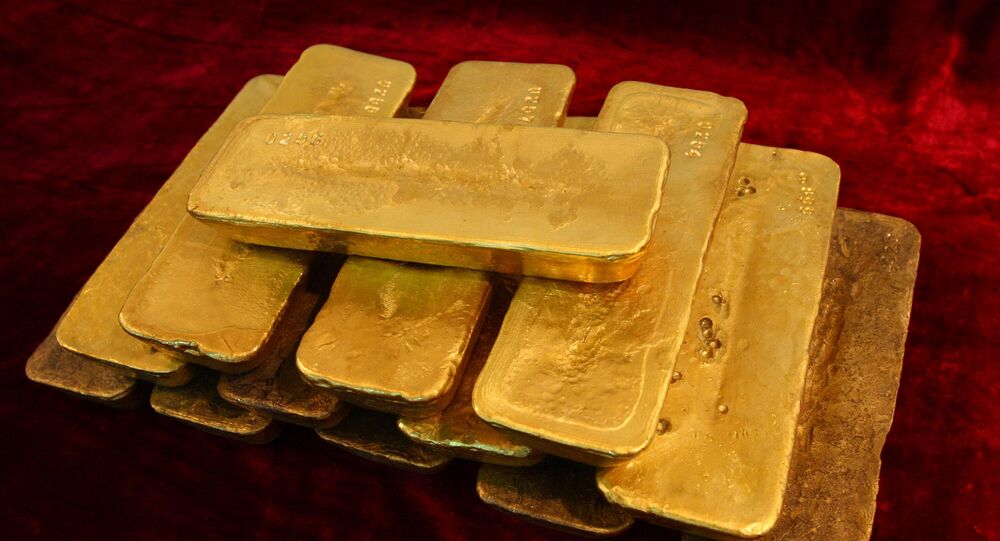 Traders have not only singled out the current favourable conditions for the growth of gold prices but also shared their tremendously bullish expectations for the asset’s performance next year.

It has been a good year for gold, which traded at a staggering more than 15 per cent higher than the year before. The gain is the strongest in almost a decade,  the South China Morning Post reported, citing the extraordinary uptick in the precious metal's value.

The gold price climbed over 1,551 USD per ounce on 4 September, amid a peak in general uncertainty in the markets, caused mainly by the US-China trade war. As the pair later worked to resolve the crisis, arriving at the first stage of a trade agreement, the gold price tumbled, while the renminbi and dollar showed apparent growth.

As of Sunday, 22 December, gold traded at 1479.6 USD thereby demonstrating the most significant annual leap since 2010, when it showed an eye-watering rise of almost 30 per cent.

"The main driver of the gold price this year has been lower global interest rates amid heightened geopolitical tension in Europe over Brexit, as well as the trade war between the US and China," said Stephen Innes, chief Asia market strategist at AXI Trader, noting the ongoing turmoil triggered fears of global recession and strengthened the gold trade.

"Ultimately, the softening global economy, as a result of the trade war, has forced central banks to lower interest rates which meant the risk-free cost of holding gold versus a lower US treasury yield," the expert pointed out, arguing the prospects for the precious metal likewise look good for the upcoming year.

Innes assumed the gold price would trade between 1300 USD and 1600 USD next year, depending on the outcome of trade talks.

Another gold trader, Jasper Lo, cited by the edition, offers an even more bullish take on gold's future, predicting its price may go up another 15 to 20 per cent next year to around 1774 USD.

"The protests in Hong Kong show no sign of ending soon, and that has been considered by investors as one of the international uncertainties. In addition, both China and India have faced inflation problems. Whenever there is worry over inflation, investors like to buy gold to hedge against the risks of inflation and hence drive the gold price to rise further," Lo said. Joshua Rotbart, founder and managing director of the Hong Kong-based J. Rotbart & Co, echoed Lo's stance.

"The increase in gold purchases by central banks, notably Russia, China, Turkey and Poland, reflects governments' growing worries about their abilities to stabilise their currencies in this uncertain climate. Low and even negative interest rates make gold more attractive as a safe alternative to government bonds," Rotbart said, rounding off that he and his colleagues "are bullish on gold."

The US-China trade war hugely impacted the second-biggest economy's growth this year, propelling it to its slowest pace in decades. At the same time, Hong Kong entered a recession for the first time in 10 years in the third quarter of 2019, as anti-government protests took a toll on the retail and tourism sectors.

Optimistic forecasts, however, prevail in the wake of Donald Trump's announcement of a "breakthrough" in trade talks with China on a new deal. Last week Mnuchin also noted he was "very optimistic" the Phase One trade deal with China would be signed by January.

Gold prices are believed to be driven up due to strong demand from Russia, China, Poland and other countries' central banks. According to recent data released by Russia's finance ministry, Russia produced over 185.1 tonnes of gold in the first six months of 2019, marking a 17.77 per cent rise compared to the same period last year.