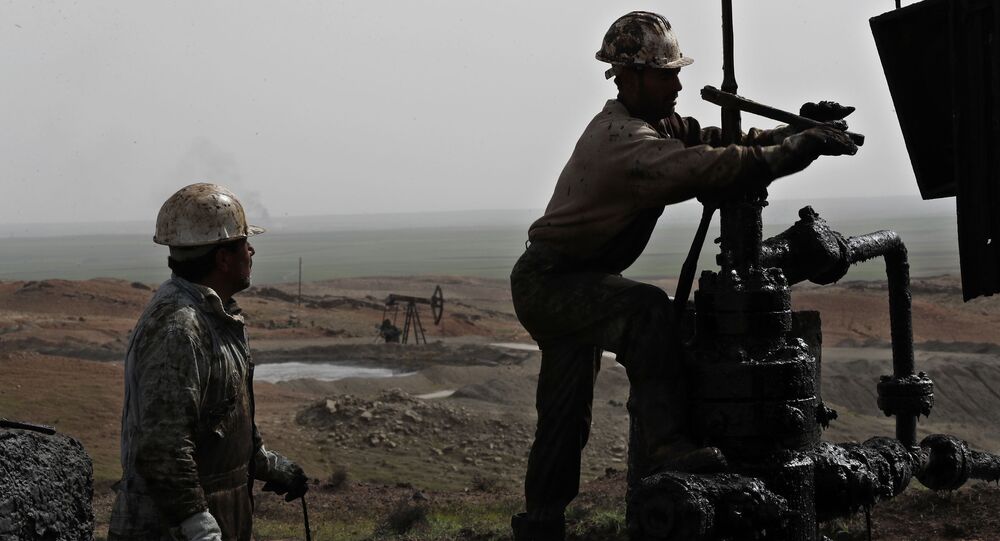 US President Donald Trump has repeatedly boasted about his administration’s plans to “keep” Syria’s oil, in contravention of international laws against pillaging. Meanwhile, the Russian Defence Ministry has publicized an intelligence report estimating that US oil smuggling operations in eastern Syria are already earning the US $30 million a month.

The United States will never be able to turn a profit from Syria’s oil, even if it took control of the entire country and somehow managed to double prewar production, Karam Shaar, a Syrian-born economic analyst at the Treasury of New Zealand, has calculated.

In a recent op-ed for the Carnegie Middle East Center, a Beirut-based think tank, Shaar and Armenak Tokmajyan, a Carnegie researcher, explain that even before Syria was thrust into its foreign-backed civil conflict in 2011, the country was never a major energy power, and this situation has only been exacerbated over the past eight years.

In 2011, Syria's oil output amounted to about 375,000 barrels per day. This was enough for the country’s internal needs, and provided 35 percent of Syria’s total export earnings, but was just a fraction of the output of regional neighbours Iraq, Iran, and the oil rich Gulf Kingdoms, who enjoy production measured in the millions of barrels of oil daily.

Production fell catastrophically as the war dragged on, hitting just 33,000 bpd in 2014, as the Daesh (ISIS)* terrorists began capturing broad swathes of eastern Syria, where about three quarters of the Arab Republic’s oil reserves are concentrated, and setting up two-bit smuggling operations. As the terrorists were pushed backed, control of northeastern Syria switched to the Kurdish-led Syrian Democratic Forces and their US allies, who liberated Daesh-held fields, but refused to share their newfound wealth with the Damascus, the oil’s legal owner under international law.

In late October, the Russian military released a detailed report on US oil-smuggling activities in eastern Syria, complete with satellite intelligence data, revealing that the Pentagon, CIA and private military contractors were working with the Kurds and US-controlled oil companies to engage in an oil smuggling operation raking in over $30 million per month from the remnants of Deir ez-Zor province’s oil infrastructure. But that's far from enough to justify the costs of the continued US Syria deployment.

In recent weeks, amid the redeployment of US troops away from the Syrian border with Turkey, President Trump has repeatedly boasted that US forces would stay in Syria to “keep the oil,” sparking widespread condemnation from the international community.

However, as Shaar and Tokmajyan point out, “taking control of Syria’s oil, as Trump has vowed, is hardly economically feasible” from America’s perspective, and may actually be just a ploy for its broader ambitions.

“Assuming a US oil company were to invest in fixing the Syrian oil sector’s infrastructure, which would take money and time. Assuming also that it were to return production to the prewar level of 375,000 bpd, it would still not make up for the cost of US intervention, which was $13 billion in 2018 and budgeted at $15.3 billion for 2019. At $60 per barrel, the company would need to increase production from the current 30,000 bpd to 593,607 bpd just to break even with regard to the costs of US intervention. And that’s not counting extraction costs, royalties to any Syrian body, or wage premiums to compensate for working in a dangerous environment, among other costs,” the observers explain.

According to Shaar and Tokmajyan, given the paultry prospective profits, it’s little wonder that not a single major oil company has expressed any public interest in President Trump’s initiative of “seizing” Syria’s oil.

Instead, the analysts suggest that Trump’s “keeping the oil” rhetoric may be just an excuse cloaking Washington’s real objective – holding leverage in Syria “over Iran, the Syrian regime, and Russia, which partly explains the strong bipartisan opposition to a complete US withdrawal.”

As an added bonus, they say, the continued control of oil fields is “crucial to allowing [the US’s] Kurdish ally to continue to benefit from oil revenues,” even if it's at levels far below pre-war production levels.

In other words, while Damascus sees oil as a crucial tool in helping the country to rebuild from a devastating conflict which has caused up to $400 billion in damage, to Washington, it seems to be just a bargaining chip for its regional geostrategic ambitions.