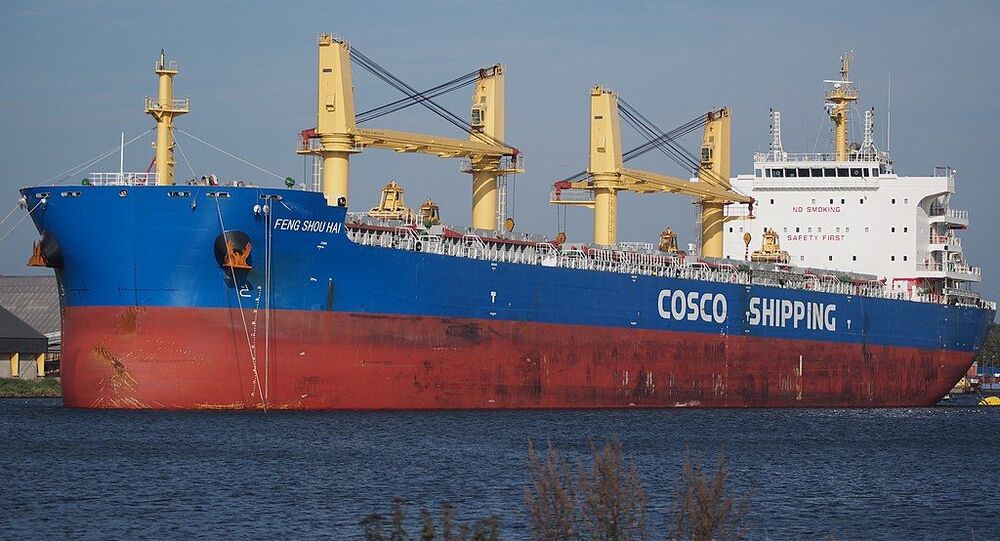 While Cosco reportedly seeks to move ships out of those units subjected to US sanctions, it remains unclear if more of the company's ships might fall victim to US punitive measures in the future.

The prospects of global freight tariffs now apparently depend on the fate of some 15 tankers belonging to Chinese shipping and logistics company Cosco, which currently lie idle off the coast of China, Bloomberg reports.

The vessels in question belong to a unit of Cosco that was recently hit by US sanctions for transporting Iranian oil.

According to the media outlet, “global freight rates are likely to remain supported” as long as the tankers remain in this state, with the situation being further complicated by the fact that customers seemed reluctant to book Cosco ships due to fears of being subjected to US sanctions.

“The ships are likely waiting for more sanction clarity after December 20,” said Michal Meidan, director of the China Energy Programme at the Oxford Institute for Energy Studies.

She also added that this process “may take a while”, and that the ships in question, along with some of Cosco's other vessels, might “remain offline for a few more months”.

The media outlet further notes that while shipping fees have already “retreated” after spiking in the wake of the announcement of the aforementioned US sanctions, they still remain “well above where they were.”

At this time it remains unclear whether more Cosco ships might end up being sanctioned, while the company apparently attempts to move ships out of its units affected by the US' punitive measures.

“It’s hard to predict an outcome here, especially if the COSCO sanctions become immersed in the protracted, erratic trade, geopolitical and diplomatic skirmishing between the US and China,” John Driscoll, chief strategist at JTD Energy Services Ltd, said. “Sanctioned vessels can’t hold out indefinitely and may already be devising loopholes to circumvent the restrictions.”

Earlier this month, Iranian Vice President Eshaq Jahangiri claims that Tehran is continuing to sell oil despite US interference.

The  US brought back its energy-related sanctions against Iran last year after Washington unilaterally pulled out from the 2015 nuclear deal, in a bid to pressure Tehran to negotiate a new agreement.

The US sanctions also discourage foreign companies from doing business with Iran, prompting Tehran to search for ways to avoid them.